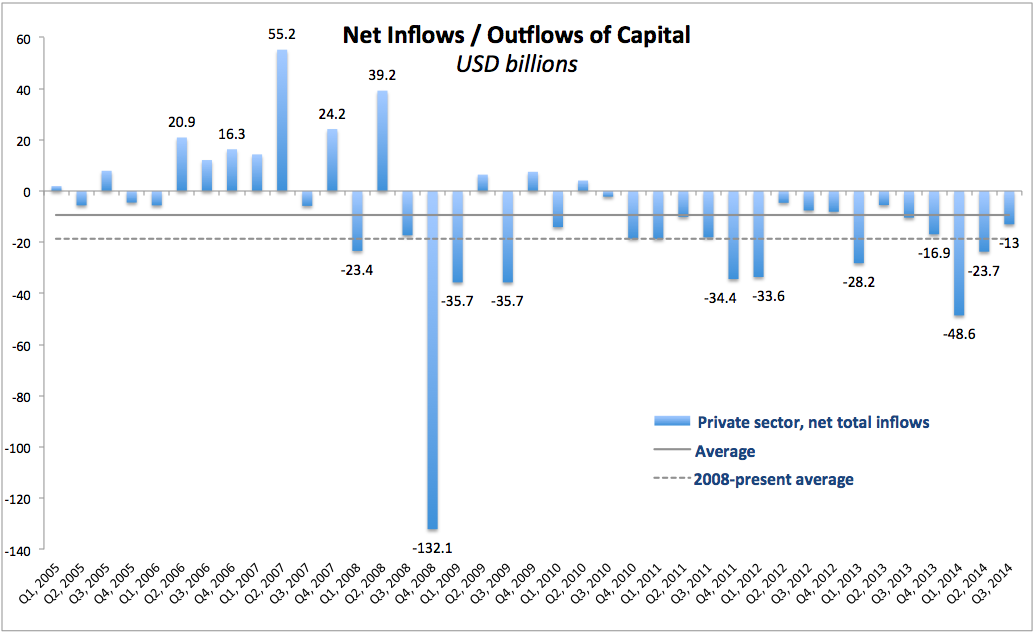 Looking at the composition of outflows, USD16.1 billion of net outflows over the first nine months of 2014 came from the Banking sector - which is worse than the same period 2013 (USD10.9 billion) and 2012 (inflows of USD9.6 billion), but better than the same period of 2011 (outflows of USD17.3 billion). 2008-present quarterly average Banking sector net outflows stand at USD3.72 billion, which suggests that current nine months cumulative outflows exceed average by about USD4.9 billion.

Non-financial sector net outflows for 9 months through September 2014 stood at a massive USD69.2 billion, which is well ahead of same period outflows in 2013 (USD33.3 billion), 2012 (USD55.4 billion) and 2011 (USD29.8 billion). On average, since 2008, net non-financial sector capital outflows are running at USD14.93 billion per quarter. This implies that current running rate of outflows from the non-financial sectors (for Q1-Q3 2014) is some USD24.4 billion ahead of average. 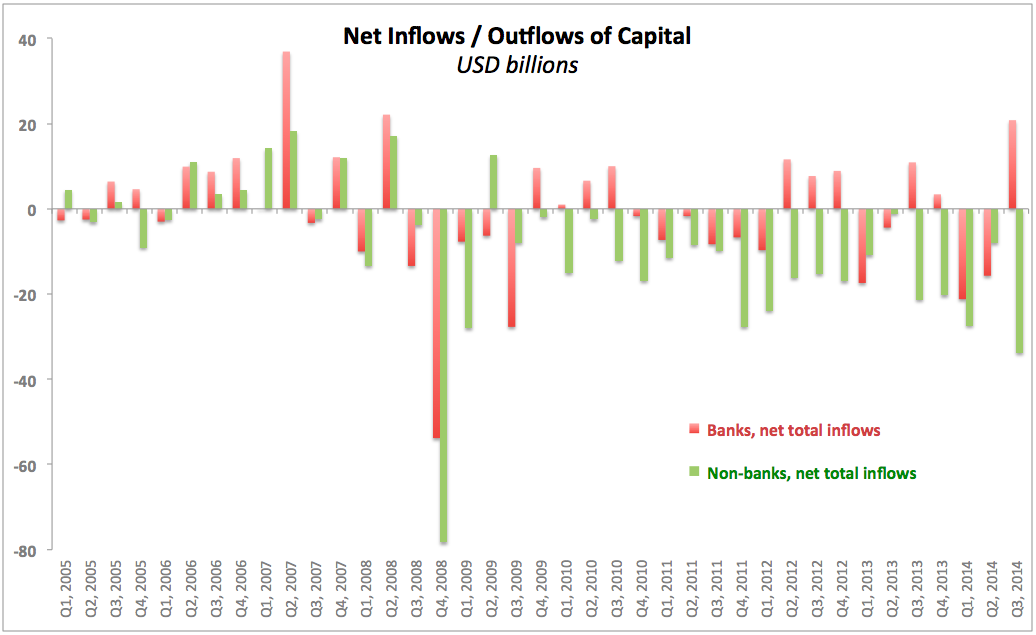 Chart above clearly shows that Q3 2014 non-financial sector outflows have been the worst since Q4 2008, while Q1 2014 outflows in the sector were the 5th worst since the start of 2005.

Overall, the above shows that while some of the media claims may be overstating the extent of the capital outflows deviation from their historical (pre-Ukraine crisis) trends, at the same time, current rates of outflows are of significant concern and cannot be sustained for much longer. The core issue is that non-financial sector outflows can only be stopped or significantly reduced by imposing some sort of capital controls - either in their direct form or via de-offshorization of the domestic investment.

The former will be a very tough pill to swallow for all sectors of the economy and will damage significantly the ruble. The latter is a political sensitive issues as it would involve change in the status quo practices whereby medium-sized and larger enterprises offshore aggressively investment funds to remove these out of the reach of domestic authorities.

Interestingly, if President Putin does follow through on the promise of substantial reforms aimed at reducing state interference in the economy and alleviating pressures arising from corrupt state officials practices, the de-offshorization of the private sector investment can be put in place much less painfully and much more efficiently. See more on this here: http://trueeconomics.blogspot.ru/2014/11/19112014-two-articles-on-russian.html

Posted by TrueEconomics at 8:45 AM