Euromoney Country Risk published an interesting analysis of the country risk scores for Russia. Here are some of the highlights (link up once Euromoney produce undated note).


"As sanctions and falling oil prices force the rouble’s slide, country risk experts are questioning the ability of privately owned and/or state backed
banks and corporates to obtain credit and repay their debts amid capital flight and an economy in decline Russia’s country risk score has fallen precipitously this year, in tandem with Ukraine."

The beef is in the details: "An 8.3 point correction since 2013, to 46.2 points out of a maximum 100 available, has sent the sovereign careering 17 places down ECR’s global rankings to 71st out of 189 countries worldwide. That marks a lower score compared with 2008, indeed the lowest since Russia defaulted in 1998, with the sovereign slipping into the fourth of ECR’s five tiered groups commensurate with a B to BB+ credit rating, signalling its triple-B credit ratings are overdue a downgrade." 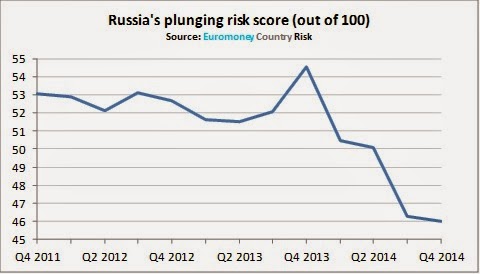 Per ECR: "Russia’s plight is understandable. Oil prices have come off their peak since June, falling more than $30 per barrel to $81, as of Thursday."

You bet. Here's the updated chart: 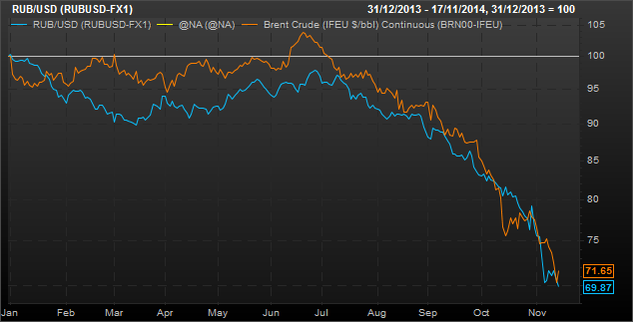 As I noted before, oil price leads Ruble, not the other way around. And also note volatility in recent days - as predicted here: http://trueeconomics.blogspot.ie/2014/11/7112014-russian-ruble-rough-days-ahead.html

Back to ECR analysis: "With sanctions causing an estimated $130 billion of capital outflow this year, according to the central bank, the rouble has plunged to $46/$, depreciating by 42% since the end of 2013 and forcing an abandonment of its target corridor in favour of a (virtual) free float absorbing the shock and preventing forex decline."

The point worth mentioning here is that capital outflows recorded are official flows, which include:

"Russia’s FX reserves totalled $429 billion as of end-October, down from $524 billion the year before. The true total is a little lower due to adjustments for the reduced valuation of gold reserves and changes in official agency reserves."

Note, I wrote about the latest foreign reserves position figures here: http://trueeconomics.blogspot.ie/2014/11/11112014-another-wild-ride-for.html these stood at USD416.23 billion at the end of October, excluding IMF-held funds, SDRs, and covering only gold and foreign exchange.

Danske Bank analysts "believe the $50 billion FX repo facility is “reasonable
enough to cover the most urgent needs of Russian corporations regarding their external debt repayments” through to 2016. Some banks, after all, have surplus liquidity that can be redistributed to those in need, and the central bank’s forex stockpile is sufficient to imbue some confidence in averting a crisis."

Kaan Nazli, senior economist at Neuberger Berman "expects a turnaround next year “due to the currency devaluation effect, and as private sector debts are
paid down with refinancing options limited by the sanctions.”

My own comment quoted in ECR note is as follows: I do "not believe a sovereign or even selective (large scale) private sector defaults are likely in the short term in spite of some talk of difficulties. “Such an event is not in the interest of the Russian authorities and can be prevented by using the existent foreign exchange reserves cushion,” he says. However, if oil prices remain low for a prolonged period and, simultaneously, Russian companies’ and banks’ access to foreign funding is severely curtailed, “we are likely to see a significant uplift in sovereign and banks’ credit risk”, he adds."


My 'wider angle' view to add to the above comment is as follows:

In my opinion, Russian Ruble dynamics vis-a-vis the USD and EUR are underlining the overall structural and geopolitical pressures on the Russian economy.

Amongst the structural factors, the largest weight can be assigned to the developing risks to economic growth, that have been at play since H2 2012 and H1 2013.

However, additional pressures are now being presented by the geopolitical factors, namely the crisis in Ukraine and the related sanctions on Russian companies and banks, including the indirect effects of these sanctions.

Decline in the oil prices - triggered in part by the sluggish global demand, and in part by the geopolitical decisions of the Gulf countries to withdraw supply-side support for oil - a having a significant short term impact on Russian exports revenues and are driving down Ruble valuations. Financial sector sanctions have de facto cut off all Russian companies and banks (including those not explicitly covered by sanctions) from the largest foreign funding markets, triggering high outflows of capital (as Russian companies pay down their maturing foreign currency loans exposures instead of rolling them over). As the result, Russian international reserves have been depleted from USD524.3 billion at the end of October 2013 to USD428.6 billion at the end of October 2014 (although one must take into the account reductions in this figure due to lower valuation of gold reserves and changes in official agencies reserves).

Going forward, changes in the inflationary environment, global and Russian economies dynamics, as well as continued demand for corporate and banks' deleveraging from foreign debt exposures, we can expect more downward momentum in the Ruble valuations and more pressure on the Government fiscal position.

However, devaluation of the Ruble and decline in oil prices do not have a linear one-to-one effect on sustainability of Federal fiscal balance sheet, as Government expenditure is denominate in Rubles, not US dollars or Euro. Furthermore, decline in oil prices is also not translating in one-for-one decline in Russian external balances, as Russian economy is capable of very quick and deep correction in imports demands, as 2009 experience clearly indicates.

As the result, in the short- and medium-term (up to 18-24 months), I do not foresee a significant acceleration in the risk of either a Federal or selective (large scale) private sector defaults. However, if WTI price stays for a prolonged period of time (2+ years) below USD95/barrel and, simultaneously, Russian companies' and banks' access to foreign funding remain severely curtailed, we are likely to see a significant uplift in sovereign and banks' credit risk.

Risk of selective (bank of corporate) default event is harder to asses than sovereign risks, but I do not expect - at this point in time - a large-scale event involving any big Russian corporates. Such an event is not in the interest of the Russian authorities and can be prevented by using the existent foreign exchange reserves cushion. The material risk here is that a number of larger Russian banks and companies, impacted severely by the sanctions, are likely to see dilution of the current shareholdings of foreign and domestic investors, as any liquidity support from the Government will likely see issuance of new equity to the state.

Posted by TrueEconomics at 5:58 PM