26/11/2014: Juncker Start: Making Sure No Lessons of the Crisis Have Been Learned


More debt, more guarantees, more bureaucrats-administered 'help for the real economy' - it's business as usual in Brussels with the new Commission's plans for a 'EUR300bn investment fund'. 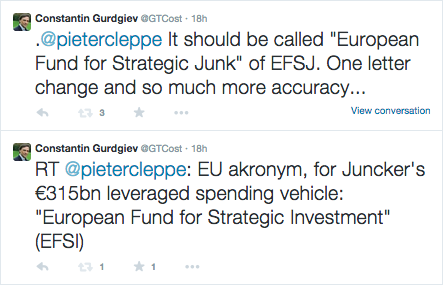 The problems, as I outlined in the comments on twitter and to EUObserver above, are multiple:

Signs of the above miracle are already in place. Take the 'investment committee' of the fund. Allegedly it will be composed of 'experts' from the member states appointed by the Commission. That is a double risk - politically appointed domestic experts counter-selected by the politically motivated EU officials. It is a prescription for double vacuum of independence.

The experts will base their project assessments on the basis of commercial and societal perspectives. Have you ever heard of such criteria for investment in a 'real economy'? No, me neither.

Next, we have the targets. The fund is to focus its efforts on co-funding 'high risk' PPP ventures where private capital has no interest to invest in due to very low risk-adjusted returns.  How on earth can anyone call high risk PPPs a part of the real economy is a philosophical question for the good times. In the middle of a growth crisis, when resources are even more scarce, it is a question of who gets returns and who carries risks. Under  the 'pioneering' idea of Mr. Juncker, the public (EU and sovereigns) will carry risks, private investors will get returns (or higher risk-adjusted returns). It is about as pioneering as suggesting that the banks should be made whole on their losses using public insurance: the entire history of the current crisis is one Junckerian Investment Fund.

Posted by TrueEconomics at 8:50 AM