BCA Research are usually not known for silly charts and comparatives. But yesterday, they did produce a blooper … 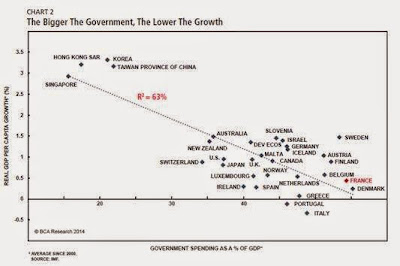 As chart above (via BCA) shows, there appears to be a strong linear relationship between higher Government Spending as % of GDP (averaged over 2008-2014) and lower real GDP per capita growth. In fact it is very strong - at 63% explanatory power (as measured by R-Sq).

The problem with the above chart is that
1) There are likely influential outliers in the data - Hong Kong, Korea, Taiwan and Singapore
2) We are not quite certain that a linear relationship is a reasonable one
3) There are questions with the sample range: for example 2008-present is a sample covering the period of higher spending due to crisis (including banks measures, but also automatic stabilisers, such as unemployment insurance etc), and
4) GDP per capita is a better metric than GDP itself, but it disfavours younger economies and older economies (where a greater share of population is not at work due to age, education and training) in contrast to middle-aged economies.

So here is the exercise carrying across longer range of data (2000-2014 averages) and on the basis of actual real GDP. 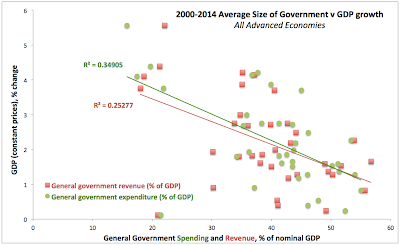 Chart above shows that positive relationship continues to exist when we switch to a longer period average and base our estimates on real GDP metric, as opposed to GDP per capita. It also shows that the relationship is pretty similar for the measure of Government size either by expenditure or revenues. The former is more subject to change over time due to banks rescue measures, while the latter is more prone to change due to GDP changes.

Also note, I run analysis for logarithmic and cubic relationships and these confirm the above R-Sq readings, suggesting that a linear relationship is a reasonably good approximation to reality.

However, we still have the potential problem of outliers in the above. Which appear to be the same ones as in BCA case. So I take 1.5 sigma weight to the mean for each data set and remove all observations that fall outside 1.5 sigma range. This removes 4 countries altogether from the set and also removes another 2 countries from the set covering Government Revenue. 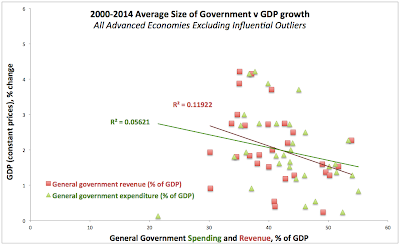 Which strongly suggests that BCA findings are biased to the upside in terms of reported relationship between the size of Government and GDP by:
1) Demographic effects; and
2) Idiosyncratic factors relating to four Asia-Pacific Tiger economies.

Note: I tested the second set of estimated relations for sensitivity to model specification, including non-linear models (log, cubic, quadratic and exponential) and the result stands - there is no statistically significant relationship.

Posted by TrueEconomics at 1:42 PM