According to the index methodology, "traditionally, a nation’s prosperity has been based solely on macroeconomic indicators such as a country’s income, represented either by GDP or by average income per person (GDP per capita). However, most people would agree that prosperity is more than just the accumulation of material wealth, it is also the joy of everyday life and the prospect of being able to build an even better life in the future. The Prosperity Index is distinctive in that it is the only global measurement of prosperity based on both income and wellbeing."

This post covers my analysis of the Legatum data for Ireland compared to our European peers, covering two peer groups:

Overall, 2014 Prosperity Index ranks Ireland as 12th most prosperous nation in the world and 8th in the European region (combining 40 countries). This means that Irish rankings remained unchanged on 2013 levels both globally and within Europe. Over 2013-2014, Ireland's rankings deteriorated by 2 place worldwide. 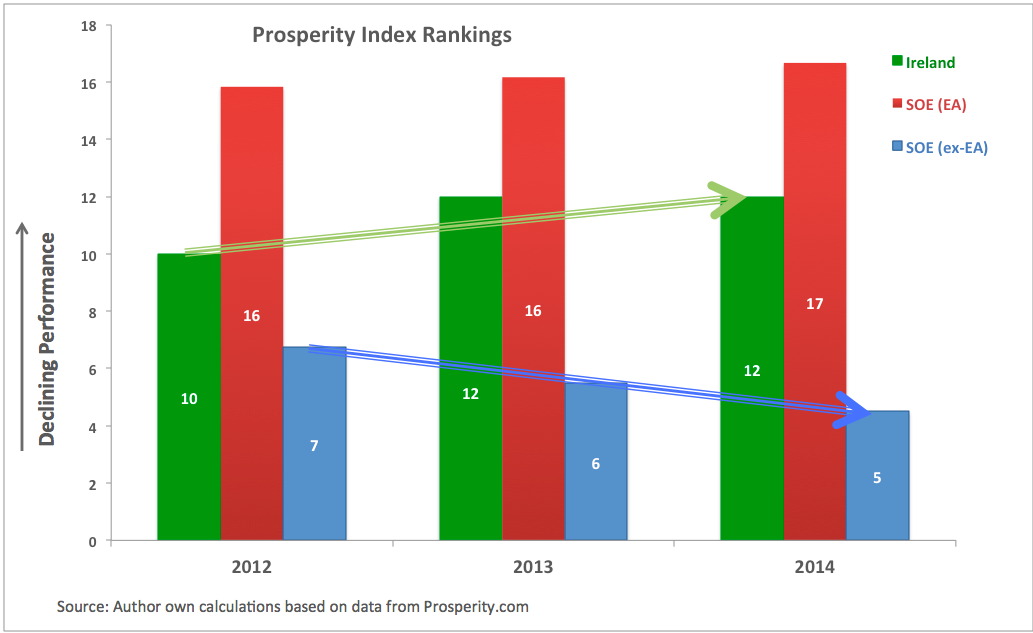 Very similar dynamics in Ireland's performance are also evident in almost all of the eight sub-categories of the rankings.

While Irish global ranking in the economy sub-category improved from 33rd in 2013 to 29th this year, the latest ranking remains significantly worse than 2012 Index position (25th). For our peers within euro area, average rankings in 2012-2014 were 21st, 28th and 27th, respectively - a slightly better performance than Ireland's. Meanwhile, our peers' average rankings for SOE ex-euro area have consistently improved from 21st in 2012 to 17th in 2013 to 14th in 2014. Despite the officially-registered booming GDP and GNP growth, Ireland still lags behind both the advanced euro area small open economies average and ex-euro area economies average.

The gap between Ireland's rankings (2012-213 at 14th place, 2014 at 16th place worldwide) in Entrepreneurship and Opportunities sub-category and the performance of the ex-euro area SOE group (average rank of 5th in every year between 2012 and 2014) is getting wider. Significantly, after several years of talking up targeted entrepreneurship policies reforms, Ireland is showing deteriorating performance in this sub-index, with our world wide position falling from better than euro area average 14th place in 2013 to 16th (matching the exact average for the SOE euro area economies) in 2014. 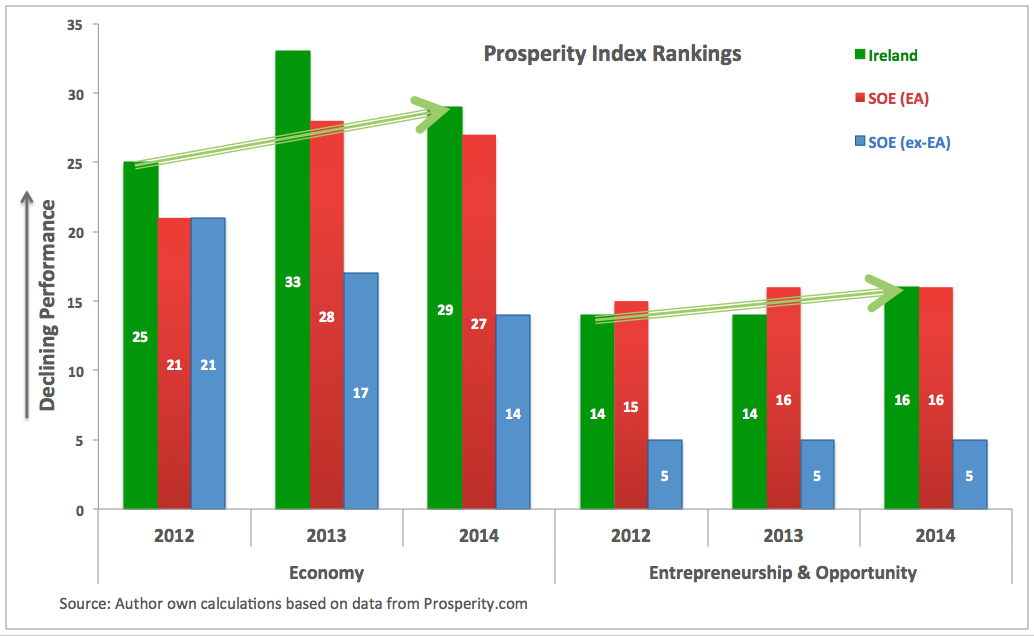 Another area targeted by numerous structural policies in recent years is institutional and governance reforms. 2014 Legatum Prosperity Index ranks Ireland 14the in the world in quality of governance - with no change in the rank on 2012 and 2013 levels. Despite much of an effort to clean up and improve Irish institutional systems, our rankings show identical dynamics as that of our euro area peers. Meanwhile, our non-euro area peers' performance has improved from the average 9th rank in 2012 and 2013 to the average 7th rank in 2014. While slightly outperforming the SOE euro area average ranks (16th), Ireland's gap to non-euro area SOEs has widened from 5 places in 2012-2013 to 7 places in 2014. 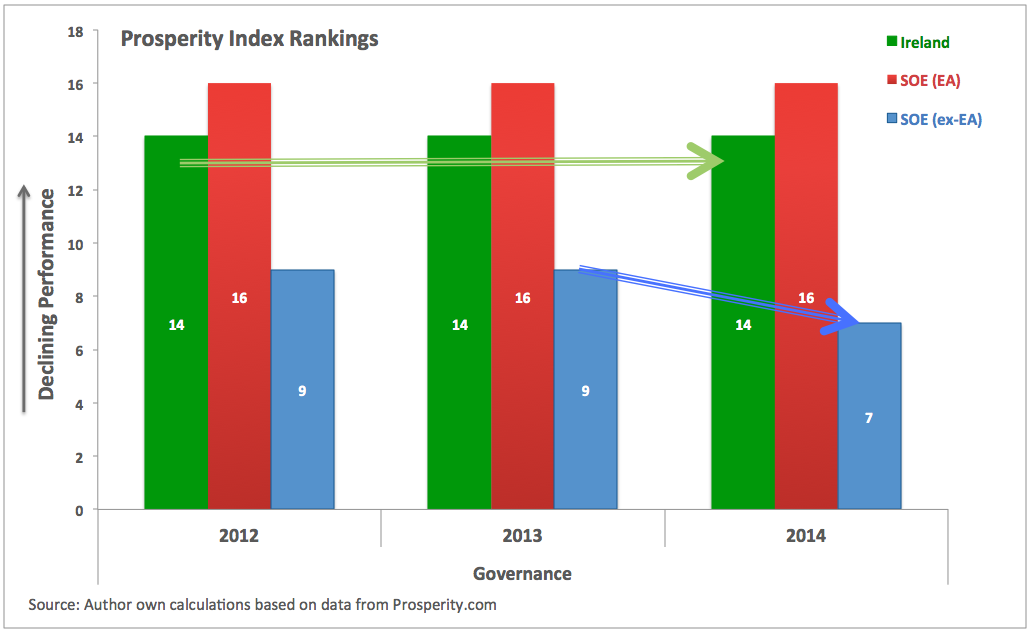 In terms of core public services, such as health and education, the picture is more mixed. In education sub-category of the 2014 Legatum Prosperity Index, Ireland ranks respectable 8th, which represents an improvement on 2013 and 2012 positions (11th and 14th respectively). Here we outperform our euro are and non-euro area peers, although the gap in favour of Ireland to non-euro area peers group is closing, falling from 5 places in 2013 to 2 places in 2014 rankings. In contrast, in health services, Ireland's performance is rapidly deteriorating in absolute and relative terms. In 2012-2014, our euro area peers average rank stayed stable at 12th. Ditto for our non-euro area peers, whose average rank remains steady at the 9th place worldwide. Ireland's global rankings slipped significantly, from 11th place in 2013 to 15th in 2013 and 17th in 2014. If in 2012 we outperformed our euro area peers' average by 1 place, in 2014 Ireland showed an underperformance relative to this group of 8 ranks. 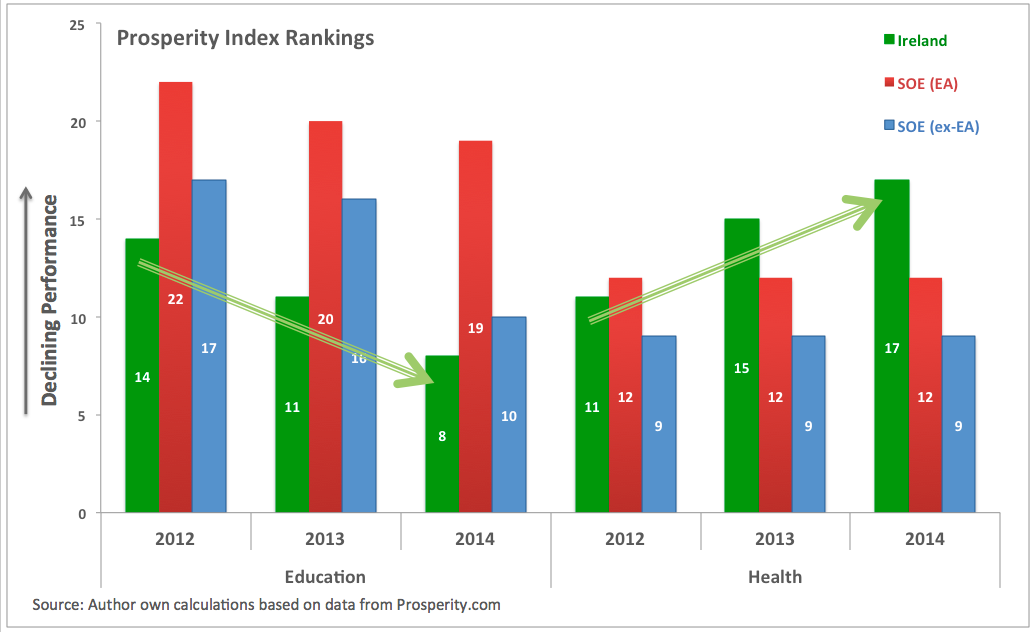 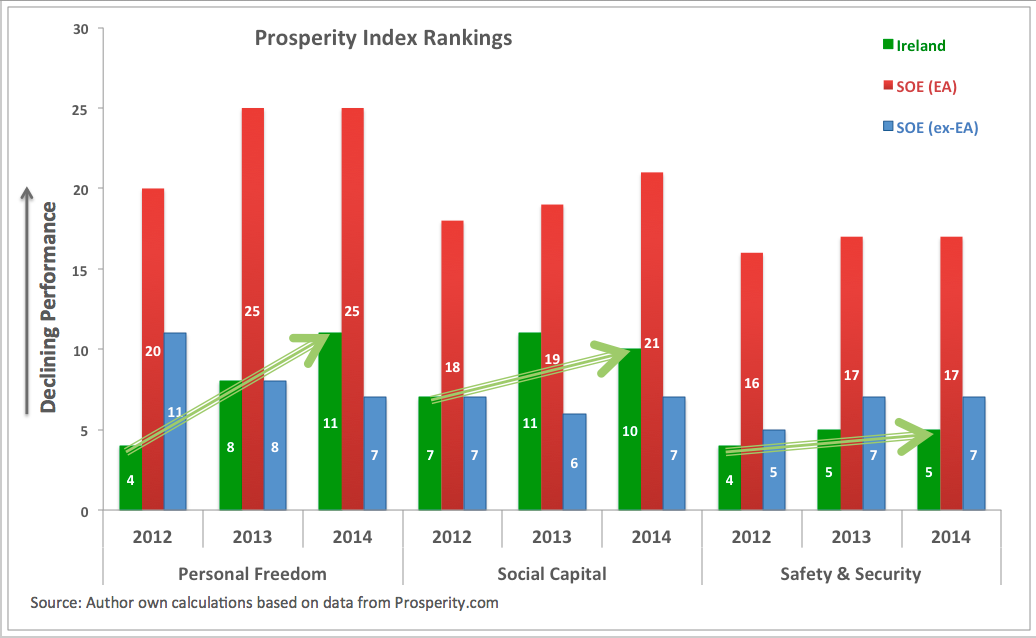 While Legatum Prosperity Index rankings are not comparable across 2009-2011 and 2012-2014 years, actual index scores offer some indication of our performance in absolute terms in 2014 period compared to 2009-2011. Chart below shows changes in the index and sub-categories in 2014 compared to peak performance in 2009-2011. 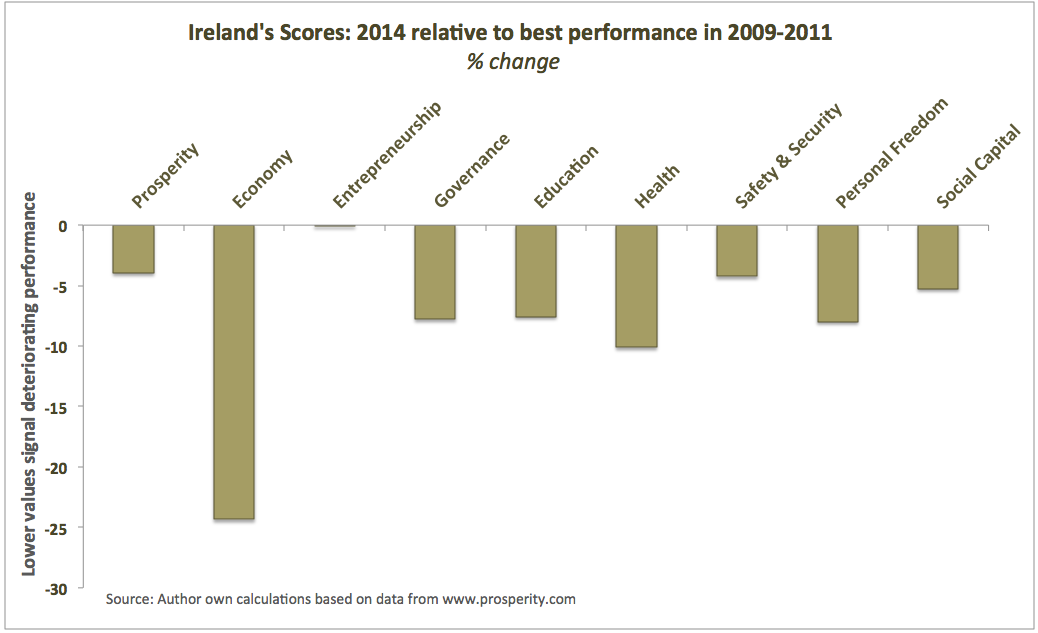 All sub-scores that form the overall Prosperity Index are showing poorer performance in 2014 compared to their peak performance in 2009-2011 period. Index scores are reflective of country own performance, as opposed to country ranks which show relative performance compared to other countries covered in the surveys. As the chart above clearly indicates, in all sub-categories of the Legatum Prosperity Index, Ireland performs poorer today than in 2009-2011. Aside from the economic performance deterioration, Ireland's scores suffered significant declines in health, personal freedom, governance and education - all areas targeted by public sector reforms enacted by the current Coalition.

To summarise: while overall rankings for Ireland present a rather positive picture of our socio-economic institutions and environment compared to other euro area small open economies, two major concerns warrant significant attention of our policymakers:

Reforms, including structural reforms, enacted from 2012 to-date have broadly failed to significantly alter the our socio-economic competitiveness compared to our core peers.
Posted by TrueEconomics at 9:40 AM