In the previous post (here), I looked at the annual data for US Mint gold coins sales. Here, let's take a quick look at the shorter-term, monthly trends and dynamics for December 2012.

Following a robust monthly rise in sales of coins by oz (weight) totals to 136,500 oz in November, December sales moderated to 76,000 oz (down 44.32% m/m), still posting a healthy 16.92% increase y/y. Compared to historical average of 56,346 oz the sales are still up, although December 2012 is below 87,717 oz average sales for the crisis period (since January 2008). However, while difference to historical (1987-2012) average is significant statistically, it is not significant relative to crisis period average. Furthermore, 6mo MA is at 68,250 which is well below the December sales levels.

The relative moderation in the number of coins sold compared to the trends in the volume of coinage gold sold (oz) can be explained by the increased oz content of average coin sold. In terms of oz/coin sold, December 2012 sales stood at 0.927, well ahead of 0.787 in November, posting the highest gold content reading for any month since December 2011. Historical average content is at 0.590 oz/coin and crisis period at 0.790 oz/coin, both statistically significantly lower than December 2012 figure. 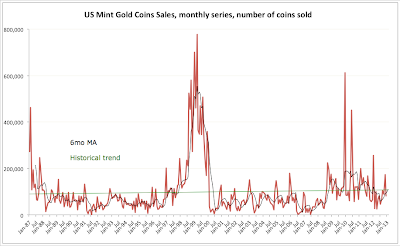 As above clearly shows, the historical trend is upward sloping and the current reading is comfortably at the trend levels both in terms of 6mo MA and actual level reading for December 2012. 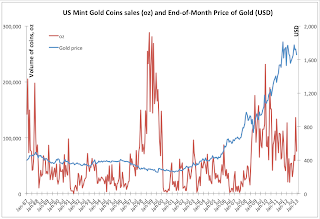 The chart above shows contemporaneous negative correlation in price of gold v volume of gold coins sales between September 2009 and April 2012, with exception of December 2010 - August 2010. This correlation has now been broken down and turned positive since April 2012 - a new sub-trend that remained consistent since then and was reinforced in December 2012 figures. Chart below illustrates this much more clearly: 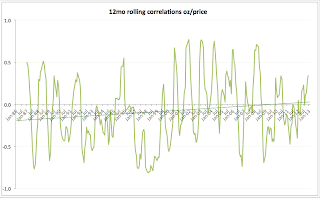 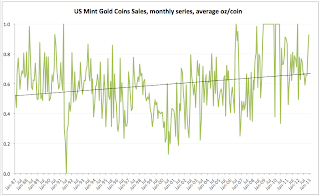 As mentioned above, December 2012 sales were characterised by a substantial increase in average gold weight of coins sold which is running well ahead of the historical (upward sloping) trend. More significantly, this year sales fell below the historic trend in 6 months out of 12. Hence, neither trend direction, nor current deviation from the trend are indicative of any severe downward demand pressures.

Overall, sales dynamics show that since February 2012, volumes of sales in oz have recovered nicely back to their historical trend (upward sloping) and are currently running above the January 2000-July 2008 averages. 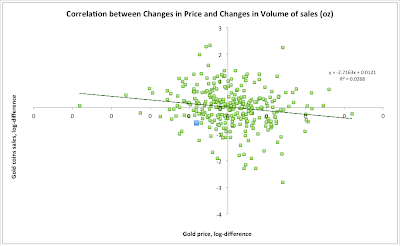 While December 2012 observation is to the downside of the trend, it is clear from the picture overall that changes in gold prices during a given month have statistically no discernable relation to the demand for gold via US Mint coins sales. This simply confirms the nature of fundamentals driving demand for coins as discussed in my previous posts on the issue (see previous post linked above for one such link).
Posted by TrueEconomics at 2:23 PM