On foot of the post on the US household incomes (see here), I took a look at CSO series for Ireland's per capita national income. Here's a chart: 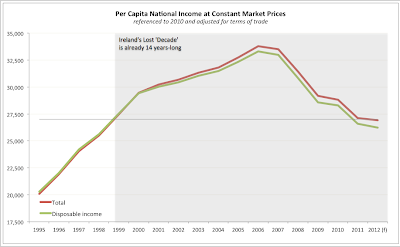 Using IMF projections for personal consumption and private investment for 2012, Ireland's 2012 per capita national income can be expected to remain below 1998-1999 averages in 2012.

Put in different terms, as the result of the current crisis, Ireland's real economy has already lost not a decade but over 14 years worth of growth. Assuming disposal incomes per capita grow at 2.5% per annum into perpetuity, Ireland will regain 2006 peak levels of real income per capita by 2022, at 2% by 2024 and at 1.75% - by 2026, implying that the 'lost decade' for Ireland's economy is likely to last not 10 years, but between 16 and 20 years.
Posted by TrueEconomics at 2:22 PM