CMA published Q4 2012 report on sovereign CDS markets and there are some interesting trends and stats highlighted. 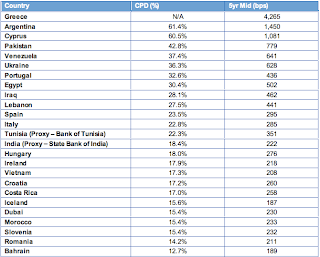 Note that Ireland is no longer in top 10 riskiest states. Good news. A bit more on this below.


Per CMA: "Global CDS prices ended the year on a strong note, tightening 16% overall as Europe rallies strongly and Greece repurchases debt allaying fears of an exit from the Euro. Only Argentina and Egypt widen significantly on the quarter."

"Argentina CDS ended a volatile quarter as the most risky sovereign reaching a high of 4832bps at the end of November on concerns over USA debt guarantees, but rallied to finish on 1450bps. CDS spreads in Spain tightened from 384bps to 295bps as spreads in Western Europe as a whole tightened 19%." 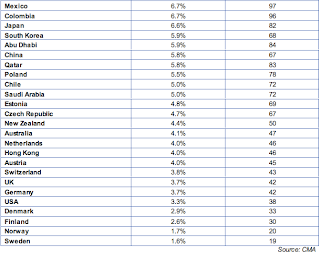 Note that only 3 euro afea states make it into top 10.

Per CMA:
"Sweden edged Norway off the top spot of the least risky table by 1bps, as the Scandinavian countries ended a strong quarter on the back of a good performance in Europe as a whole. The USA slipped two positions, as a solution to the “Fiscal Cliff” and debt ceiling concerns continue into year end. Austria and Netherlands enter the table with the spreads aligning with the strong economies of Germany and Switzerland." The latter rationale is most bizarre one I heard - the Netherlands are in a serious economic recession, deeper and longer than the rest of the euro area, so I have no idea what CMA are talking about.

Now, some interesting charts relating to Western Europe. Per CMA: "Western Europe continued on the rally from Q3 into Q4, with spreads tightening 19% overall and Greece looking more likely to stay in the Euro. Spreads in Portugal creeped over the 600bps level mid-November but ended the year at 436bps, 13%  tighter. Ireland tightened 31% closing the year at 218bps as the turnaround story continues. Spain and Italy, seen as the key economies in southern Europe, tightened 23% and 19% respectively."

Recall that European CDS overall tightened 19% in Q4 2012 and overall global momentum was very strongly on tightening side. 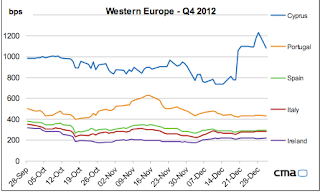 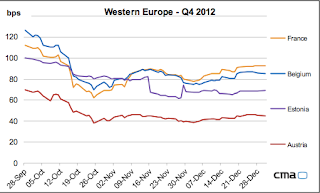 Note that Ireland experienced comparable (in levels) declines in CDS to all other peripheral countries excluding Cyprus (which saw an increase) and Portugal (where declines were more pronounced, when considered relative to peak reached in the Quarter. It is hard to tell - in this environment - whether Irish performance is driven by own fundamentals or by a combination of these said fundamentals and overall improved investor tolerance for risk.

In terms of percentages declines, we did perform stronger than other peripherals (ex-Portugal) and the Western Europe as a whole.

However, it is still too early to claim that Ireland - based on CDS valuations - is not a part of the 'peripheral' euro area group. Hopefully, more progress in near future will get us decoupled from this camp.
Posted by TrueEconomics at 12:15 PM

Why no data for Canada ?