Back in December, there was quite a bit of controversy stirred around by a short note about the failures of the so-called Icelandic model for dealing with the crisis. The note - a blogpost (and I have no link to it right now) - was alleging that much of the reforms in Iceland were not voluntarily chosen by the Government (which is true), did not result in significant debt relief for homeowners (due to mortgages markets structure differences) and did not produce significant improvements in the economy.

At the time, some readers of the note in Ireland went on to accuse myself of 'talking up' Iceland to promote my 'personal agenda'.

Aside from the above accusations being complete and unadulterated bulls**t (I never said Iceland did everything right or that all of Iceland's policies should be adopted in Ireland), they were based on the reading of one blog post.

Not to stir up any controversy, here's a link to the Danske Bank note on Iceland's economy from December 2012. I am not going to make any judgements here - just read the note. I am reproducing few charts below for those unwilling to read through the entire report.

"The recovery of the Icelandic economy has been challenged by the deteriorating conditions in the European trading partners, which account for a large share of the Icelandic exports. It looks like growth in Iceland will perform above most of Europe over the next few years and that its recovery will continue but the level is still well below the pre-crisis level. We expect growth rates of 2.5% y/y in 2012 and 2.2% in 2013. It is also worth noting that recent national account revisions showed that growth in 2011 was adjusted down.

While investment activity and inventories have been rather volatile recently, private consumption has held up relatively well and 2012 should show about 3.8% y/y growth. We expect it will slow somewhat in the following years, to a growth level just below 3%. Investment activity should be fairly solid too and we expect growth rates of about 8-9 % y/y in 2012 and 2013, perhaps with a slightly increasing trend.

Inflation remains above the central bank’s 2.5% target, and has been so for a while, but inflationary pressures have eased somewhat in 2012 and we expect this trend to continue. Our forecast for the GDP deflator is currently 3.7% y/y in 2012 and 3.1% in 2013.

As the economy has been undergoing recovery, the labour market has improved significantly too. While we do not see this trend ending, we do expect it to slow gradually  as the unemployment rate comes down. Consequently, our year-end unemployment rate forecast is 5.8% for 2012, falling to 5.3% in 2013"

Here you go: Iceland's U-shaped recovery and Danske's forecasts for 2013-on: 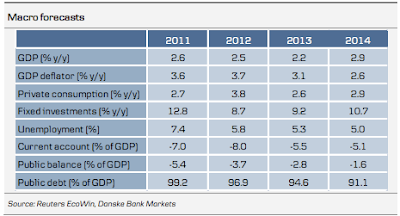 And for the commentariate loving to accuse me of just dropping numbers to 'fool the readers' - I am not giving a commentary on the above precisely because you accuse me too often of commenting.
Posted by TrueEconomics at 1:39 PM

Am sure you pay as much attention to the commentariate as many of the rest of us do. As you've come to discover in this country, if you're not willing to pull on that green jersey, they'll portray you as having some other 'agenda'

Did not read, but the pressure is piling up. The Nippon Govt seem to have gotten very arrogant since that unfortunate business in 1904.

The Rentiers rule Ireland, that suits those who want the strategic threat to England minimized.

Iceland for better or worse is a distinct economic hinterland trading with other areas for goods and services.
i.e it remains a real country (for the moment)
Greece like the rest of us in Euroland is bailing out under water global wage / energy arbitrage banks.

The euro market state is a failure for most.