So with US elections over and status quo confirmed as the preferred option by the American voters, it's time to look at the 'fiscal cliff'. Not my favourite reading at night, but... here are some factoids and opinions: 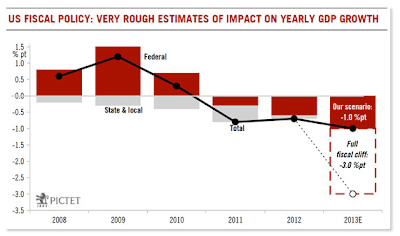 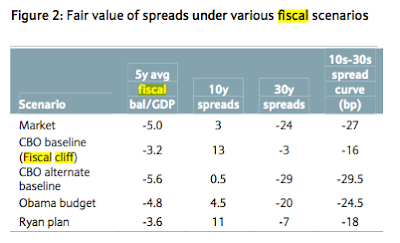 Their analysis prior to the elections:
"The Congressional Budget Office has noted9 that if the fiscal cliff hits, ie, the stipulations under the current law are not changed or pushed forward (referred to as a “punt”), the fiscal tightening could lead to economic conditions in 2013 that would probably be considered a recession, with real GDP declining 0.5%, a 2.5-2.7% swing from 2012 GDP. This scenario is not our base case; we see 2012 and 2013 GDP at roughly 2.2% and 2%, respectively, as we expect new legislation to address broader fiscal concerns in the context of near-term stability. That being said, we believe the chances of going of the fiscal cliff temporarily are higher if President Obama is elected ...This supports the view that near-term risk-off (ie, breakeven steepener) sentiment is more likely in a Democratic win. In any case, the ultimate outcomes under both administrations are likely to be similar."

And: "The final question relates to the approach each administration would take to put the US on a sustainable medium term fiscal path. Here again, there are two very different plans. That passed by the Republican House focuses heavily on spending cuts ($6trn vs. the CBO alternative scenario), while the president’s plan relies more on revenue increases. The House plan pushes debt/GDP down to 62% by 2022 but implies heavier fiscal tightening than the president’s budget, which takes debt/GDP to 76%".

Note that the US is likely to face much steeper impact of the fiscal cliff than other countries: 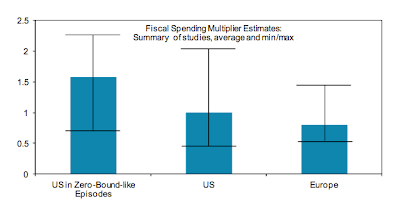 JP Morgan:
" Overall, we now see cliff-related fis- cal issues subtracting about 1%-pt from growth next year, up from our prior assessment of 0.5%-pt. The table ... summarizes our expectations regarding fiscal cliff outcomes. ...There are other important non-cliff fiscal issues, such as declining defense spending, which are not the topic of this note. (We estimate these non-cliff fiscal measures have subtracted about 1%-pt from growth relative to trend over the past year, and will sub- tract a similar amount in the coming year.)"

In contrast, here's the IMF view: "On the fiscal cliff in the United States, we believe that it must be avoided. It would entail a tightening of fiscal policy of roughly 4 percent of GDP and would plunge the American economy back into recession, with deleterious consequences for the rest of the world. You mentioned that fiscal adjustment has to happen in the U.S. to avoid a downgrade. Indeed, what we are advocating is a fiscal withdrawal, an adjustment of about 1 1/4 percent of GDP, which would entail that a number of the so-called Bush tax cuts could be prolonged, and that other measures that have helped support the economy can be prolonged too. But in the end, there would still be an adjustment, a reduction in cyclically adjusted terms of the fiscal deficit of 1 1/4 percent of GDP, and this puts the U.S. economy on track toward better public finances. What is much more important in all of this is that in the end there is a medium-term plan that is being developed that explains very clearly how the deficit is then brought down further over the next five years, and beyond, from the still high level that it would have next year."

Which is consistent with the IMF earlier Article IV assessment: "Ongoing political gridlock could block an agreement on near-term tax and spending policies. If all temporary tax provisions were to expire and the automatic spending cuts to take effect, the 2013 fiscal contraction would be very sizable
(over 4 percent of GDP). This “fiscal cliff” would reduce annual growth to around zero, and the economy would contract in early 2013. Even if the “fiscal cliff” were quickly unwound, the damage to the economy could be substantial, especially if consumers and businesses were faced with continued uncertainty about tax and spending policies. These strong negative growth effects would in part reflect the limited effectiveness of monetary policy at the zero interest rate bound. Some anticipatory effects from the cliff could be felt already in late 2012, with spending held back by policy uncertainty—subtracting perhaps ½ percent from (annualized) growth in the second half of 2012 according to the Congressional Budget Office (CBO)." 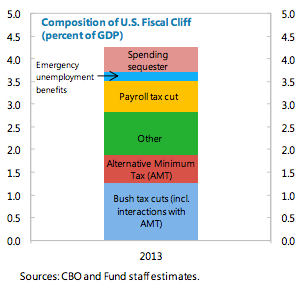 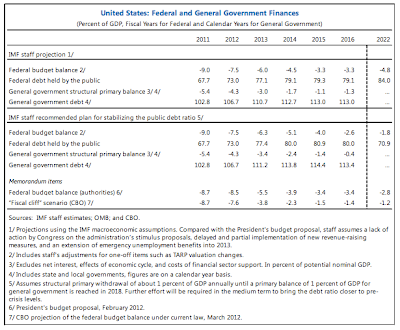 Posted by TrueEconomics at 7:05 PM