A new paper "Home Equity in Retirement" by Makoto Nakajima and Irina A. Telyukova (September 20, 2012) looks at the effects of homeownership on savings/dissaving by retirees, using the US data for 1996-2006.

Using an estimated structural model of saving and housing decisions, the study finds that "homeowners dissave slowly because they prefer to stay in their house as long as possible, but cannot easily borrow against it. Second, the 1996-2006 housing boom significantly increased homeowners' assets. These channels are quantitatively significant; without considering homeownership, retirees' savings are 24-43% lower."

Figure 1 shows over the period 1996-2006, median net wealth remains high very late into the life cycle. The observation that many people die with significant savings, which is puzzling in the context of a simple life-cycle model, has been termed the \retirement saving puzzle. However, the picture changes dramatically if we consider the saving behavior of retirees who
own homes, compared to those who do not. Consider figure 2, which documents the cohort profiles of median net worth over the same period, normalized by the first observation, for homeowners versus renters. 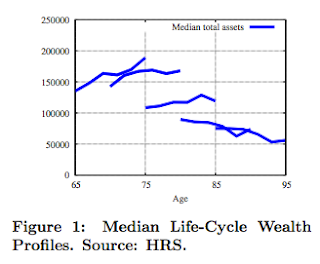 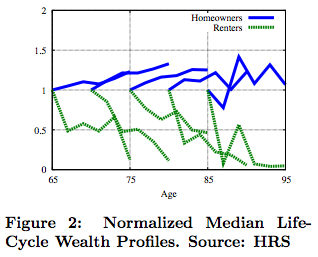 The difference is stark. Homeowners have flat or increasing profiles of net wealth over this period, while renters display a far faster rate of asset decumulation. This suggests that housing may play a major role in determining how retirees save or dissave."

Overall, the paper finds that:


All of this has huge implications for countries like Spain and Ireland that have undergone a massive property prices bust. Declines in property prices have wealth effects, negative equity has wealth effects. Both, however, have also direct behavioural effects that are also adverse, as outlined above. In my view, we have not even started to count the real costs of the property busts in our fiscal and economic forecasts.

Posted by TrueEconomics at 2:42 PM

Homeowners plan to have paid their mortgage off at least by the time they retire.

Any reduction in income by homeowners on retirement is offset by saving on mortgage/loan repayments; the value of the property is largely irrelevant in terms day-to-day living costs.

Renters on the other hand face a relative increase in outgoings in retirement with a reduced income and static/rising rent.