In the previous post, looking at the top-line figures for Industrial Production for Ireland, I have promised to look more closely at the dynamics underlying the largest singular exports (goods) driver - the Pharma sector - Basic Pharmaceutical Products and Preparations (BPP&P) sector. Here are some numbers and trends.

An excellent analysis of this is also available from Chris Van Egeraat of NUI Maynooth (link here).

Let's start from the top. Throughout, I use the current figures for September that are subject to potential future revisions. 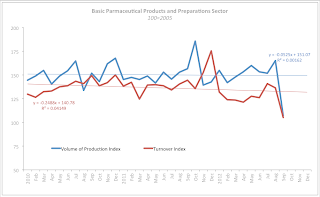 There is clearly a steep drop off in both series. And this falloff has a significant impact on our exports and overall industrial sectors activity.

Nonetheless, the drops in September amounted to 4.6 STDEV in Volume and 2.66 STDEV in Value - both are sizable.

A comparable drop in Volume in November 2011 came in at:
Thus, one has to be cautious when attributing the index moves in September 2012 to either volatility or the specific long-term trend change, such as a patent cliff (again, the note linked above from Chris Van Egeraat is spot on in this point).

However, one must be cognizant of the signifiant positive links between activity in the BPP&P sector and overall Manufacturing activity. Chart below illustrates the strength of that relationship: 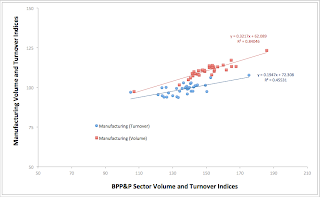 One has to be also significantly concerned with the fact that we have coincident drops in Turnover and Volume, so the price effects seem to be going the same direction as the volume of activity. In general, there is virtually no meaningful relationship between sector volume and turnover. Strengthening of the link between turnover and volume can be reflective of a structural slide in the overall activity. 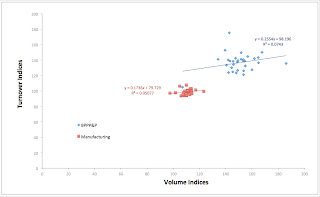 As usual, caution is warranted in interpreting the immediate and provisional figures. However, 'slips' like this do matter - both in terms of their immediate impact on GDP and (less so) GNP, and in the light of what we do anticipate - the reduction in overall sector activity in the near future due to patent cliff.

Posted by TrueEconomics at 7:43 PM