Here comes the second post on OECD Internet Economy Outlook 2012 report (first in the series was here), focusing on Ireland and the mythology of our 'global ICT services hub'.

So wading deeper into the OECD report, take a look at this chart: 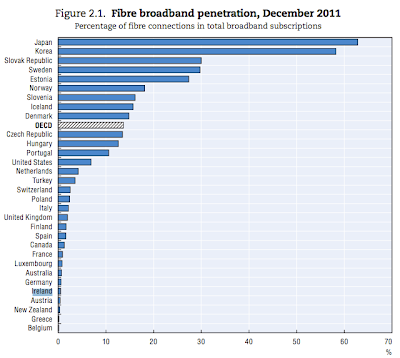 Ireland hardly can boast of an advanced fibre infrastructure that would be consistent with real ICT economy, especially ICT services economy. Per OECD: "Fibre-based broadband connections offer the fastest data transfers..." Now, in many countries, deployment of fibre broadband is lower due to home ownership rates being lower (people tend to invest less in a fixed connection quality when they rent, other things held constant). In Ireland, abysmally low fibre coverage is coincident with very high home ownership rates.

Next up, given lack of fibre coverage, you'd think we should lead the world in overall penetration of the substitutes (e.g. wireless), although, of course, fixed fibre and wireless can be complementary to each other (e.g. fixed line at home, mobile on the go). Alas, not really: 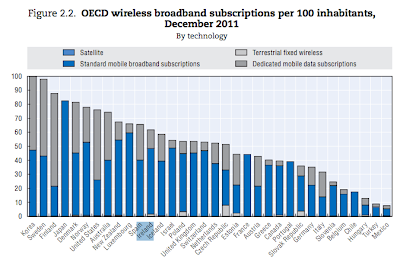 And subsequently, the gap between broadband connections and overall internet connections in Ireland is high by comparative standards: 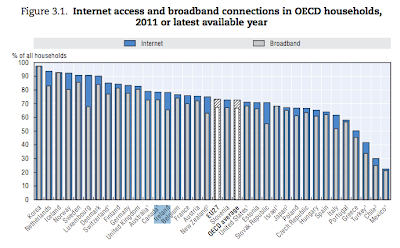 In fact, we are below both EU27 and OECD average on broadband coverage per above chart.

Next up: the world of data is becoming portable. And in particular it is becoming portably mobile - in other words, more and more access to data is now taking place via mobile devices, rather than portable computers... And in Ireland? 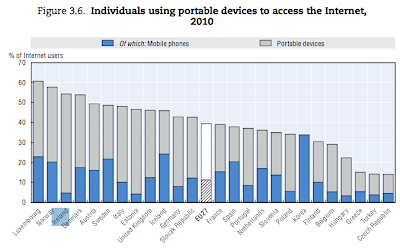 Despite all the talk about the new generation of mobile users, etc, Irish 'younger and more educated workforce' seems to be not using mobile devices. 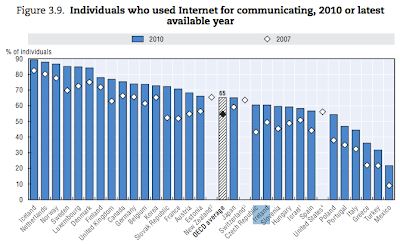 In fact, per OECD data, we have fewer internet users engaging in social networking than Greece, Portugal, Poland, Slovakia and Hungary (overall, we rank 12th in the group of 24 countries in terms of this parameter).

And we are not exactly content-creative either: 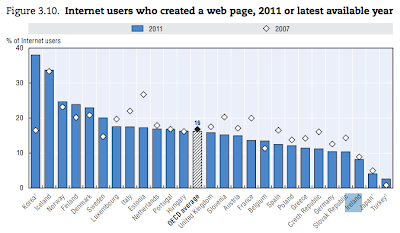 E-commerce is absolutely average in its reach in Ireland too and is growing relatively slowly: 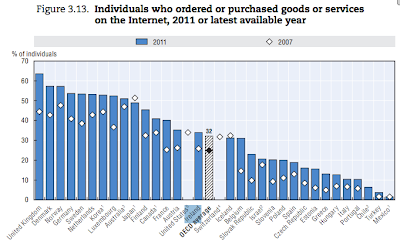 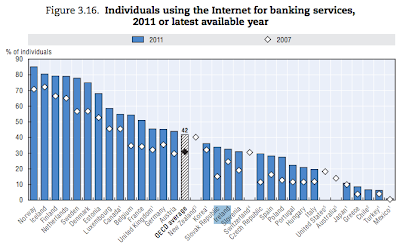 As is internet-based learning: Do note that e-learning is associated strongly with continued or life-long education, so the above suggests we tend not to upskill much via continued education once we get our degrees. Not exactly a badge of honour.