Merrill Lynch calling the turn from the Age of Deleveraging to the Age of Great Rotation: "History shows that the beginning of every great bull market in equities (1920s, 1950s, and 1980s) has coincided with a major inflection point in the trend of long-term bond yields (see Chart 3)." 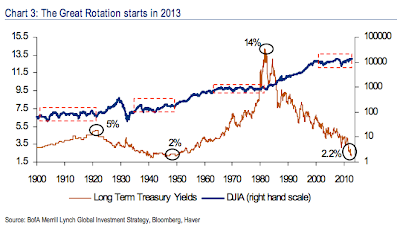 "If in 2013 jobs and credit validate Bernanke’s success in his “War against Deflation,” an era of rotation out of fixed income and into equities could begin."

That's a load of 'ifs' and 'cans'. In reality, there will be such a shift at some point in time. Only question is the following one: will the Age of Deleveraging (not called 'Great Deleveraging' by the ML, note) going to be so short-lived that by the end of 2013 Ben's cash printing will be sufficient to drive down real economic debt in the US down significantly enough to generate a new upswing in consumer credit (after all, there will be no US growth absent credit growth).

ML are pretty darn optimistic on this:
"The strong performance of US real estate, bank stocks, and distressed European assets this year suggests to us that a stealth rotation has actually begun. The fiscal cliff may temporarily derail the journey, but in our view the destination remains a favorable one for financial assets. Our core asset allocation is bullish equities and credit, bearish bonds and neutral commodities."

ML own view is a bit dented by the evidence in the chart above on the 1920s-1930s markets transitions relative to Treasury yields... Of course, as today, the 1920s-1930s period is precisely characterized by a long-term Great Deleveraging dynamics. Denying that the current state of the economy is characterized by potentially the same forces is a bit reminiscent of the Greenspan's 'over-exuberance' view.

Link to the ML research note: here.
Posted by TrueEconomics at 12:13 PM

Email ThisBlogThis!Share to TwitterShare to FacebookShare to Pinterest
Labels: Age of delveraging, Great Rotation, US economy