And a bit more on indices dynamics:


Some interesting longer term trends from the major indices and VIX revealing the underlying structure of the Irish and the euro area crises. Note: data covers period through September 2012. 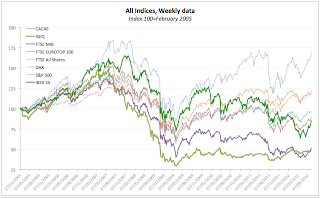 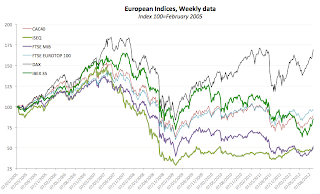 Clearly, Ireland is the poorest performer in the class.

Now, it is worth noting that Ireland's stock market is also 'distinguished' by a very 'special' characteristic of being the riskiest of all markets compared, with STDev of returns at 36.45 (on normalized index). Compared to the French market (STDev=22.34 for the period from the start of 2005 through today), Italian market (STDev = 28.95), FTSE Eurotop 100 (STDev = 18.90), FTSE All Shares (STDev = 13.70), German DAX (STDev = 23.05), S&P500 (STDev =14.55) and Spanish market (IBEX STDev = 23.70), Ireland is a risky gamble. Given that the direction of this bet, in the case of Ireland has been down from May 2007, virtually uninterrupted, the proposition of 'patriotic investment' in Ireland's stocks is an extremely risky gamble.

Normalizing the indices at their peak values (set peak at 100), chart below clearly shows the constant, persistent underperformance of the ISEQ. 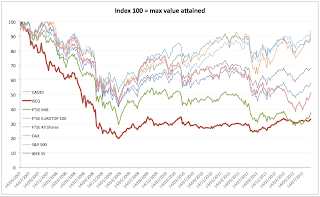 Now, let's take a look at the core driver of global fundamentals: risk aversion as reflected in VIX index. In general, rising VIX signals rising risk aversion and should be associated with falling stock valuations. Once again, for comparative reasons, we use indexed series of weekly returns for 1999-September 2012. Up until the crisis, Irish stock prices behaved broadly in line with the same relationship to VIX that holds for all other major indices. Chart below illustrates this for FTSE Eurotop 100, but the same holds for other major indices. VIX up, risk-aversion up, stock indices, including ISEQ, down. 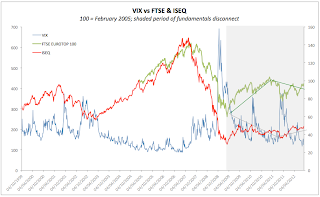 Around Q1 2009 something changed. ISEQ lost any connection with 'reality' of the global markets and acquired life of its own. Or rather - a zombie life of it own. No matter what the global appetite for risk was doing, Irish stocks did not have much of a link with global investment fundamentals.

Another interesting point of the above chart is that Lehman Brothers were not a trigger for Irish crisis (as many of us have been saying for ages, despite the Government's continued assertions to the contrary). Irish market peaked in the week of May 21st, 2007, Lehman Brothers folded on September 15th, 2008, with most of the impact in terms of our indices occurring at September 15th-October 6, 2008, some 16 months after Irish markets began crashing. Prior to Lehman Brothers bankruptcy, ISEQ dropped from a peak of 147.3 to 61.6, while following the Lehman Brothers and until the global stock market trough of March 2, 2009, ISEQ fell to roughly 31.9 reading. So even in theory, Lehman bankruptcy could have accounted for no more than 29.7 point drop on the normalized ISEQ, while pre-Lehman drivers collapsed ISEQ by 85.7 points.

More revealingly, ISEQ steep sell-offs through out the entire crisis have led, not followed, sell-offs in major indices. In other words, if Lehman caused the global market meltdown, then ISEQ 'caused' Lehman bankruptcy. Which, of course, is absurd.

There are many other stories that can be told looking at the Irish Stock Exchange performance, especially once higher moments to returns distribution are factored in, but I shall leave it to MSc students to explore.
Posted by TrueEconomics at 5:21 PM