Here's an interesting little factoid. The theory - usually advanced by the Irish Government - goes that Lehman Brothers bankruptcy has been a major driver of the Irish crisis. I have disputed this for ages now and more and more evidence turns up contrary to that when more and more data is considered.

Suppose Lehman Bros did contribute significantly to the Irish crisis gravity. In that case, given Lehman Brothers bankruptcy contributed adversely to the global markets, we can expect a dramatic contagion from the global markets panic to Irish markets. One way to gauge this is to look at the changes in correlations between the measure of overall 'panic' in the international markets and the behaviour of the returns to Irish stock market indices.

Let's take ISEQ index for Irish markets and VIX for a measure of the panic sentiment in the global markets. Let's take weekly returns in ISEQ and correlate them to weekly changes in VIX. I use log-differencing in that exercise and 52 weeks rolling correlations.

What should we expect to see? If the 'Lehmans caused Irish crisis or worsened it' theory holds, we should expect correlation between ISEQ weekly returns and changes in weekly VIX readings to be negative (VIX rising during the crisis signals rising risk aversion in the markets). For Irish markets to be influenced significantly, or differently from other markets around the world, such negative correlations should be larger in absolute value than for other countries.

What do we see? Here is a table of averages:

Contrary to the hypothesis of 'Lehmans caused Irish crisis', we see that throughout the period of the crisis, ISEQ suffered shallower, not deeper, spillover from global risk aversion to equity valuations, save for Spanish IBEX index. In other words, evidence suggests that Irish 'disease', like Spanish 'disease' was driven more by idiosyncratic - own market-specific - factors rather than by global panic.

Here's the chart, showing just how consistently closer to zero ISEQ correlation to VIX was during the post-Lehman panic period: 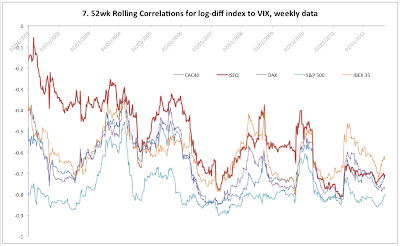 And here is a chart showing skew in the distribution of weekly returns which shows that during the crisis, Ireland's ISEQ suffered less from global markets 'bad news' spillovers (at the point of immediate global markets panics, such as Lehmans episode), but exhibited  a much worse negative skew than other peers in the period from June 2010 through Q1 2012. 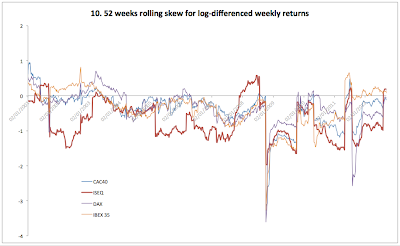