This is the fourth note on the OECD Internet economy report 2012 (part 1, part 2 and part 3 are linked here).

We hear much about the vast gap between Dublin and the rest of the country in digital economy. Usually this refers to the disparity of access. Yet, as the following illustrates, even the 'advantaged' Dublin scores poorly compared to its peers (other capital regionas) in the OECD: 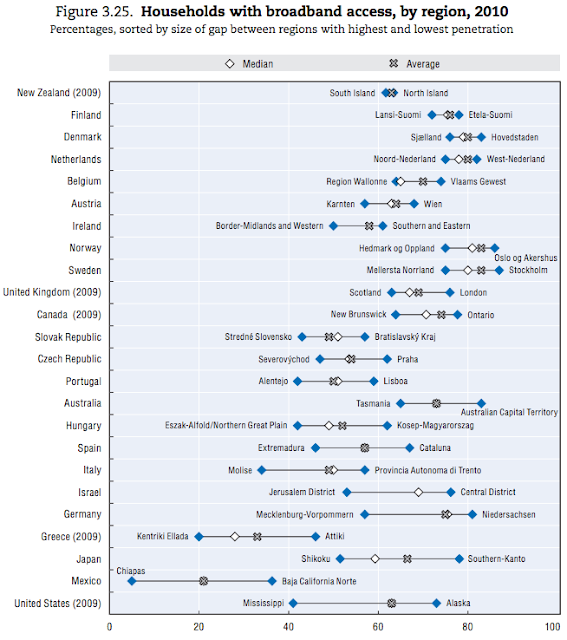 For example, Dublin and Southern and Eastern region are worse than Scotland - the lowest scoring region in the UK. Too bad the folks at the WebSummit and other prime events in digital economy world converging onto Dublin have no clue just how poor we really are in terms of enabling and deploying ICT services-based economy. May be some of them will read these posts or the OECD document before they start extolling the virtues of Irish 'digital' economy.

But enough about the households. What about pioneering, innovative, R&D intensive, knowledge economy business environment here? After all, as I said earlier, ireland is home to so many MNCs in the sector and so one should expect business use of the web to be high...

Oops.. I thought we have hugely innovative start ups and MNCs popping up on every corner... After all, IDA and EI brochures are full of their smiling faces and sunny stories.

And usage is, as with schools, vastly lower than access:

Now, unimpressive record on the share of employees connected to the web and using it... 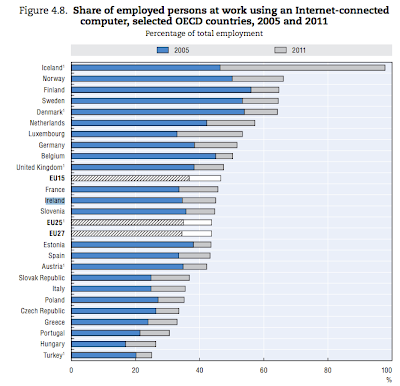 Equally interesting fact revealed by the above chart is that there is no impressive growth in this metric in 2005-2011 period, despite the fact that overall share should have risen dramatically due to obliteration of jobs in less computer- and web-enabled sectors such as basic consumer services and construction. In other words, the above chart shows conclusively that Irish economy is not becoming more knowledge-intensive even after jobs destruction wave sweeping traditional sectors.

The same ic confirmed by a different metric: 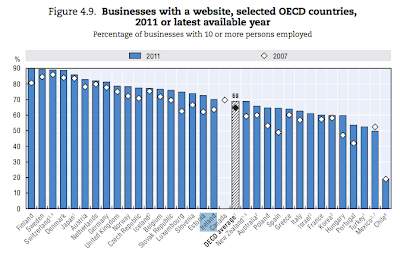 Remember the malarky about MNCs operations in Ireland being of great benefit to 'clustering' and 'spill-over of skills and know-how' to the broader economy? Why, it seems to be pretty much a lie too: 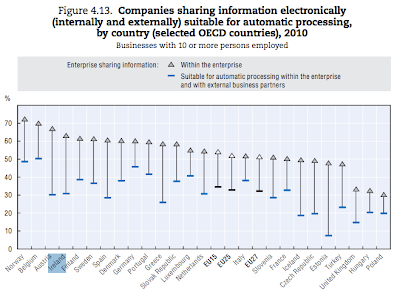 Per chart above, Ireland scores relatively well on internally shared systems and rather poorly on externally shared ones. In other words, if MNCs are creating knowledge and transfers here, they are more likely to keep them to themselves than to allow them to 'spill-over' to outside their own offices.

Ireland-based businesses are not even any good at invoicing via the web: 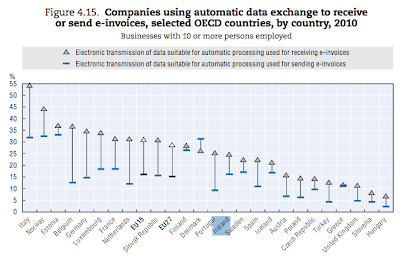 Of course, the headline figures on earnings generated via e-commerce are high, but these are grossly skewed by MNCs (e.g. google et al): 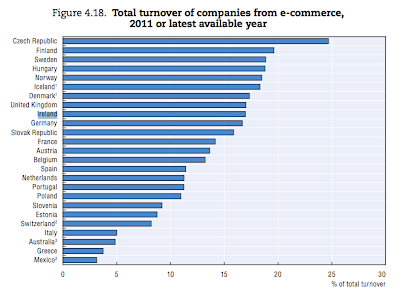 How I know that? Because the actual usage of e-based sales is poor in Ireland: 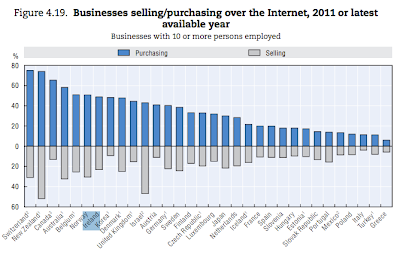 So revenue generation ranking above is skewed heavily by few businesses carrying out huge transactions volumes, not by broad reach of e-commerce.

And the same applies to ICT business spending on R&D: 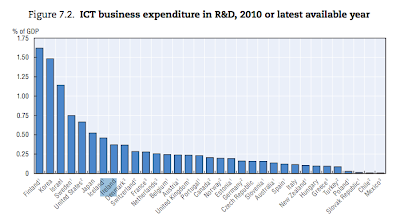 Once again, more on the topic in the next post.
Posted by TrueEconomics at 9:42 PM