There's been some debate recently as to the size and importance of EU subsidies to Ireland and the EU budgetary allocation in the context of Irish economic growth. Here are the facts.

First up, the summary of EU subsidies, contributions and net subsidies: 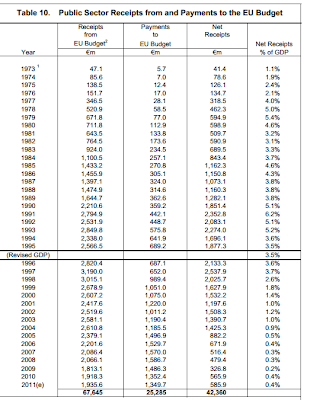 Next, using the IMF WEO database, the netting of the EU Net Receipts out of of our GDP and GDP per capita: 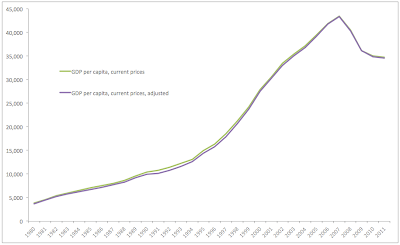 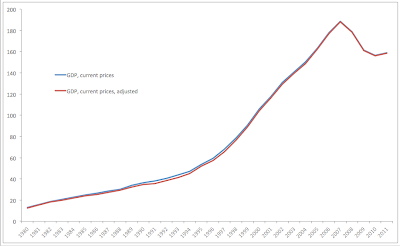 Factoring in the net receipts into growth equation: 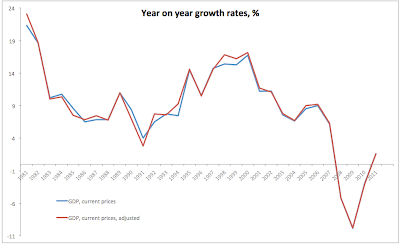 The above clearly shows that lower volatility in receipts has contributed to smoothing of the GDP growth rates in most periods, but exacerbated 1991 and 2001-2002 slowdowns. EU net receipts also helped fuel (not significantly, though) 2004-2006 bubble and failed to provide any support for the economy in 2008-2010 collapse.

The reason for small effect of supports in recent years is very clear from the charts below: 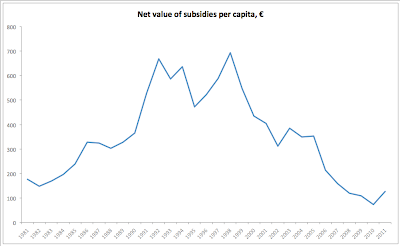 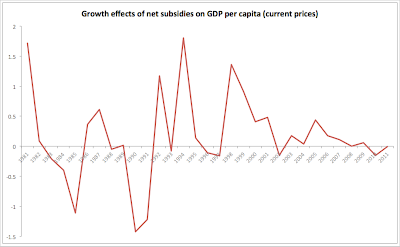 However, the most dramatic effect the subsidies had was registered on the side of our external balance. Recall that international 'experts' love the idea of Irish Current Account surpluses as the driver for sustainability of our debt. Herein, however, rests the problem: 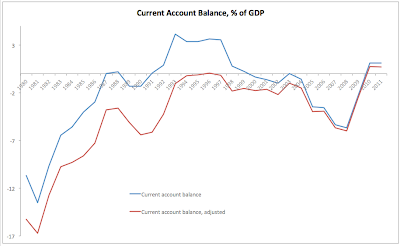 The logic of 'experts' arguments is that Ireland can sustain current levels of Government debt because we have potential to generate current account surpluses vis-a-vis the rest of the world. And their evidence of that rests on their reading of past (1991-1999) current account positions. Alas, once we net out net transfers from EU from these... the picture changes. In the entire pre-2010 history, Ireland generated current account surplus (net of EU subsidies) in only one year, namely 1996. When one realises that debt sustainability for Ireland requires current account surpluses to be in excess of 3% on average over the next 10-15 years, one has to be slightly concerned by the prospect (as 2014-on suggests under the current EU Budget proposals) that Ireland will no longer be a net recipient of EU subsidies. Here's what happens were Ireland to become net contributor to the EU budget in 2014-on at a rate of 1/2 of 2009-2011 annual subsidy received. Our average annual CA surplus (per IMF projections for 2013-2017) should run at 3.585% of GDP, but factoring in EU potential budgetary changes it is likely to run at 2.825% of GDP. And since the path of the CA surpluses is expected to decline (as IMF projects) in 2016-2017, then it is unlikely that the CA surpluses will be in excess of 3% over the period through 2022. So what about that 'sustainability' of Irish debt levels, then?

Posted by TrueEconomics at 2:28 PM

These days, everything is relative? I am far more concerned about the IFSC? The shadow banking laundering mess to which it plays host will all unwind, losing jobs rents etc. Not to mention the ill-will the failures will generate at the worst possible time ...

The EU approved the SSIA scheme in the late 1990s. Why, given that it amounted to a large direct subsidy to banking?