A very interesting paper on the effects of the financial crises on imbalance of power (and thus the imbalance of the incidence of costs) between the borrowers and the lenders. The paper is a serious reality check for Irish policymakers in the context of the 'reforms' of the Personal Insolvency laws currently being proposed. In fact, the Irish proposed 'reforms' actually tragically replicate the very worst implications of the study summarized below.

"Resolving Debt Overhang: Political Constraints in the Aftermath of Financial Crises" by Atif R. Mian, Amir Sufi, and Francesco Trebbi (NBER Working Paper No. 17831, February 2012 http://www.nber.org/papers/w17831) shows that "debtors bear the brunt of a decline in asset prices associated with financial crises and policies aimed at partial debt relief may be warranted to boost growth in the midst of crises. Drawing on the US experience during the Great Recession of 2008-09 and historical evidence in a large panel of countries, [the study explores] why the political system may fail to deliver such policies. [The authors] find that during the Great Recession creditors were able to use the political system more effectively to protect their interests through bailouts. More generally we show that politically countries become more polarized and fractionalized following financial crises. This results in legislative stalemate, making it less likely that crises lead to meaningful macroeconomic reforms."

Mortgage recourse:
"The higher level of recourse and tougher rules for declaring bankruptcy are likely to prevent borrowers from declaring default. As a result, debtors in European countries are more likely to absorb financial shocks internally than declare default. …We investigate this …by comparing the change in default rates across Europe and the United States during the 2007 to 2009 global housing crisis. Since the bankruptcy regime is relatively more lax in the United States, one would expect a larger increase in default rates." Controlling for rates of decline in house prices and the level of indebtedness of the borrowing households (LTVs at origination) the authors test explicitly data for US, U.K., Spain, France and Ireland from 2007 to 2009 using data from the European Mortgage Federation. 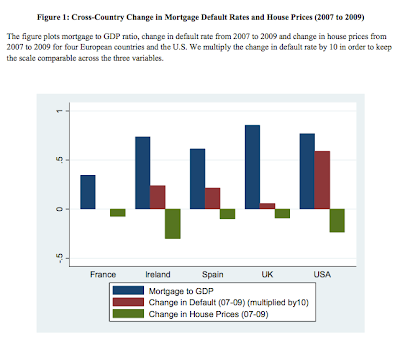 "The change in default rate (red bar) for USA between 2007 and 2009 is 5.9 percentage points. While the default rate level in 2007 is not shown in Figure 1, it is quite low and similar across the five countries (0.4%, 1.2%, 0.7%, 1.9%, and 2.1% for France, Ireland, Spain, the United Kingdom and the United States, respectively). …All European countries in Figure 1 have high recourse and tough bankruptcy laws relative to the United States. The very large increase in default rates for the US is consistent with the notion that lower level of recourse and easier bankruptcy legislation helps indebted borrowers declare default. …A collective look at the three housing market variables in Figure 1 shows that the United States experienced the highest increase in default rates by far, despite some of the European countries experiencing very similar (if not stronger) decline in house price (e.g. Ireland) and having similar housing leverage (Ireland and the United Kingdom)."

The Political Response to Financial Crises and Debt Overhang:
"The 2007-2009 US financial crisis provides an interesting case study to examine the political tug of war between debtors and creditors. …[In the US], housing assets were the main asset for low net worth individuals, and their housing positions were quite levered. As a result, the collapse in house prices disproportionately affected low net worth individuals. Mian, Rao, and Sufi (2011) show that at the 10th percentile of the county-level house price distribution, house prices dropped by 40 to 60% depending on the house price index used. This decline would completely wipe out the entire net worth of the median household in lowest quintile of the net worth distribution. CoreLogic reports that 25% of mortgages are underwater; for the low net worth individuals in the US, this effectively means that their total net worth is negative."

"It is in this context that Mian, Sufi and Trebbi (2010a), henceforth MST, document the political economy of two major bailout bills that were passed in the US Congress in 2008. The first of these bills, the American Housing Rescue and Foreclosure Prevention Act (AHRFPA), provided up to $300 billion in Federal Housing Administration insurance for renegotiated mortgages, which translated into using public funds to provide debtor relief… At the same time, creditors--i.e., the shareholders and debt-holders of large financial institutions--pushed a second bill which was closely tied to protecting their own interests [the $700 billion Emergency Economic Stabilization Act (EESA) which eventually led to TARP]…"

"While both debtors and creditors were effective in passing legislation in their favor, there were two important differences in the magnitude of their effectiveness. First, the debtor friendly bill provided fewer resources ($300 billion versus $700 billion) than the creditor friendly legislation… [despite the fact that] debtors faced substantially larger losses …than creditors in the face of the US housing crisis. Second, while the creditor friendly EESA bill was fully implemented and executed, the housing legislation was a miserable failure. As of December 2008, there were only 312 applications for relief under the program and the secretary of Housing and Urban Development was highly critical of the program. … When Obama Administration …implemented the Home Affordability Modification Program under AHRFPA, their initial goal was to help 3 to 4 million homeowners with loan modifications. In July, 2011 President Obama admitted that HAMP program has “probably been the area that's been most stubborn to us trying to solve the problem.”"

"It is worth noting that one of the main reasons for the ineffectiveness of the HAMP program has been the lack of cooperation from creditors. The initial legislation made creditor cooperation completely voluntary, thereby enabling many creditors to opt out of the program despite qualifying borrowers. In fact, as Representative Barney Frank noted, banks actually helped formulate the program in the summer of 2008."

Need I remind you that in Ireland's reform bill to alter the draconian personal insolvency laws currently on the books, the banks not only have an option of voluntary participation, but an actual veto on resolution mechanism deployed.

"Cross-country evidence on financial crises and change in creditor rights The seminal work of La Porta et al (1998), followed by Djankov et al. (2007), introduced cross-country index of “creditor rights” from 1978 to 2002. The index captures the rights of secured lenders under a country’s legal system. A country has stronger creditor rights if:

"Overall, while creditor rights promote the origination of more credit, a financial crisis that results from excessive debt tends to reduce creditor rights. These results highlight a fundamental tension between the benefits of stronger creditor rights ex-ante and the debt overhang costs associated with giving creditor too much power in the financial crisis state of the world. Ex-post relaxation of creditor rights is not the norm after a financial crisis. …More specifically, we show that financial crises are systematically followed by political polarization and that this may result in gridlock and anemic reform. …Financial crises polarize debtors and creditors in society. On the one hand, debtors are weakened by a fall in the value of assets they hold. On the other hand, creditors become more sensitive to write-offs during bad times …and possibly more reluctant to converge onto a renegotiated platform because of their increased reliance on the satisfaction of the original terms of agreement."