Some very interesting stats on the Euro Area (comparatives) banking sector from the recent (October 4) research note from the Goldman Sachs (link here). Here are some bits:

In a recent (October 4) presentation to retail investors in Cork I was speaking about the mismatch in non-financial corporations funding sources between the US and Euro Area. My conclusion was that in the medium term (2013-2015) Euro Area corporates will be forced to increase issuance of corporate bonds since their preferred source of funding - banks lending - is going to stay subdued on supply side, while the equity issuance cannot absorb simultaneous deleveraging of the banking sector, and demand for increased equity from the corporate sector, especially as Governments across the EU are going into 'tax-em-to-hell' mode when it comes to potential investors.


Here are two charts from GS note on the same: 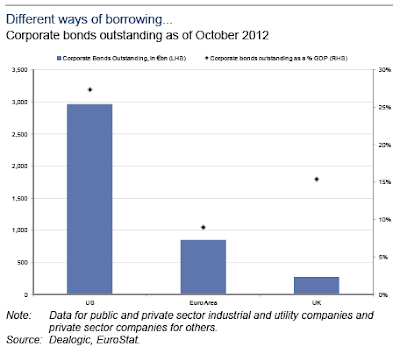 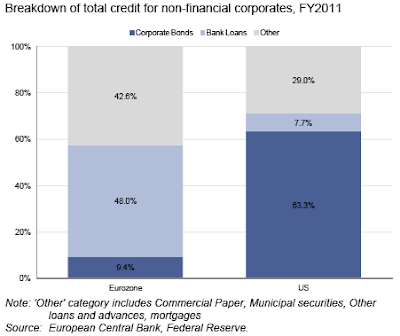 And where are banks largest, dominant players in the economy? Why, in usual suspects... 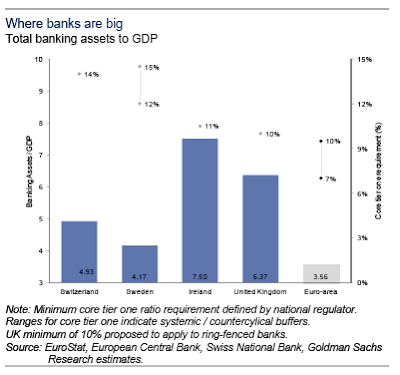 Now, what's the problem with the above chart? Oh, let's see: Swiss and UK bankers are bankers to the world, with more exposures to assets outside their countries than inside. Irish banks listed include some IFSC banks, but... adjusting for that and adjusting for GNP/GDP gap, Irish figure is as follows:


Thus, if we are to control for the international exposures of the banks, the same relative position for Ireland is most likely to be maintained as in the chart, albeit the numbers will be smaller across all banking systems. And now think of adjusting these for the quality of assets held... and weep.


And here's a note for Michael Noonan and his friends at Irish banks: this time it is NOT going to be much different: 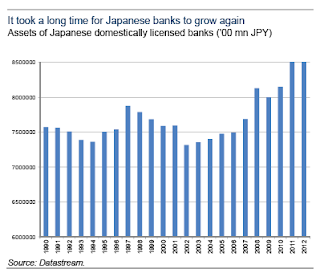 Do note the above is in nominal Yen, which is kinda telling - Japanese banks have not grown since 1990, inflation-adjusted, through probably 2009-2010. And that with Japanese printing cash and piling up public debt like there is no tomorrow between 1990 and today. What hope is there for the return of lending and profitability in Irish banking ca 2014 that the Central Bank and the Government and the banks have been betting on throughout their disastrous disaster management practices 2008-present? 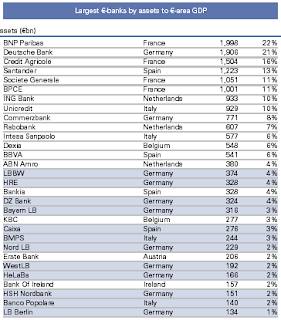 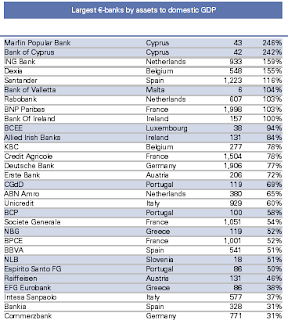 Do note prominent positioning of Ireland's zombies, right there, with Tier Last Marfin, B of Cyprus, and Dexia...

"At the other end of the spectrum, countries with central banks as their supervisor have generally done better, the two exceptions being the Netherlands and Ireland (where supervisors fared badly owing to the huge size of the banks that these countries had relative to their GDP – the sheer size of these made it much too difficult to supervise these, ‘too big to save’ banks in these cases)." So, tell me - if having TBTF banks = "much too difficult to supervise" banking system, how will having Duopoly banking system help supervisory effectiveness? Answer: it will hinder such effectiveness. Instead of being captive to a bunch of banks, Irish regulatory regime will be captive to two banks - incidentally, the very same ones that led capture of regulators back in 1990s-2000s.


Update: In a fair criticism of the GS report, it ignores Solvency II implications, although does cover Basel III and Dodd-Frank. Solvency II omission was pointed out by the @creditplumber / David McKibbin.
Posted by TrueEconomics at 1:03 PM