In the last few days we have been treated to a barrage of the 'sell-side research notes' extolling the virtues of Ireland's economic 'comeback'. Property markets are now, allegedly, on the mend (never mind, the 'mending' bit is just about sizable enough to matter statistically and economically returns property valuations to... err... April 2012 levels). Unmeasurable 'investor confidence' is back at play - never mind that 'investors' are really a handful of buyers of the Irish Government bonds, usually with maturity range well within the cover by the Troika / ESM. Latest twist - cheerful analysis of the Retail Sales data. One note I received on today's Retail Sales figures for September 2012 was issued minutes after CSO published the data, suggesting that the author had absolutely no referencing to actual data published, but simply plucked headlines and strung them up into an analysis.

Having done some more sober analysis of the house prices data (see here), let's take a look at the Retail Sales data.

Core retail sales (ex-motors) value index rose (preliminary estimate - so subject to future revisions) in September to 96.5 from 96 in August. The index is now 2.88% ahead of where it was three months ago in June 2012. Month on month the index is up 0.52%, or statistically indifferent from zero increase. Current level of activity is comparable to May 2012 hen the index stood at 96.4. Year on year index is up 2.22%. 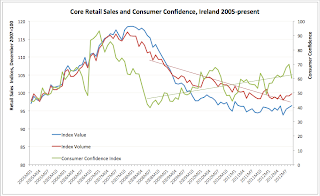 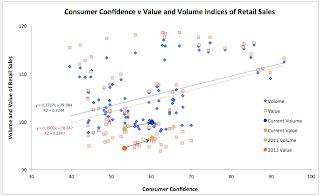 Now, onto my own index: the Retail Sector Activity Index: 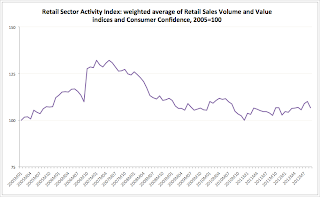 Driven by a combination of weak increases in actual volume and value indices and a substantial drop off in consumer confidence (which fell from 70.0 in August to 60.2 in September), the RSA Index has fallen from 110.11 in August to 106.8 in September. During the current crisis, my RSA Index lagged 1 month actually has much stronger correlation (and positive) with retail sales volume and value (ca 83-84%) than consumer confidence (which has a negative and weak correlation with both value and volume indices - ca -30-34%). Hence it acts as a better predictor of the forthcoming activity. The RSAI is now down m/m, but is up y/y and Q3 average is up on Q2 average.

This means that I can't call the new trend confirmation on the basis of positive monthly rises in Q3 2012 nor can I call the return of the downward trend. Put differently, real data suggests that things are bouncing along flat trend so far. Unlike the claims by some Irish 'analysts' who see "solid retail sales" data.

Posted by TrueEconomics at 4:10 PM