Last night at the Dublin Chamber dinner, Taoiseach Enda Kenny made a rather common, but egregious in its nature statement that Ireland has the highest savings rate in the OECD at 12% GDP. Speaking before him, the President of the Dublin Chamber, Patrick Coveney, made a similar statement, but referenced 14% savings rate. Both speakers were identifying a high savings rate as being an impediment to consumer spending and recovery.

In addition to the above, the Chambers President made another startling juxtaposition. In his speech he said that:


Let me deal first with the last set of claims. In the Irish economy, savings are used to pay down debts (thus supporting deleveraging of the households and companies, and preventing collapse of our banks) and invest in economic activity. Reducing the debt-repayment component of savings would require a default/restructuring of private debts. The remainder of our savings goes to finance investment (direct equity & direct lending to businesses) and deposits in the banks (which in turn normally finance lending). So which part of our savings would Patrick Coveney like to cut? The banks bit (precipitating collapse of the banks) or the investment bit (precipitating further decline in investment)?

I am not even going to ask Mr Coveney as to what he might suggest that the Government should do to cut our savings rate. Impose huge wealth taxes, or go straight to a large-scale expropriations of 'excessive' savings? Both will do wonders to Ireland's reputation abroad, let alone to the dynamics of future investment at home.

Instead, lets move on to the myths both speakers were keen on repeating - the myths of our allegedly massively high savings rates. All of the data below is taken from the IMF WEO database. 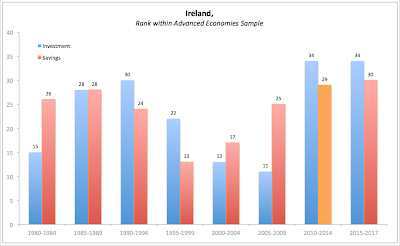 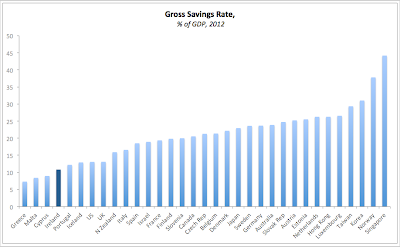 But wait, you might say, surely we are saving as an economy more today than in the past? Oops... 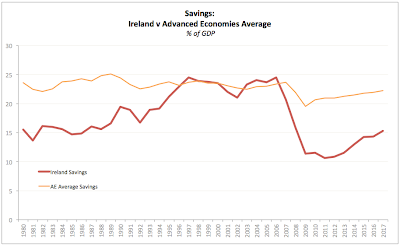 And yes, Mr Coveney, savings and investment are linked in Ireland: 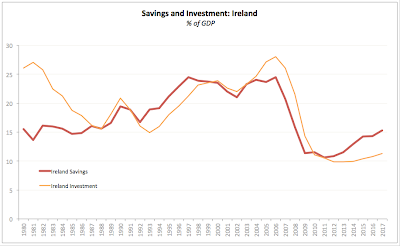 And the gap between savings and investment in Ireland - explained in part by the banks claims on our savings via loans repayments: 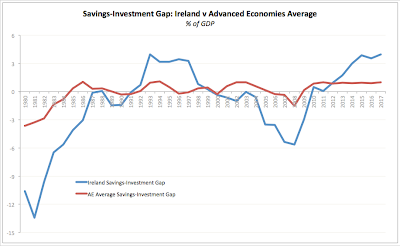 ... well that gap is currently at the advanced economies average and it was below that average during the crisis so far.

In other words, there is no 'excess' savings in Ireland. As this economy continues to struggle with the banks debts (ah, the Chambers dinner was sponsored by one of the Pillar Banks) our savings-investment gap is forecast to rise above the advanced economies average in 2013-2017. That is the illustration of the Taoiseach's famous dictum that he won't have 'defaulter' written on his forehead. So clean forehead for our Taoiseach means no investment for businesses. Simples...

Posted by TrueEconomics at 9:09 AM

Who is An Taoiseach's economic adviser ?

He (I know that it is not a female) should resign or be dismissed.

If he approves of the thinking behind the remarks, he should also be stripped of his degrees.

If he doesn't, he should express his disagreement, and since he has had enough time to educate the Taoiseach, resignation is appropriate, as either the job is impossible or he (the adviser) is totally failing in it.

I am sure other reasons for such a course will suggest themselves, but I will not be drawn on those at this time.