A neat summery from BNP on (1) current bond ratings, and (2) links between ratings and eligibility for inclusion in bond indices: 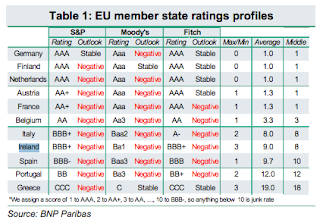 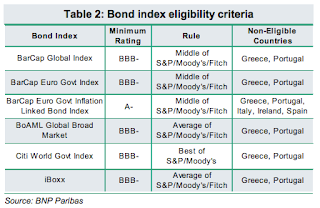 And a few words on the importance of Spanish ratings risks to ESM/OMT etc:

"As has been demonstrated throughout the EU debt crisis, credit ratings can have a material impact on sovereign bond markets. ...However, not all downgrades have the same effect on bond yields. More specifically, the loss of an AAA rating (S&P on France and Austria, for example) and, more importantly, the loss of investment-grade status (Greece, Portugal) matter more than other downgrades and may have dire consequences for sovereign bonds, because of the significance of those two ratings levels as critical thresholds for investors."

"The downgrade to sub-investment grade, in particular, is linked to the eligibility criteria for various global bond indices, i.e. the minimum rating required for a sovereign bond to be included in an index. Fund managers tend to track the performance of major bond indices and, as a result, when a country’s sovereign bonds drop out of an index due to ratings ineligibility, investors have to adjust their portfolios and offload the country’s bonds. So, any downgrades to sub-investment grade could lead to massive selling flows and have a huge impact on the bond yields of the country in question. More than that, quite often, markets tend to front-run the ratings agencies and start to offload the bonds of the country they suspect may be downgraded to sub-investment grade in the near-term future."


"... Currently, Spanish ratings are getting extremely close to those same [as Portugal in 2011 downgrade case] eligibility thresholds. In general, BBB- is the critical limit for bond index eligibility, but different indices have different rules on calculating a single rating for each country (they can use, say, the average, middle, best of all, or specific ratings). For Spain, currently rated BBB-/Baa3/BBB, any trio of one-notch downgrades is going to push the average rating below the eligibility threshold."

"Credit ratings are important not only with respect to eligibility for the major bond indices, but also in calculating the haircut the ECB applies to collateral posted by European banks. According to the ECB’s graduated haircut schedule, an extra 5% haircut is applied to ratings in the BBB+/BBB/BBB- range (the ECB uses the best rating of S&P, Moody’s, Fitch and DBRS). This extra 5% haircut applies only to category 1 assets, which include government bonds. For other assets, like bank, corporate and agency debt, this extra haircut can reach up to 23.5%, creating severe additional collateral requirements for banks."

"This is particularly important for Spanish banks, which tend to absorb around EUR 400bn of liquidity from ECB’s open market operations. The ECB recently announced that it is suspending the application of the minimum credit-rating threshold to its collateral eligibility requirements for the purposes of the Eurosystem’s credit operations for marketable debt securities issued or guaranteed by the central government of countries that are eligible for OMTs or are under an EU-IMF programme and comply with the associated conditions. However, this does not affect the application of the previously mentioned graduated haircut approach."

"So, focusing on Spain, a one-notch downgrade by DBRS would mean that marketable securities issued by Spain would fall into the higher haircut range and Spanish banks would have to post additional collateral with the ECB. A trio of one-notch downgrades by S&P, Moody’s and Fitch would push the Spanish average rating below BBB- and Spanish bonds out of those bond indices that use the average rating as the threshold for eligibility. For those bond indices that use the middle rating of S&P/Moody’s/Fitch (or the better of the first two), a one notch downgrade by each of Moody’s and S&P would be enough to push the single rating below the eligibility threshold, too. Because of this, any upcoming developments in relation to (1) direct bank recapitalisation by the ESM, (2) a Spanish request for a precautionary programme, (3) economic and social developments in Spain and (4) funding rates are going to be critical, as they could prompt further downgrades, with severe implications for the Spanish bond market."

"If any of these downgrade combinations takes place before Spain has made an official request for a programme, we believe a request would, in effect, become inevitable. At the same time, if Spain asked for a programme tomorrow, this would not necessarily mean that any further downgrades would be off the cards. Almost all of the ratings agencies have said that they will have to assess whether ESM intervention is likely to become a complement to or a substitute for market access. If it turns out to be the latter, this would be in line with a downgrade to the sub-investment-grade category."

"At this point, we should mention that if Spanish bonds are removed from the global bond indices, this could have an impact on Italian bonds as well. The reason is that some investors may have replaced their Spanish bond holdings with an Italian bond proxy in order to benefit from better liquidity and protect themselves from panic selling, should Spain be downgraded further. As a result, if Spanish bonds’ drop out of various indices, these investors could suddenly find themselves overweight Italy versus the index, so they would have to sell some of their Italian bonds to re-adjust their weightings and track the index."

"We saw this kind of move when Portugal was downgraded to junk by Moody’s in July 2011 (taking into account that this was not completely expected by the markets and PGB liquidity had already dried up). In the five days after Portugal’s downgrade, 5y Italian and Spanish yields jumped by 95bp and 65bp, respectively."

Nasty prospect, albeit the risks are diminishing, in the short run, imo.