CSO released data for gross value added in agriculture for 2009-2011 yesterday - a set of data that reveals the final figures for the various sources of income in Irish agriculture. The good news is that in 2011 the subsidies junkies have managed (in part on foot of booming agricultural prices) to derive some net value added from their activities. The bad news is that ba far the Agricultural sector in Ireland remains unproductive.

The core figures are defined as follows:
I have written on many occasions before that Irish agriculture is an extension of the welfare state, in so far as most of the value added in it is provided for by the subsidies. Here are the latest details: 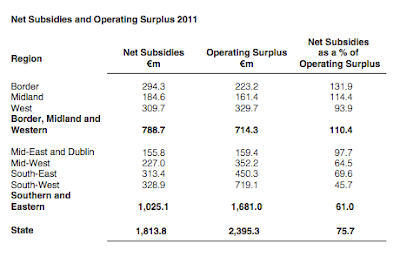 Over the last 3 years:
All of the above means that absent net subsidies, Irish Agriculture's contribution to the economy (net of costs) would have been: a loss of €367.4 million in 2009, a gain of €192.5 million in 2010 and a gain of €581.5 million in 2011. With a sector that has managed to add - out of its own activity - just €406.6 million to the economy cumulative over last 3 years, we have a lot of policy and marketing hoopla about the value of Ireland's Agriculture.

The table below summarizes inputs and outputs in the GVA calculation for Irish Agriculture:

Even taking into the account wages paid by and to Irish farmers, the overall Agriculture's importance to the economy is (on the net) minor. Oh, and above does not account for the cost of running the Department of Agriculture and other tax-related spending that effectively is an added cost to the taxpayers.
Posted by TrueEconomics at 9:17 AM