Last night I came across the latest data from the IMF on the overall levels of indebtedness and leverage across a number of countries. Here's the original data: 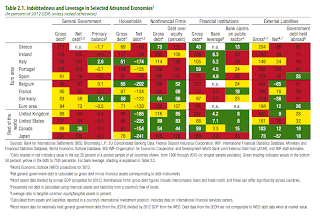 Much can be taken out of the above. For the purpose of discussion below, I define real economic debt as a sum of household, non-financial corporate and government debts, excluding financial firms' debts. This real economic debt is liability of the Irish economy: households, private enterprises and public sector providers of goods and services. 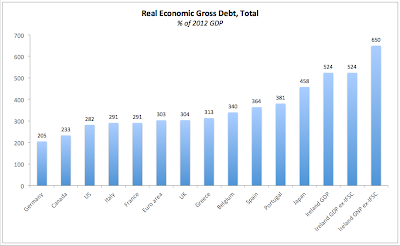 Ireland's total real economic debt runs at a staggering 524% of our GDP and 650% of our GNP. In fact, I use 24% GDP/GNP gap as a basis for adjustment which is significantly less than the current gap, but is consistent with 2011-2012 (to-date) average. Put into perspective:


Our real economic debt can be decomposed into the following three components contributions: 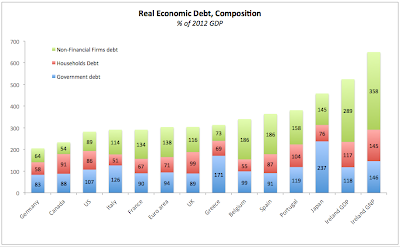 In other words, the above chart clearly shows that Ireland's core debt overhang arises not from the Government finances, but from accumulation of liabilities on the side of the companies. More than that:


Thus, with the Government policy firmly focused on taxing households to save own balancesheet, we have a perverse situation that the economy is dealing with debt overhang in Government debt that is more benign than the debt overhangs in the sectors the Government is obliterating. Households faced with increased taxation to pay for Government debts and deficits implies lower spending on goods and services and lower ability to repay household debt. Thus higher taxes on households (direct and indirect, including aggressive extraction of income via semi-states' charges) imply growing burden of the debt overhang in the private sectors (firms and households).


Adding financial debts to the overall real economic debt in the economy forces Ireland into a truly unprecedented position vis-a-vis other countries in the sample. (Note - adjustment for IFSC is mine). 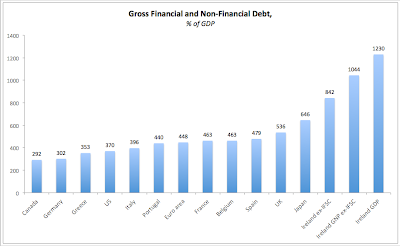 Using the bounds for debt of 90% (consistent with upper range for Checchetti, Mohanty and Zampolli (2011) and Reinhart, Reinhart & Rogoff (2012)), the levels of cumulated real economy debts that are consistent with reducing future long-term potential growth in the economy are taken to be 270% of GDP. Hence: 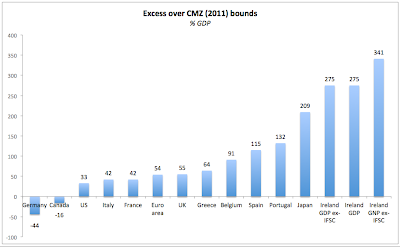 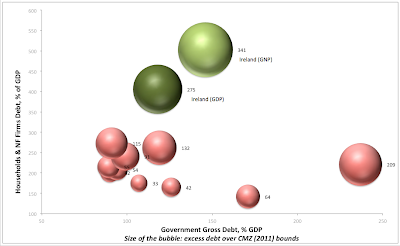 In the above, the larger the size of the bubble, the greater is the drag on future economic growth from debt. The further to the right on the chart the bubble is located, the greater is the problem associated with Government debt (as opposed to other forms of debt). What the above shows is that Ireland's debt crisis is truly unique in size, but it also shows that the most acute crisis is not in the Government debt, but in private sectors debt.

Now, at 4.5% per annum cost of funding overall debt, irish economy interest rate bill on the above levels of real economic indebtedness runs at ca 29.2% of our GNP. Do the comparative here - interest rate bill equivalent to the total annual output of the Irish Industry (that's right - all of our Industrial output in 2011 amounted to less than 29.3% of our GNP. This is deemed to be 'long-term sustainable'... right...


Note: In my presentation at a private dinner event yesterday I referenced by earlier estimate of the total economic debt in Ireland at 420% of GDP. My 2011 estimate was ca 400% GDP. These figures have been published by me in the Sunday Times and also correspond closely to the 2010 figures cited by Minister Noonan in the Dail and made public here on this blog. They also were confirmed by Peter Mathews TD. My estimates were based on publicly available data which is less complete than data available to the IMF.
Posted by TrueEconomics at 5:13 PM

"The total amount of credit outstanding to Irish private-sector enterprises on the balance sheet of resident credit institutions was €213.6 billion at end-Q2 2012. Approximately 55 per cent of this amount was with respect to the financial intermediation sector, which would include holdings of debt securities issued by the NAMA Master SPV5 and other financial vehicle corporations. Excluding financial intermediation, the total amount of private-sector enterprise credit outstanding was €96.2 billion at end-Q2 2012."

I can't. IMF figures include corporate bonds, and other debt raised via non-banks. CBofI data includes only debt raised via Irish-regulated credit institutions, Private debt and direct debt not covered. Aside from this, as I said, there are general discrepancies with the Minister for Finance stated figures and figures I estimated earlier. These are sizable.

Indeed, the minister answered a Dail question on this in May and I think he refers to the CSO Institutional Sector accounts for the household debt figure of €194,219 m but I can't spot the €347,002 m he references for NFCs in there.

At any rate, would the BF.90 (net financial assets) at the end of Table 3 of -€192 bn not be a more reasonable representation of their debts?

Why do you even consider corporate debts?? If the multinacionals pulled out of Ireland, they wouldn't be passing their debts to us would they?? Unless Biffo has also issued a guarantee on all corporate debts as well:o??????
But even without the corporate debts, the figures are horrific!

Very interesting post. How much of the debt is owed to Irish residents and how much is owed externally?

One man's debt liability, is, literally, another man's asset, so that while interest payments made by a debtor cannot be spent on goods and services by that debtor, the interest income received by a creditor can be spent on such goods and services. It would seem that in order to get the full picture this circular flow should be taken into consideration.

Interest payments on debt owed to external parties would be a drain, of course, but this could be counterbalanced in part by Irish held debt securities that generate an income stream sourced from other countries.

Overall it seems that the internal/external and gross/net aspects also need to be considered.

Constantin, Thank you for your excellent work. I do think though that you cannot show the decomposition of Irish debt and leave some of the unique factors uncommented. The Government Debt and the Household debt figures are correct and comparable. The Corporate - Financial and non-Financial debt figures paint a very misleading picture. As you note and as you have tried to adjust - the IFSC is one major factor. As you also try to adjust for - the amount of Foreign multinationals distort the picture. Your remaining figure looks awfully high. Which corporates are holding this debt? I really think that this should be explained better as it is just not plausible. Is it possible that property lending to companies is also shown here, leading to double-counting with household debt? Not sure? I do not disagree with your ultimate conclusion which shows that it will be a long journey for Ireland but I still think that we should try to explain the composition of these debt figures and adjust them correctly

As I said: these are IMF figures. All queries should be addressed to them. What you are asking me to do here is to undertake work well in excess of what CSO and any other organization is capable of and in the absence of any data. It is one of the most egregious and absurd arguments against my work that I have encountered so far. If you have a complaint about the figures released and published by the IMF - please direct your disapproval to them, or at the very least to those who you & I pay to produce these figures and who are failing to deliver them.

Constantin you really have an attitude problem, all you should have answered to the last poster is simply ''sorry these are not my figures.''
I do agree with 90% of your work, just think you should drop the attitude, remember it is not the people's fault.