Unedited version of my Sunday Times article from July 22.


These days, with nearly 15 percent unemployment, and almost 530,000 currently in receipt of some unemployment supports, the minds of Irish policymakers and analysts are rightly preoccupied with jobs creation. Every euro of new investment is paraded through the media as the evidence of regained confidence in the economy. This week, even the insolvent Irish Government got into the game of ‘creating jobs’ with an ‘investment stimulus’.

Alas, economics of jobs creation is an entirely different discipline from the political PR accompanying it. In the real world, some private and public jobs are created on the basis of sustainable long-term demand for skills. Others are generated on the foot of tax advantages and subsidies, including stimulus. In the short run, the latter types of jobs can still yield a positive boost to economic activity. But in the longer run, they are not sustainable and drain resources that can be better allocated to other areas. The ultimate difference between the two types is found in productivity growth associated, or the competitiveness gain or loss generated in the economy.

The prospects of Irish economic recovery have been rhetorically coupled with the improvements in our cost competitiveness since early 2008. And for a good reason. Rapid deterioration in competitiveness in years before the crisis is what got us into the situation where structural collapse of the economy was inevitable.

During the Celtic Garfield era of 2001-2007, Irish Harmonized Competitiveness Indicators (HCIs) have deteriorated by some 26%. Our productivity growth, stripping out effects of MNCs transfer pricing and tax arbitrage, has been running well below the rate of the advanced economies average. In years of the property bubble, Ireland was the least competitive economy in the entire euro area.

Structurally, our lack of competitiveness was underpinned by the labour costs inflation in relation to producer and consumer prices. Consumer costs-related competitiveness indicator for Ireland deteriorated by 38 percent between the end of 2001 and mid-2008, more than one-and-a-half times the rate of deterioration in producer costs-linked measure. Another, even more pervasive and long-term force at play was creation of hundreds of thousands of jobs in the sectors, like building and construction, domestic retail and finance that lagged in value-added well behind the exporting sectors.

This was not a model of sustainable jobs creation. Instead of incentivising investment in real skills and aptitude to work and entrepreneurship, we taught our younger generation to expect a €40-45,000 starting gig in a ‘professional’ occupation or laying bricks at a construction site. Not surprisingly, uptake of degrees in harder sciences and more mathematically intensive fields of business studies slumped, while degrees in ‘softer’ social and cultural studies were booming. The workforce we were producing had a rapidly expanding mismatch between pay expectations, career prospects, and reality of an internationally competitive economy.

Placated by the opportunity to locate in the corporate tax haven, our MNCs were drumming up the myth of the superior workforce with great skills and education. The Government and its quasi-official mouthpieces of economic analysis in academia, banks, and financial and professional services were only happy to repeat the same line.

The crisis laid bare the truths about our fabled competitiveness outside the corporate tax arbitrage opportunities.

Since then, the focus of the Government labour market reforms, in rhetoric, if not in real terms, has been on regaining cost competitiveness. Sadly, this process so far replicates, rather than corrects the very same errors of judgement we pursued before the crisis erupted.

In terms of headline metrics, things are looking up. Our harmonised competitiveness indicator (HCI) has improved by 5% between January 2009 and April 2012 – the latest data available. However, these gains are accounted for by two drivers. Firstly, jobs destruction in the construction and retail sectors has led to rapid elimination of less productive – from economic value-added point of view – activities. Secondly, domestic business activity collapse added price deflation to the equation, distorting gains from any real productivity improvements. Thus, our HCI deflated by producer prices has fallen 7.7% over the above period of time, while consumer prices-deflated HCI dropped 12.5%.

Thus, much still remains to be done on the competitiveness front, especially since deflationary pressures in the economy are no longer rampant. The momentum of gains in competitiveness experienced in 2008-2010 has slowed dramatically and is likely to continue declining.

On the one hand, jobs destruction has moderated markedly, while across the economy overall earnings are rising. Wages inflation in several sectors where skills shortages are present, such as ICT and internationally traded services, now complements declining competitiveness of individual tax policies.

The skills crunch is evident both via the earnings inflation within the larger size enterprises and by occupational categories. earnings of Managers, professional and associated professionals rose 5.7% y/y in Q1 2012 and are now 1.1% ahead of where they were in Q1 2009. Earnings for clerical, sales and service employees are up 2.4% y/y and down almost 2% on 2009.

The real problem with our labour costs competitiveness is that with rising tax burdens it is becoming increasingly difficult to import skills and our system of training and education simply cannot deliver on the growing demand for specialist knowledge. The former problem has been repeatedly highlighted by the indigenous exporters. The latter has been a major talking point for the larger MNCs. The latest example of this is PayPal, whose global operations vice-president Louise Phelan warned this week that Ireland needs to focus on language skills, especially in German, Dutch and Nordic languages “to protect our status as a European gateway”.

Sadly, the Government is listening to the latter more than to the indigenous entrepreneurs.

Reforming education system is a long-term process and should not be tailored to the current demand for narrow skills. Instead, it should aim to provide broad and diversified education base, including leading (not obscure) modern languages, proper teaching of core subjects, such as history, philosophy, arts and sciences.

Such reforms will not have a direct impact on the likes of PayPal’s ability to hire people with very narrow skill sets. Which means that Ireland will have to systemically reduce the costs of importing human capital.

To derive real competitive advantage anchored in sustainable jobs creation and productivity growth, we need to focus on creating the right mix of tax incentives, educational supports and immigration regulations to lower the cost of employing highly skilled workers and increase returns to individual investments in education and training. Let us then leave the job of selecting which areas of study should be pursued to those who intend to succeed in the market place. 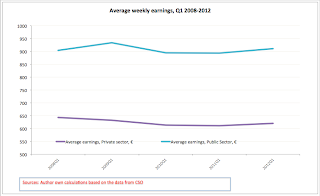 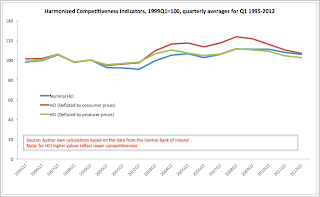 Box-out
The CMA Global Sovereign Credit Risk Report for the second quarter 2012 shows Ireland improving its ranking position from the 7th highest risk sovereign debt issuer in the world in Q1 2012 to the 8th – a gain that is, on the surface, should signal that the country Credit Default Spreads (CDS) were improving compared to its peers. While Ireland’s CDS have indeed improved during the quarter falling below 600 basis points (bps) in the last two days of June for the first time since the first week of May, in effect Ireland ended Q2 2012 pretty much where it started it in terms of CDS levels. What really propelled Irish rankings gain was the return of Greece to the CDS markets few weeks after the country ‘selective default’. In fact, Ireland’s rate of improvement (by 1 notch) is identical to that of Cyprus and marks below average performance for the group of the highest risk sovereigns. Perhaps even more revealing is the comparative between Ireland and Iceland. The latter is ranked 20th in the risk league table, improving in Q2 2012 by two ranks. At the end of June, Icelandic 5 year CDS were trading at 290 bps, with implied cumulative probability of country default over the 5 years horizon of 22.9%. Ireland’s CDS were trading at 554 bps with implied cumulative probability of default of 38.6%.

Posted by TrueEconomics at 8:24 AM

In relation to the wage spiral we witnessed from c2000 to 2007 what portion of this was property bubble related ? It seems to me that as banks moved away from pricing housing off long run yields to an ability to repay mortgage metric which improved almost daily as interest rates fell,meant that as house prices rose wage rate demand rose in tandem. This factor must have had a monumental influence on wage rate demand coupled with the other beauty namely Benchmarking I & II.

Throughout Ireland there is an epidemic of cartels which are artificially increasing our cost base. Also many companies are abusing their position of dominance to evict smaller competitors from the market. They are doing this under the guise of a recession whereby small operators going bust is the norm. This all leads to higher prices and a significant loss in competitiveness.

In 2004, Dr. John Fingleton as head of the Competition Authority stated that anticompetitive practices were costing the Irish economy circa €4 billion per annum which equates to approximately €2,400 per household. Now if each household in Ireland had an extra €2,400 to spend, it would certainly give the domestic economy the kick start it needs. Moreover, the reduction in the cost base would make Irish exports more competitive and increase Ireland’s attractiveness as a tourist destination.

If one takes Dr. Fingleton’s figure as correct (personally I believe it to be greater), then the lack of competition regulation in the naughties alone has cost the Irish economy at least €40 billion, more than the Anglo bailout! I really think this deserves more research.