An interesting study: “Credit Supply and Corporate Innovation” by Mario Daniele Amore, Cédric Schneider and Alminas Zaldokas (July 19, 2012, link) covers the impact of banking sector deregulation in the US on corporate innovation.

The authors present evidence that “banking development plays a key role in technological progress. We focus on firms’ innovative performance, measured by patent-based metrics, and employ exogenous variations in banking development arising from the staggered deregulation of banking activities across US states during the 1980s and 1990s. We find that deregulation had significant beneficial effects on the quantity and quality of innovation activities, especially for firms highly dependent on external capital and located closer to entering banks. Furthermore, we find that these results are partly driven by a greater ability of deregulated banks to geographically diversify credit risk.”

Figure 1 shows “the association between state-level innovative activity, as measured by the number of patents, and the total bank credit supply in the state. While it suggests that wider access to bank loans may be associated with a higher degree of innovation, this evidence is plagued by the endogeneity of financial development. Arguably, general economic conditions, industry characteristics and other unobserved factors may influence both firms’ innovation and credit availability, thus biasing the effect of finance on technological progress. In addition, the effect may even be reversed if firms with higher value-added projects create demand for more efficient financial institutions. Our contribution is to establish the causal effect of banking development on innovation.” 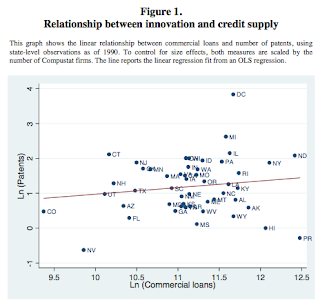 Patents:
“Our result suggests that deregulation had a beneficial effect on the number of patents over the analyzed period. In particular, allowing out-of-state banks to enter the state led to a significant increase in the number of granted patents after controlling for state and application year fixed effects.”

Overall: “the deregulation coefficient [is] both statistically and economically relevant, indicating a 12.6% increase in patenting” due to deregulation.

Quality of innovation:
The study also shows that deregulation has led to an increase in quality of innovation as measured by the quality and nature of patents. “…interstate banking deregulation led to a significant and economically relevant increase in the quality of patents. … indicating a 10.1% increase in expected forward citation counts.” “…interstate banking deregulation had a positive and significant effect on the generality of patents: firms subject to deregulation exhibited a higher propensity to patent within broader technological fields,” and “firms increased the originality of patents” in response to financial deregulation. “Taken together with our previous finding on citations, these results reinforce the notion that deregulation induced a change in the type of firms’ innovative activities. More general and original patents require a bolder innovation policy. The results also further suggest that firms did not simply patent existing innovation to provide hard information to out-of-state banks.”

Effectiveness over time:
Dynamic effects “…become larger as we move forward from the reform year, with the largest effect corresponding to six and seven years after interstate banking deregulation.”

Industry effects:
“…the positive effect of interstate banking deregulation on firm innovation is more pronounced for firms operating in industries that are highly dependent upon external finance.”

Effects on financial constraints:
“Turning our attention to firm-level characteristics, we further posit that our finding should be stronger for firms that were more dependent upon bank credit prior to deregulation. …the effect of deregulation on firm patents was positive and statistically significant both for young and non-young firms. However, the economic magnitude is much larger among young firms: while young firms subject to interstate banking deregulation experienced a 22.7% increase in patents, the effect is 11.7% for non-young firms.” So that “…the effect of interstate banking deregulation was economically more relevant among constrained firms…”

Alternative channels of funding:
“Next, we sort firms according to whether they were assigned a long term bond rating by Standard&Poors. By allowing firms to access public debt markets, a bond rating is related to lower credit constraints …and, consequently, lower responsiveness to changes in bank finance. We construct two subsamples depending on whether a firm reports a bond rating or not in any year of the period 1985-95. …the deregulation effect on innovation is significantly larger for firms experiencing tougher access to the public bond market. In fact, … firms that do not have public bonds outstanding over 1985-95 experienced an increase in innovative activities after the interstate banking deregulation while there was no statistically significant effect for firms that were active in the public bond market.”

Effects on industry output:
“The last step of our analysis is to test the association between industry-level output growth and innovation following deregulation. We posit that the increased innovation stemming from deregulation fostered output growth favoring the most efficient firms within an industry. …we observe that the effect of deregulation laws on firm patenting was largest in primary metal, furniture and fixtures and petroleum refining and related industries. When we compare these industry-level effects to future industry growth, we find a close relationship. …A positive relationship, significant at 7%, suggests that industries where deregulation had a higher impact on patenting experienced a subsequent increase in output growth. For instance, the five industries with largest deregulation estimates grew, on average, by 4.9% annually over 1995- 2000. By contrast, the five industries with the smallest deregulation estimates grew, on average, by 0.2%. Furthermore, we find no difference in growth rates between these groups of industries prior to deregulation (in 1980-85), and also we find that the association fades away over a long period.”
Posted by TrueEconomics at 10:28 AM

Growth has to be put in context.We had exhuberant growth in the 2000s with the unforseen effects of deregulation coming to bite us. I was hoping for your reflection on all of this with some history lessons (Savings&Loans fiasco in the US etc.)

Banking development plays a key role in technological progress. I agree. Thanks for sharing the figures that proved this here.