An unedited version of my Sunday Times article from July 1.

One of the points of contention in modern economics is the role of fiscal spending shocks on economic growth. Various empirical estimates suggest Irish fiscal multiplier at 0.3-0.4, implying that for every euro of additional Government spending we should get a €1.30-€1.40 in GDP uplift. However, these are based on models that do not take into the account our current conditions. Despite this fact, Irish policymakers continue talking about the need for Government to stimulate the economy, while various think tanks continue to argue that Ireland should abandon fiscal stabilization or more aggressively tax private incomes to deliver a boost to our spending.

International research on this matter is more advanced, although it too leaves much room for a debate.

What IMF researchers did find is that the initial conditions for stimulus do matter in determining its effectiveness – an issue generally ignored in the domestic debates about the topic.

Under a pegged exchange rate regime, similar to Ireland’s but still allowing for some exchange rate and interest rates adjustments, trade balance is likely to worsen in response to a fiscal stimulus, while output can be expected to rise. Domestic investment and consumption will decline in response to the positive stimulus shock. These factors are likely to be even more pronounced in the case of Ireland’s currency ‘peg’ that permits no adjustment in real exchange rate except via domestic inflation.

The role of weak public finances in determining the effectiveness of fiscal spending stimulus is also revealing. The study defines fiscally constrained conditions as the gross government debt exceeding 100 percent of GDP and/or government deficit in excess of 6 percent of GDP. Both of these are present in the case of Ireland. On average, the study shows that consumption response to fiscal stimulus is negative-to-zero following the stimulus, but becomes positive in the medium term. Impact on output and investment is negative. The core reasons for the adverse effects of fiscal expenditure on economic performance are losses from stimulus through increased imports of goods and services by the State, internal re-inflation of the economy through inputs prices, plus the expectation from the private sector consumers and producers of higher future taxes required to cover public spending increases.

In the case when financial crisis is present, increase in Government spending results in a positive and strong output expansion, rise in consumption and, with some delay, rise in investment. However, net exports still fall sharply and the stimulus leads to the inflationary loss of external competitiveness in the economy.

The problem with the above results is that the IMF study still does not consider what happens to a fiscal stimulus in a country like Ireland, combining a strict currency peg, exclusive reliance on trade surplus for growth generation and characterized by historically high levels of fiscal imbalances and financial system collapse. In other words, even the IMF research as imprecise as it is, is far from conclusive.

These are non-trivial problems in the case of Ireland. Official estimates for fiscal policy multiplier in this country range between 0.38 (European Commission) and 0.4 (Department of Finance).  These are based on relatively simplistic models and are, therefore, likely to be challenged by the reality of our current conditions. A more recent study from the Deutsche Bank cites Irish fiscal multiplier of 0.3 without specifying the methodology used in deriving it. Either way, no credible estimate known to me puts the fiscal multiplier above 0.4 for Ireland.

In short, Government stimulus is not exactly an effective means for raising output, even at the times when the economy can take such stimulus without demolishing the Exchequer balancesheet. And lacking precision in estimating the fiscal multiplier, the entire argument in favor of fiscal stimulus is an item of faith, not of scientific analysis.

In my opinion, Ireland does not need a Government expenditure boost. Instead we need a policy shift toward stimulating domestic and international investment, plus the public expenditure rebalancing away from current spending toward some additional capital investment.

Quarterly National Accounts clearly show that the problem with the Irish economy is not the fall off in private or public consumption, but a dramatic collapse in private investment. While private consumption expenditure in Ireland has declined 13.6% relative to the economy’s peak in 2007, net expenditure by Government is down 12.0% (including a decline in public investment). However, overall private investment in the economy is down 67%. 2011 full year capital investment was, unadjusted for inflation, at the level last seen in 1997, while consumption is down ‘only’ to 2005-2006 levels and Government spending is running at around 2006 levels. With nominal GDP falling €33.5 billion between 2007 and 2011, our investment declined €32.6 billion over the same period, personal consumption dropped €12.8 billion, while net Government expenditure on goods and services is down a mere €3.4 billion. Between 2007 and 2011, total voted current expenditure by the Government rose 12%, while total net voted capital expenditure fell 44%.

Adding a Government investment stimulus of €2 billion would have an impact of raising net capital expenditure by the Exchequer in 2012-2014 to the levels 22.4% below those in 2007 and will lift our GDP by under 1.8% according to the EU measure of fiscal multiplier. However, factoring in deterioration in the current account as estimated by the IMF, the net effect might be closer to zero. Based on IMF model re-parameterized to our current conditions, the net result can be as low as 0.1% increase in GDP.

Again, the problem here is the effect of capital spending on our imports. As a highly open economy, Ireland imports most of what it consumes. This includes Government and private capital investment goods – machinery, materials and know-how relating to construction, assembly, installation and operation of modern transport systems, energy and ICT, etc. Some of these imports will continue well beyond the period of actual investment. In other words, using fiscal stimulus to finance public capital investment risks providing some short-term supports for lower skilled Irish labour and few professionals with the lion’s share of expenditure going to the multinational companies supplying capital goods and services into Ireland from abroad.

The fiscal cost of such a stimulus, however, would be exceptionally high. Between 2008 and 2011, Irish Government has managed to cut €4.3 billion off the annual capital spending bill while increasing current spending by €662 million. This resulted in total voted spending reduction of only €3.6 billion. A stimulus of €2 billion on capital investment side will throw the state back to 2009 levels of expenditure, erasing two years worth of consolidation, unless it is financed out of cutting current spending and transferring funds to capital programmes. The extra capital spending will lead to further retrenchment in private consumption and investment, as households and businesses will anticipate relatively rapid uplift in tax burdens to recover the momentum to the fiscal consolidation. This, coupled with already committed €8.6 billion in further fiscal adjustments in the next three years, will further reduce growth effects of the stimulus and shorten its positive effects duration.

Overall, the right course of policies to pursue today requires restructuring of the debt burden carried by the real economy, starting with household debts and stimulating, simultaneously domestic and foreign investment into small and medium enterprises and start-ups. Instead of focusing on the less labor-intensive MNCs’ investments, we need to put in place tax and institutional incentives to increase inflow of equity capital, not new debt, to Irish businesses. Such incentives must target two areas of investment: investment into activities associated with new jobs creation by the SMEs, plus investment into strategic repositioning and restructuring of Irish SMEs to put them onto exporting path.

Lastly, if we really do want to have a stimulus debate, the discussion should not be focusing on creating a net increase in the public expenditure, but on the potential for reallocating some of the funds from the current expenditure side of the Exchequer balancesheet to capital investment. 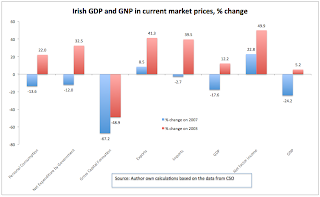 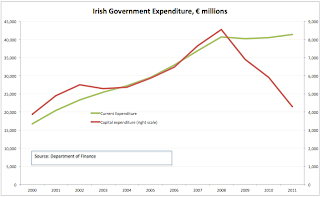 The latest Index of Failed States published this week ranks Ireland the 8th best state in the world. Our overall score in the league table was helped by extremely high performance in some specific indicators. Surprisingly, according to the Index authors, we are having a jolly good time throughout the crisis. Allegedly, Ireland’s problem in terms of emigration is relatively comparable to that found in New Zealand and Germany. Our economy, heavily dominated by MNCs exports in pharma, medical devices and ICT sectors ranks higher in terms of the balance of economic development than majority of the advanced economies that have more diversified and domestically anchored sources of growth. Our ‘balanced development’ model, having led us into the current crisis, is allegedly more sustainable, according to the Index, than that of Canada – a country that escaped the Great Recession. In terms of poverty and economic decline we are better off than France, Japan and New Zealand, which had a much less severe recession than Ireland over the last 5 years. In quality of public services, we are better than Belgium and the UK, and are ranked as highly as Canada. And our elites are less factionalized than those in the vast majority of the states of the Euro area. In short, according to the Foreign Policy, index publisher, Ireland is a veritable safe haven within a tumultuous euro zone, comparable to New Zealand, Luxembourg, Norway and Switzerland. We rank well ahead of Canada, Australia, the UK and the US, as well as all other states that currently receive tens of thousands of Irish emigrants.
Posted by TrueEconomics at 10:11 AM