This week, the Central Statistics Office published long-awaited Quarterly National Accounts for the first quarter 2012, showing that in January-March real Gross Domestic Product fell 1.1 percent to the levels last seen around Q1 2005. Gross National product is down 1.3% and currently running at the levels comparable with Q1 2003 once inflation is factored in. Rampant outflow of multinational profits via tax arbitrage continues unabated, as GDP now exceeds GNP by over 27 percent.

There is really no consolation in the statistical fact that, as the National Accounts suggest, we have narrowly escaped the fate of our worse-off euro area counterparts, who posted three quarters of consecutive real GDP contraction since July 2011. Our true economic activity, measured by GNP is now in decline three quarters in a row in inflation-adjusted terms.

Our real economy, beyond the volatile quarter-on-quarter growth rates comparatives, hardly makes Ireland a poster child for recovery. Instead, it raises some serious questions about current policies course.

Save for Greece, five years into this crisis, we are still the second worst ranked euro area economy when it comes to overall performance across some nineteen major indicators for growth and sustainability.

Our GDP and GNP have posted the deepest contraction of all euro area (EA17) states. Assuming the relatively benign 2012 forecast by the IMF materialise. Q1 results so far point to a much worse outcome than the IMF envisions. Total investment, inclusive of the fabled FDI allegedly raining onto our battered economy, is expected to fall over 62% on 2007 levels by the year end – also the worst performance in the EA17. Despite our bravado about the booming exporting economy, our average rate of growth in exports of goods and services since 2007 is only the fifth highest in the common currency area.

Ireland’s unemployment is up by a massive 220%, the fastest rate of increase in the euro zone. Employment rate is down 20% - the sharpest contraction relative to all peers. Other than Estonia, Ireland will end 2012 with the steepest increase in government spending as a share of GDP – up 18% on 2007 levels. We have the second worst average structural Government deficit for 2007-2012 excluding banks measures and interest payments on our debt. By the end of 2012, our net Government debt (accounting for liquid assets held by the state) will be up more than eight-fold and our gross debt will rise 354%. In both of these metrics Ireland is in a league of its own compared to all other member states of the common currency area.

The latest data National Accounts data confirms the above trends, while majority of the leading economic indicators for Q2 2012 are also pointing to continued stagnation in the economy through June.

Purchasing Manager Indices (PMI) – the best leading indicator of economic activity we have – are signalling virtually zero growth for the first half of 2012. Manufacturing PMI has posted a robust rate of growth in June, but the six months average remains anaemic at 50.7. The other side of the economy – services – is under water with Q2 activity lagging the poor performance achieved in the first quarter.

In the rest of the private economy, things are getting worse, not better. Live register was up, again, in June, with standardized unemployment now at 14.9%. Numbers on long-term unemployment assistance up 6.8% year on year. Factoring in those engaged in State-run training schemes, total number of claimants for unemployment benefits is around 528,600, roughly two claimants to each five persons in full employment. Construction sector, the only hope for many long-term unemployed, posted another monthly contraction in June – marking the sharpest rate of decline since September 2011. Retail sales, are running below 2005 levels every month since January 2009 both in volume and value terms. Despite June monthly rise, consumer confidence has been bouncing up and down along a flat trend since early 2010.

Meanwhile, net voted government spending, excluding interest payments on Government debt and banking sector measures, is up 1.9% year on year in the first half of 2012 against the targeted full year 3.3% decrease. Government investment net of capital receipts is down 19.1%. This means that net voted current expenditure – dominated by social welfare, and wages paid in the public sector – is up 3.3% on same period 2011, against projected annual decrease of 2.2%. Although not quite the emergency budget territory yet, the Exchequer performance is woeful.

And the headwinds are rising when it comes to our external trade. By all leading indicators, our largest external trading partners are either stagnant (the US), shrinking (the Euro area and the UK) or rapidly reducing their imports from Europe (the BRICs and other emerging economies).

The question of whether Ireland can grow its economy out of the current crisis is by now pretty much academic. Which means we need radical growth policy reforms.

Look at the global trends. In every five-year period since 1990, euro zone average annual real economic growth rates came in behind those of the advanced economies. As a group, other advanced economies grew by some 15 percentage points faster than the euro area during the pre-crisis decade. Both, before and since the onset of the Great Recession, euro area has been a drag on growth for more dynamic economies, not a generator of opportunities. Within the euro zone, the healthiest economies during the current crisis – Germany, Finland and Austria – have been more reliant on trade outside the euro area, than any other EA17 state.

This is not about to change in our favour. Data for China shows that the US now outperforms EU as the supplier of Chinese imports. Europe’s trade with BRICs is deteriorating. Combined, BRICs, Latin America and Africa account for less than 5% of our total exports. In the world where the largest growth regions – Asia Pacific, Africa and Latin America are increasingly trading and carrying out investment activities bypassing Europe, Ireland needs to wake up to the new geographies of trade and investment.

Given the severity of economic disruptions during the current crisis, Ireland requires nominal rates of growth in excess of 6-7 percent per annum over the long term. To deliver these, while staying within the euro currency will be a tough but achievable task. This requires drastic increases in real competitiveness (focusing on enhanced competition and new enterprise creation, not wages deflation alone) in domestic markets, including the markets for some of our public sector-supplied services, such as health, education, energy, transport, and so on. We also need aggressive decoupling from the EU in policies on taxation, immigration and regulation, including that in the internationally traded financial services, aiming to stimulate internal and external investment and entrepreneurship. We must review our social policies to incentivise human capital and support families and children in education and other forms of household investments.

Like it or not, but the idea that we must harmonize with Brussels on every matter of policy formation, is the exact opposite of what we should be pursuing. We should play the strategy of our national advantage, not the strategy of a collective demise. 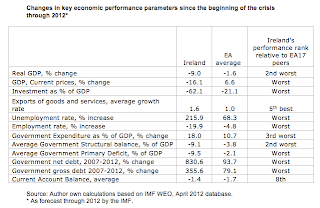 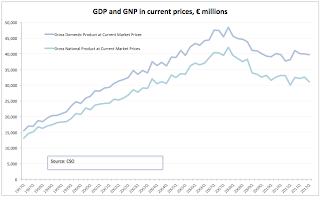 Recent decision by the Government to introduce a market value-based property tax instead of the site value tax is an unfortunate loss of opportunity to fundamentally reform the system of taxation in this country. A tax levied on the property value located on a specific site effectively narrows the tax base to exclude land owners and especially those who hold land for speculative purposes in hope of property value appreciation lifting the values of their sites. In addition, compared to the site value tax, a property levy discourages investment in the most efficient use of land, and reduces returns to ordinary households from property upgrades and retrofits. Perhaps the most ridiculous assertions that emerged out of the Government consideration of the two tax measures to favour the property levy is that a site value tax would be less ‘socially fair’ and less transparent form of taxation compared to the property tax. By excluding large landowners and speculative land banks owners, and under-taxing properties set on larger sites, a property tax will be a de facto subsidy to those who own land over those who own property in proximity to valuable public amendments, such as schools, hospitals and transport links. By relating the volume of tax levy to less apparent and more numerous characteristics of the property rather than more evident and directly comparable values of the adjoining land parcels, the property tax payable within any giving neighbourhood will be far less transparent and more difficult and costly to the state to enforce than a site value tax. In a research paper I compared all measures for raising revenues for public infrastructure investments. The study showed that a site value tax is an economically optimal relative to all other tax measures, both from the points of capturing privately accruing benefits from public investment and enforcement. This paper was presented on numerous occasions to the Government officials and senior civil servants in charge of the tax policy formation over the last three years.

Posted by TrueEconomics at 10:25 AM