Based on data from the US Mint we can now update H1 2012 figures for sales of the US-minted gold coins. As the background - new coins issued by the US Mint, in my opinion, represent a much more fundamentals-linked asset as the demand for these coins differs, if only subtly, from the demand for gold as an asset:


All of this means that correlations between demand for coins and gold price should be less pronounced and that is exactly what we observe throughout the historical and current data: 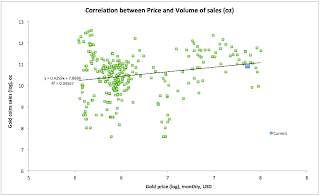 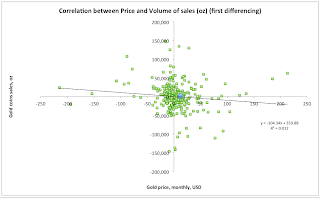 So with that in mind, what should we expect from the gold coins sales. Price of gold has been trending side-ways with some correlation over the 20-day averages since April 2011 ranging between USD1505.5 low in June 2011 to the high of USD1813.5 in August 2011 and into USD1570 in June 2012. With this, we should expect some moderation in demand for gold coins coming from the reduced speculative demand. Since this speculative demand forms a smaller component of overall coins demand, we should expect moderation in demand for coins to bring us down toward historical averages for the crisis period.

At the same time, outside the euro area, global crisis has entered a stage of stabilization (not growth, yet), which means that demand for gold as safe haven (rather than a hedge) should be moderating as well. This can be expected to have a more modest impact on coins sales than on gold sales and especially ETFs-instrumented gold sales.

In other words, fundamentals (inflation expectations, longer-term savings and investment objectives) should be driving current demand for gold coins.

Exactly the same picture - return to fundamentals - is seen in the number of coins sold.

Here's a summary of H1 changes and a chart highlighting dynamics: 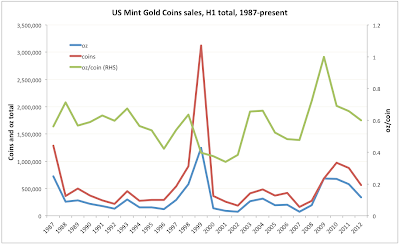 All three parameters (coins sold, oz total sold and oz/coin) are showing that H1 2012 was continuing moderation in demand away from short-term safe haven considerations toward fundamentals-driven consideration and basics of long-term hold demand. All three also show that current demand dynamics for gold coins remain ahead of historical averages. There is neither a panic buying, nor a panic selling and should demand stabilize at around 10% upside to the historical average ex-1999 spike, and recall that this is NEW demand, we will be in the comfortable longer term range that can take us well into global economic growth cycle once it resumes.

PS: This continues to confirm my long-term view on gold coins as more fundamentals-driven and fundamentals-reverting instrument.

Disclaimer:1) I am a non-executive member of the GoldCore Investment Committee2) I am a Director and Head of Research with St.Columbanus AG, where we do not invest in any specific individual commodity3) I am long gold in fixed amount over at least the last 5 years with my allocation being extremely moderate. I hold no assets linked to gold mining or processing companies.
4) I receive no compensation for anything that appears on this blog. Never did and not planning to start now either. Everything your read here is my own personal opinion and not the opinion of any of my employers, current, past or future.
Posted by TrueEconomics at 2:06 PM