An unedited version of my Sunday Times column for July 8, 2012.


Last week’s Euro zone rush to make some sort of a deal on the common currency debt crisis was originally heralded as a ‘path-breaking’ event. A week on, and the markets have largely discounted the deal, while internal disagreements between the member states are tearing it to shreds.

Within a few days following the summit, heads of Bundesbank, Deutsche Bank and Commerzbank came out opposing the core premises of the deal, including the banking union. Finnish, Dutch and Estonian governments strongly disagreed with the ideas of ECB engaging in direct purchases of sovereign bonds, and equal treatment of ESM debt alongside private bondholders. German and Slovak leaders have pledged to respect these countries positions. Austrian parliament’s approval of European Stabilisation Mechanism (ESM) fund came with some severe conditions attached, also altering the June summit conclusions. Lastly, the ECB’s Mario Draghi was clearly guarded about the deal implications for the ECB independence during his press-conference this Thursday.

Meanwhile, the markets have moved from an euphoric reaction to the deal last Friday back to shorting the euro zone by Thursday, despite the ECB interest rate cut.

Despite these, and other developments, the Irish Government continues to put much hope on the June 28-29 deal. Rhetoric aside, the new deal can, at the very best, allow Ireland to convert some of our government debts into the debt held against Irish consumers and mortgage-holders.

The Government assumes that under the deal, ESM will be allowed to retrospectively cancel government debts relating to banks bailouts and convert these into debts held against the banks themselves.

Assuming this is correct, even though the actual agreement does not mention any retrospective actions, Ireland will be able to move some unknown share of its €62.8 billion total exposure to the banking crisis off the government debt account. The Government has already admitted that it is unlikely to recover any of the NPRF funds ‘invested’ in the banks. Which leaves us with roughly €30-35 billion of promissory notes and other debts that can be in theory restructured via ESM.

On the surface, this looks like a great opportunity, to reduce our official Government debt from 117% of GDP to just over 100% of GDP.

However, the problem with this proposition is that it ignores the actual nature of the deal and the likelihood of such a deal going through.

Let’s start from the latter point.

For Ireland to restructure such a large amount of debt, will require one of the following two options. Either all of the states involved in ESM should be given similar retrospective considerations of past sovereign recapitalisations of the banks , or Ireland must be deemed to be a special case, warranting special intervention.

The former will mean that Germany, Belgium, the Netherlands, Austria, not to mention Spain, Portugal, Greece and Cyprus will all have to be granted access to the same restructuring process as Ireland. These states have collectively pumped some €400 billion worth of taxpayers’ funds into their own banking systems during the crisis. ESM’s lending capacity is €500 billion. In other words, ESM will effectively have not enough funds to cover the second bailout for Ireland and extensions of bailouts for Portugal and Greece, let alone provide any backstop for Italy and Spain.

Italy has just raised its forecast budget deficit for 2012 by some 50%, while Spain will require €7-10 billion of additional fiscal cuts to meet its 2012 target. Greece has been lax on tax collection during May and June elections. The likelihood of these countries needing additional funds in 2013-2014 is rising, just as ESM lending capacity is shrinking.

The latter possibility would require making a convincing argument that Ireland’s case is unique when it comes to the hardships of recapitalising the banks. In addition, it will require proving that we desperately need special help. This can only be done by admitting that our deficit and debt adjustments, as envisioned in the multiannual programme with Troika, are not sustainable. This would contradict all Troika assessments of the Irish fiscal stabilization programmes to-date.

Now, let’s take a look at the more important point raised above – the point about the actual nature of this deal. In a nutshell, even if successful, the restructuring of our banks-related debts via ESM, as envisioned by the Government, will accomplish little in terms of lifting the burden of unsustainable debts off the shoulders of the economy.

The reasons for this conjecture are numerous.

Firstly, ESM will still require repayment of all the debts transferred from the Government to the fund. Except, instead of the taxpayers, the onus for repaying these debts will fall on Irish consumers.

Even an undergraduate student of economics knows that when the market power is concentrated in the hands of a small number of players, any taxes and charges imposed onto them will be passed directly to consumers. Now, recall that under the Irish Government plans, Irish banking system is moving toward a Bank of Ireland, plus AIB duopoly. In such an environment, the repayment of banks debts to the ESM will simply involve higher banking services costs to mortgagees and bank accounts holders.

Only a regulated duopoly, under certain conditions, can be prevented from gouging consumers to pay charges, and even then imperfectly. Yet, under the deal, the Government will be ceding control over the banking sector to the ESM (who will own the banks and their debts) and the ECB (who will act as the pan-Euro area supervisor of the banks). This means we can expect mortgages and banking costs to rise and with them, foreclosures, personal insolvencies and business liquidations to accelerate.

Secondly, per Irish Government statements, last week’s deal will allow for relieving the burden of the banks debt and promises to restart our economy back to growth. If the former proposition, as argued above, is questionable, the latter is outright bogus.

Ireland’s crisis is not driven by who owns the banks debts. It is driven by too much debt accumulated in all of the corners of our economy: households, companies, Government, and the banks. But the swap of banks-related debts from the Government to the ESM will not reduce the volume of this debt.

And the Irish economy will have an even lower capacity to repay these debts after the swap.

The Government is already committed to taking €8.6 billion out of the economy between 2013 and 2015. Most of it - €5.7 billion – is officially earmarked for ‘cuts’ to the Government expenditure. However, majority of the expenditure cuts are really nothing more than a concealed tax, as these cuts reallocate the costs of services to the households. In the Budget 2012, single largest expenditure reduction measure was a hike on private insurance costs of medical services.

On top of this, further €1.5-1.8 billion will have to be clawed out of the economy due to changes in the EU funding and reductions in state revenues from banks guarantee and support schemes.

In short, put against the reality of Ireland’s struggling economy and battered by the internal disagreements within the euro zone, the so-called ‘seismic’ deal is now turning into a storm in a teacup. 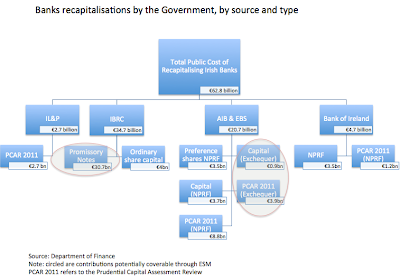 Ireland’s much-awaited ‘return to the bond markets’ on Thursday was greeted in the media by a number of erroneous reports. The truth is simple as are the questions surrounding the NTMA motives for the auction. Firstly, Ireland returned not to the bond markets, but to a short-term T-bill market. Very short-term, in fact. The two markets are significantly different to pretend the auction was a major breakthrough. Greece, in May this year – amidst the on-going collapse of its economy and political turmoil, also ‘returned’ to the T-bill market. As did Portugal in April when it faced an unexpected need for banks supports. Ireland itself last dipped into this market back in September 2010, while facing an impending bailout. T-bills auctions, therefore, are not exactly the vote of confidence. Secondly, 3 months-dated bills are effectively risk-free and do not constitute a recognition of Irish economic revival. Instead, they are backed by the Troika funds. As per questions raised, one that stands out is why did NTMA need this auction to take place in the first place? There is no need for the Government to borrow any money short-term, as our receipts of the Troika funds are regular, fully funded and without any uncertainty. It appears the whole exercise was about a public and investor relations management by the Government. Thus, the only apparent net positive from the auction is that we did not get rejected by the markets. Then again, neither did Greece in May or Portugal in April.
Posted by TrueEconomics at 10:17 AM