This is an unedited version of my Sunday Times article from June 24th.

Since the beginning of this crisis back in 2008, Irish Governments have been quick to point to our exceptional and exemplary trade performance as the sole hope for the recovery. As we know, five years into the crisis, that recovery is still wanting. However, our exports have expanded significantly.

The latest Irish trade in goods statistics, released this week by the CSO and covering the period through April 2012 come on foot of the last week’s release of the more detailed trade statistics for Q1 2012. Both are presenting an alarming picture.

As poor as the above prospects might be, the reality is even more alarming. For trade in goods only, January-April 2012 period total volume of imports was down 7.2% on the same period of 2011, while the volume of exports was down 0.9%, not up 3.3% as forecast in the Budget and the latest SPU. So far, average rate of growth in exports in the first four months of 2012 is -0.6%, down from the same period 2011 average growth rate of 7.4%.

Our trade surplus in goods is up 7.7%, but that is due to the fall-off in imports, especially in Machinery and Transport Equipment and in Chemicals and Related Products categories. The decline in imports, while boosting temporarily our trade balance, can mean only two possible things: either imports will accelerate much faster than exports in months ahead as MNCs rebuild their diminishing stocks of inputs, or MNCs will cut back their exports output even further. Either way, there will be new pressure coming from the external trade side.

The latest decreases in exports are driven by the rapid shrinking of two sub-sectors.

In the first four months of 2012, Medical and Pharmaceutical Products exports have fallen to €7.93 billion from €9.01 billion a year ago – a decline of almost 12%. And this trend is accelerating with 21% drop in April 2012 compare to 12 months ago. The patent cliff, or in common terms, production cuts as drugs go off patent, is now biting hard with blockbuster drugs, such as Lipitor and Viagra either going or scheduled to go soon into competition with generics.

Organic Chemicals have also shrunk in April compare to a year ago, although the first four months of the year exports are still up on 2011.

These two sectors are the giants of Irish exports. In 2010, exports of Medical and Pharmaceutical Products and Organic Chemicals accounted for 49% of our total shipments of goods abroad. By 2011 this number rose to 50%. At the same time, in 2010 and 2011 the two sectors trade surplus (the difference between the value of exports and imports) was close to 88% of our total trade surplus in goods. So far, in the first 4 months of 2012, the same holds, with two sectors contribution to trade surplus now reaching above 95%.

Given the on-going contraction in the sectors activity revealed in April data, and given steady, even rising, share of their contribution to our overall trade in goods, one has to ask a question as to why other sectors of exporting activity are not taking up the slack created by declining pharma sales?

The answer is, unfortunately, as worrying as the stats above.

Since about 2007, when the effects of the upcoming patent cliff started to feed into the decision makers’ diaries, Irish trade development and FDI policy has shifted in the direction of promoting bio-pharmaceutical and biotechnology investment and trade. Much hope was placed on these two sectors stepping up to the plate to replace revenues that were expected to be lost in the pharma sector.

These are yet to bear fruit and, given the accelerating competition worldwide for biotech business and investment, our time maybe running out. The main obstacles to the bio-pharma and biotech sectors development here in Ireland are regulatory, policy and institutional.

One key focus of biotechnology sector research pipeline worldwide is on stem-cell research – the area restricted in Ireland by the lack international (rather than national) standards. The same applies to a number of other areas of R&D intensive sector. Analysis by Pfizer, published two years ago, spelled exactly why Ireland is not at the races when it comes to clinical research, an area that covers huge R&D related spends of major pharmaceutical and biotech companies. We lack competitiveness in terms of providing unified and transparent research infrastructure, absence of a systemic ‘knowledge-sourcing’ opportunities, protracted and unpredictable research approval and trial processes, high cost of sourcing patients for trials, cost and bureaucratic burden relating to regulatory inspections and compliance, and lack of PR and communications platforms that can be used outside Ireland.

Back in 2010, the Research Prioritization Steering Group was set up to review priorities for Ireland’s research funding. Published this March, the Group report marks a significant departure from the previous funding approach for bio-medical sciences, re-focusing funding toward commercialization and jobs creation, away from ‘pure’ science and early stage research. This shift in the approach is both radical and reflective of the realities in the biotechnology and other core high technology sectors to-date. During the previous decade, the state spent €7.3 billion on R&D supports under Government Budget Appropriations or Outlays on R&D, helping to employ some 340 PhDs and 171 non-PhD researchers in the state sector alone in 2010 (down from 431 and 197, respectively in 2008). Yet there is preciously little in terms of exports generation that came from these programmes, and today Ireland has no serious indigenous or FDI-supported start-ups culture in bio-pharma or modern medicine and healthcare.

As competition for the sector investment heats up, and as MNCs-led pharma exports continue to shrink, Ireland needs to move fast to create institutional and regulatory systems that can make us attractive to biotech firms. One simple step would be to reinstate a national bioethics council and integrate organizational systems relating to biotech R&D. The role of the Government’s Science Advisor should become more assertive, outputs-focused and linked directly to providing better information to the Government and policymakers on both the strategic aspects of R&D policies and actual outcomes. Alongside, we need to put in place systems for better assessment of returns on investment in R&D as well as processes that would allow us to act on such evaluations. If entrepreneurship and jobs creation were to become core objectives for R&D backing, we should consider merging commercialization functions of the Science Foundation Ireland with exports development capabilities of the Enterprise Ireland. This should leave SFI dealing solely with pure research, reducing duplication in the system of commercialization supports.

The latest trade figures, taken on their own, should sound an alarm bell in the corridors of power. 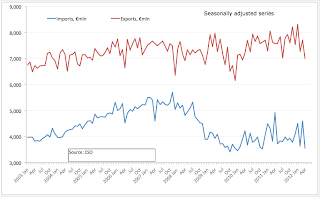 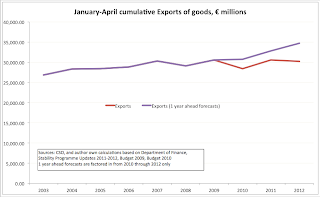 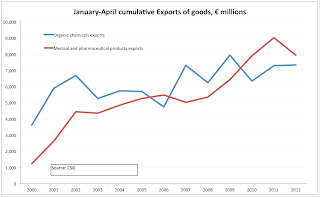 In an economy that is importing pretty much everything it uses for capital investment, having an investment ‘stimulus’ is equivalent to taking each euro of Government spending and sending over a half of it abroad – in aid of imports manufacturers in Germany, France, the UK and further afield. The end result of such a transaction would be a gross gain to the economy from employing lower-skilled domestic workers installing imported capital, minus the value of imports, plus the returns to the installed capital. Given the low value-added of low skilled labour, the net result would most likely be a loss to the economy due to close-to-zero returns on the above transaction and high cost of financing such a stimulus in the current funding conditions. In Ireland, the above negative return is likely to be increased further by the politicized nature of our public ‘investments’. Thus, in my view, the ESRI is correct in its assessment, published this week, of the undesirability of a fiscal stimulus in the current conditions. Minister Howlin, in his response to the ESRI arguments claimed that “…the social imperative of getting people back to work is … a far more important [priority] in the current climate.” His statement betrays disdain for evidence and economic illiteracy of frightening proportions. The Government should not and can not be in the business of wasting people’s resources, including the resources of the unemployed taxpayers, on feel-good ‘policies’. Yet Minister Howlin disagrees, even when the wastefulness of his own belief is factually evidenced by research. The Government should have economically sensible programmes for dealing with the curse of long-term unemployment. These, however, should not come at the expense of creating apparent waste.
Posted by TrueEconomics at 10:48 PM