Per report: “Risks to financial stability have increased since the April 2012 Global Financial Stability Report (GFSR).

Aside from the headlines, some interesting points from the report are: 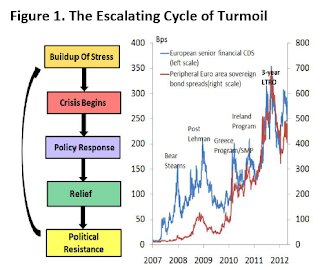 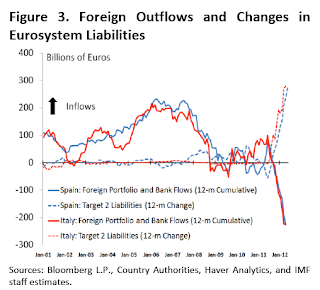 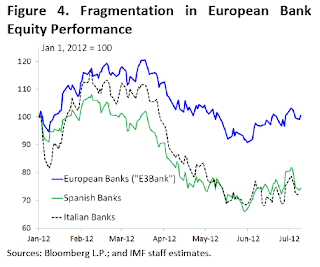 An interesting point on Euro area banking sector [emphasis mine]: “Notwithstanding the ample liquidity provided by the ECB’s refinancing operations, funding conditions for many peripheral banks and firms have deteriorated. Interbank conditions remain strained, with very limited activity in unsecured term markets, and liquidity hoarding by core euro area banks. Bank bond issuance has dropped off precipitously, with little investor demand even at higher interest rates.

“Banks in the euro area periphery have had to turn to the ECB to replace lost funding support, as cross-border wholesale funding dried up, and deposit outflows continue. The April 2012 GFSR noted that EU banks are under pressure to cut back assets, due to funding strains and market pressures, as well as to longer-term structural and regulatory drivers. The sharp reduction in bank balance sheets in the fourth quarter of 2011 continued, albeit at a slower pace, in the first quarter of 2012.

Growth in euro area private sector credit diverged significantly. While credit has contracted in Greece, Spain, Portugal and Ireland, it has remained more stable in some core countries.

Survey data on bank lending conditions show that credit supply remains tight, albeit less so than at the end of 2011, but that demand has also weakened more recently.

Deleveraging is also a concern for many peripheral corporations, given their historic dependence on bank funding and the risk that credit downgrades and diminished investor appetite could drive borrowing costs higher, even for high credit quality issuers.”

Now, here’s an interesting point not raised in the GFSR, but linked to the above observations: equities issuance accounts for roughly 55% of total corporate capital in US and EU. However, because the US corporates issue more bonds-backed debt than their EU counterparts, banks lending accounts for 40% of the European corporate funds raised, against 20% in the US. Which means that banks credit is about twice more important in Europe than in the US in terms of funding corporate capex. In fact, recent research from BCA clearly links US corporates ability to raise direct market funding by-passing banks to faster economic recovery in the US than in EU or Japan.

Add to this equation that European banks are worse capitalized than their US counterparts and that they are more leveraged than their US counterparts and you have a bleak prospect for the EU economy. BCA recently estimated that to bring Euro zone banks’ capital ratios to the levels comparable with the US average, the largest EU banks will have to raise some USD900 billion worth of new capital or cut their assets base by a whooping USD 9 trillion.

But wait, there’s more – you’ve heard about the latest report in the WSJ that Mario Draghi proposed to bail-in senior bondhodlers in Spanish banks? Much of the Irish commentary on this was positive, suggesting that Ireland is now in line for a retrospective deal from the ECB to recover some of the funds we paid to senior bondholders in Anglo and INBS. Setting aside the ‘wishful thinking’ nature of such comments – look at Draghi’s idea implications for EU economic activity. If bail-in does make it to the policy tool of European authorities, funding for the EA17 banks will only become more expensive in the medium and long term (risk premium on ‘bail-in probability’), which, in turn will mean even less credit for corporates, which will mean even less capex, and thus even lower prospect of recovery.

You know the story – pull one end of the carriage out of the quicksand pit, the other end sinks deeper… Let me quote BCA: “In Japan, credit contraction lasted well over nine years in the aftermath of the asset bubble bust. During that time, deflation prevailed and economic growth averaged a measly 0.5% annual pace.” Much of hope for Europe then? Not really. Recall that Japan had aggressive fiscal and monetary policies at its disposal plus booming global markets when it was undergoing credit bust. We, however, have psychotic monetary policy, no fiscal policy room and are running debt deflation cycle amidst global economic slowdown.

IMF is also on the note here: “Policymakers must resolve the uncertainty about bank asset quality and support the strengthening of banks’ balance sheets. Bank capital or funding structures in many institutions remain weak and insufficient to restore market confidence. In some cases, bank recapitalizations and restructurings need to be pursued, including through direct equity injections from the ESM into weak but viable banks…”
Posted by TrueEconomics at 2:48 PM

Correct me if I'm wrong. According to bondwatch, we have a yearly average of € 13,703,389,091 to pay until 2015 - I think this is all senior bondholder debt? Because I just read on the FT that now there are just €160m owed to senior bank debt holders. Can someone verify the correct figure please.