Sorry to break the bad news, folks, but the latest Residential Property Price Index (RPPI) for October is showing accelerating property prices declines on foot of already substantial rates of contraction registered during 2011 as a whole. the bust is getting bustier.

When it comes to Nama, relative to its cut-off date of November 30, 2009, property prices are now down 24.17%. When fully set up, Nama called bottoming out of the markets for Q1 2010. Since then, prices are down 20.62%, so those highly paid geniuses employed by Nama to 'value' properties and 'assess' markets are really shining stars. Recall that Nama paid an uplift of LTEV on assets purchased of an average 10%, plus carries a burden-sharing discount / cushion. Factoring these two into the equation, Nama-assessed properties are now held at a loss of 27.79% on their Nama valuations, even with burden sharing cushion 'savings' factored in. Taken across Nama book value, these (for now paper) losses can be assessed at ca €8.3bn. 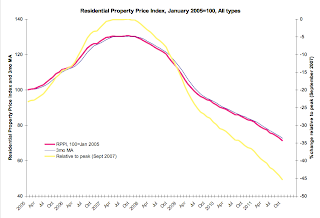 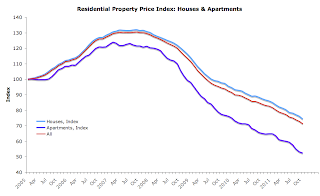 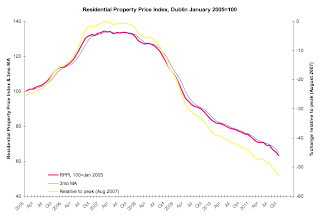 Chart above shows the price dynamics for Dublin properties. Dublin sub-index stands at 63.1 against September reading of 65.1, a mom decline of 3.07% - steepest since the catastrophic drop of 3.76% in August this year. 3mo MA is now at 64.9 and year on year prices in Dublin are down 17.52% - largest yearly decline since March 2010. Relative to peak, Dublin residential prices are down 53.09%.

Given the above, we can update projections for the core index and sub-indices for 2011 as a whole. These are shown below. 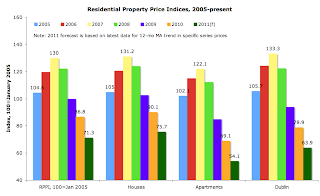 Depressing is the word that comes to mind. The picture is made even less palatable when we recall incessant blabber from our Government reps and stuff-brokers, as well as property 'experts' that inundated the earlier parts of the year with 'property prices will bottom out in H2 2011' noise.
Posted by TrueEconomics at 9:18 AM

The market is the market prices must fall to at least 1998 to 1999 prices so as to meet there true value.

Until we have a functioning banking sector these figures reflect mainly the shortage of cash buyers and the volume of distressed properties for sale.
Since we are unlikely to see any serious lending for a few more years, strapped sellers will keep pushing the market all the way down. Enjoy the horror trip.

At last people are beginning to see the real picture of just what ruin has been brought on the country. Pity the politicians are so blind and insulated from reality. 'Back in the bond markets by end 2012' - Where does our leader get his advice from?
We must start to understand the reality that when our sectoral debt is added to the sovereign here we are in a situation that we can never pay it all in full. Default is inevitable and the sooner we start to deal with this, the better. Being the pride of Europe is not serving us well.