Nouriel Roubini makes a very compelling argument as to the nature of the Euro area crisis - the nature revealed by unsustainable economic model based on running excessive external deficits and accumulating debt (see his blogpost here).

I have frequently referenced this problem to a deeper underlying force - the propensity of the European social democratic models to spend beyond their means. As the Euro area economies pursued populist agendas of 'social' services and subsidies expansion throughout the 1990s and 2000s, some (indeed majority) of the European economies stagnated, implying diminished capacity to sustain subsidies transfers within the vested interests-run Union. Thus, current account deficits - mask both Government and private sectors imbalances (with Governments in effect pumping the private economy with steroids of debt and cheap interest rates to extract tax rents that can be used to finance political largesse).

Chart below shows cumulated current account deficits for 12 years since 2000 as well as cumulated structural deficits. 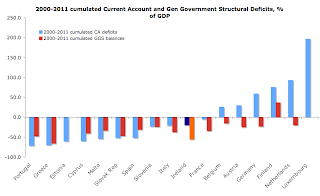 The striking feature of this chart is that over 12 years horizon, only 6 countries of the Euro area have managed to post a cumulative external surplus, while only one country (Finland) has managed to live within its means both in terms of external balance and fiscal balance. Any wonder that Finns are so opposed to the idea of 'burden sharing' that will see their surpluses transferred to the profligate states?

Another striking feature of the graph is that, contrary to Mr Roubini's assertion, France too was running dual external and fiscal deficits. Albeit, its deficit on current account side was small. Germany - another paragon of 'stability' run structural deficits on the fiscal side - i.e. spent beyond its means when it comes to Government expenditure outside that needed to correct for recessionary imbalances. Ditto for the Netherlands.

Ireland - our engine of 'exports-led growth' - is, alas, firmly NOT an engine of external balances. Cumulated current account deficit for the country is -19.5% of GDP. Any hopes for reversing 12 years of that experience, folks, will require re-wiring of our economy, preferences, political and institutional structures etc. Good luck getting there before the whole house of cards comes tumbling down.

In fact, deficits are sticky - hard to reverse. Past deficit experience, it turns out, shapes much of the future achievement, as illustrated in the chart below. 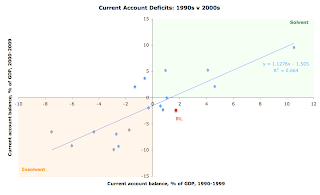 Once you are insolvent for a decade (1990s) you are likely to remain insolvent for the next decade too (2000s). And, hence, the headwinds against us (Ireland) reversing that and moving into strong surpluses on current account in years ahead are strong. Not that they can't be overcome. If we look at transition from 1990s external balance position to 2000s position, the following holds:
That means that, historically, a chance of reversing average current account deficit in the previous decade to a surplus in the next decade is 2/17 or less than 12%. not an impossible feat, but an unlikely one.

And current account deficits do appear to relate closely to the General Government deficits and Structural fiscal deficits as the two charts below show (note of caution - the equations estimated below are imprecise, of course, due to small sample). 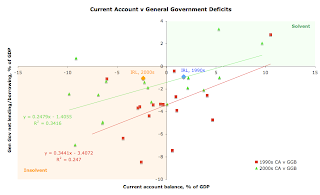 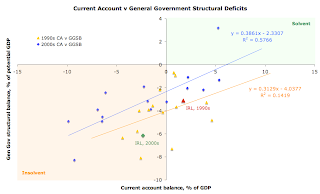 At last, a table to summarize: 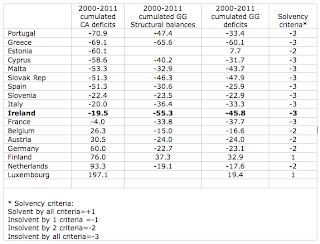 Yep, insolvency - of the deepest (across all three measures) variety is the domain of 10 out of 17 member states when it comes to the last 12 years of Euro area history. Another 5 member states are insolvent by two out of three criteria. Lastly, only two member states - Finland and Luxembourg - were actually fully solvent since 2000.

That, folks, makes for a rather spectacular failure of the Euro area institutional design.

Posted by TrueEconomics at 2:11 PM