NCB Services sector PMI data is out today and as in the case of Manufacturing earlier last week (see details here), we have an effectively flatline economic activity in the sector. Here are the details.

Overall business activity index reading improved marginally from 51.3 in September to 51.5 in October. 3mo average through october is now at 51.3 against the 3mo average through July 2011 of 51.5. Year-to-date 2011 reading is 51.9 and same period 2010 reading was 51.0 with same period 2009 reading of 39.7. In other words, all data falls within the range of statistically indistinguishable from 50. Chart below illustrates. 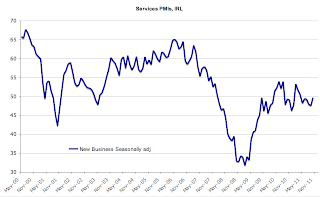 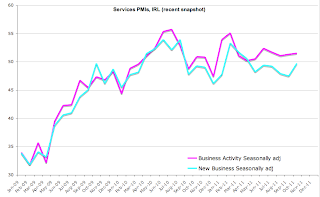 The snapshot chart below shows the shorter-range PMI for Services plus the core driving constituent of activity - New Business sub-index. Worryingly, the latter remained in contraction territory at 49.7 in October, for the 6th month in a row. Year-to-date average is at 49.5, again signaling contraction, and 3mo through october average is 48.4 against 3mo through July average of 48.9. So things are getting worse, not less worse on a smoothed trend. Year-to-date period in 2010 saw average New Business sub-index at 50.2. 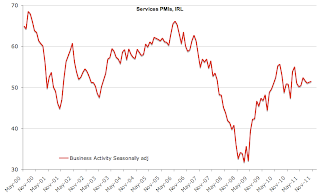 Profit margins (chart below) are moving in the wrong direction as well. Output prices sub-index remains at extremely rapidly falling 44 in October, same rate of contraction as in September. 3mo average is at 43.8 and year-to-date is 44.2. Last time output prices were expanding was in July 2008. Meanwhile, Input prices sub-index continues to signal inflation in intermediate and raw materials inputs at 52 in october on the back of 54 in September. Year-to-date average is 53.8 and 3mo through October average at 52.2 virtually identical to 52.4 average for 3 months through July. More on profit margins in a follow up post which will cover profits conditions in both manufacturing and services. 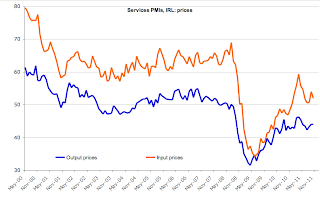 Profitability sub-index (as per above discussion), illustrated in chart below remains under water. However, Business Confidence Index posted another 'we don't want to face reality' expectation reading, showing robust expectations of economic expansion from services providers. The sub-index rose to a massively expansionary 63.4 in October from 59.5 in September and the longer term trends are consistent with this reading. Of course, I have shown previously that Business Confidence component of the PMI has virtually nothing to do with the real performance metrics as measured by PMIs - the new orders and employment sub-index. This conclusion was based on econometric analysis performed on the entire time series for the data and tested for lags and directional causality.

Worryingly, New Exports Orders sub-index moved from expansionary 53.1 reading in September to virtually stand-still at 50.1 in October. This compares unfavorably against the 53.0 average for year-to-date and even against 3mo average of 51.2 through October. The above, alongside with 3mo average of 52.4 in 3 months through July suggests downward trend in overall growth in exports-related services. 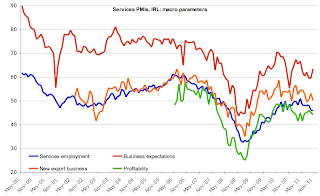 Lastly, employment in the sub-sector continued to contract. October reading of 46 was identical to September reading and signals significant contraction. The story is virtually identical to Manufacturing and will be subject of mored detailed discussion in the following post.

So on the net, there as flat-line performance across the sector in October, with majority of trends in sub-indices pointing to contraction in months ahead. Not good news, I am afraid, despite the 51.5 reading on overall PMI Services Business Activity index.

Posted by TrueEconomics at 1:24 PM