In the previous post I covered some interesting data on hotspot universities (high impact academic institutions) around the world based on OECD data for 2009. Here is the data on high impact patents (EPO top 1 percent) through 2005 against data for the same through 2000. 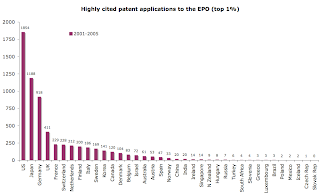 About the only interesting trend in the above data, other than the one that reinforces the trends highlighted in the previous post is that there is tremendous 'stickiness' or resilience or historical dependence in the data. In other words, there is a 0.994% positive correlation between past performance in terms of highly cited patents and the later performance. 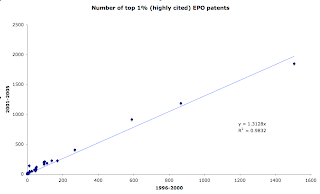 The above trend is of interest because it suggests that overall, league tables changes are difficult to achieve over the shorter period of time and also that ROI in academic research is itself relatively 'sticky', stretched over time.