For those of you who missed my yesterday's article in the Sunday Times, here it is in un-edited version.SUMMARY Note: updated below for estimated probabilities of default.

In their recent note, Fitch has singled out our massive public deficit and rising debt as the drivers for Irish sovereign bonds downgrade to a lowly AA- rating. This warning was in line with broader international markets concern about the mounting public debt liabilities around the world.

After days of falling prices on Chinese and Greek debts, this Tuesday it was Spain’s turn. October figures from Spain have revealed that the country deficit is now set reaching 9.5% of its GDP. The Spanish Government has gone out of its way to assure the markets that it plans to bring the deficit to 3% Euro zone limit by 2012. The plan involves raising VAT and capital gains tax. But the main measures will deal with public expenditure cut of 12-15%.

Spain, or course, is facing a public deficit that is some 3 percentage points shy of Ireland’s. But, unlike Ireland, Spain is planning to take its medicine in full and swiftly. Take another example. Denmark’s deficit is 7 percentage points below ours. In contrast to us, Danish government passed tax breaks and a major tax reform package encouraging more labour supply. The country also used its pension reserves to boost household income in this recession. To keep things under control – Danes cut public expenditure by up to 20% in some areas.

Latvia, Estonia, Iceland, and Hungary – all have implemented IMF-mandated cuts in public spending with some inflicting cuts up to 30% on public sector wages. All have seen subsequent rounds of upgrades from economic forecasters and bond markets.

But the signs are, after 27 months of severe crises, the Leinster House is still in the denial as to the full realities of our perilous fiscal position. Even after all the tough talk, Minister Lenihan is now appearing to accept Unions’ compromise for a temporary symbolically modest cut to public sector wages. Yet, the depth of our economic crisis requires nothing short of a drastic and permanent reductions in public spending.

Ireland’s promised €4bn cut in the Budget 2010 – contentious as it might seem to us – is pittance compared to what is needed to restore credibility in our economy.

Per latest set of accounts, we are in the need of raising almost a half of our current spending financing through borrowing. The latest forecasts from the EU Commission and the OECD state that Ireland's general government deficit is expected to be 12.2-12.5% of GDP in 2009 and 11.3-14.7% of GDP in 2010-2011. There is no snowball’s chance in hell that Ireland can reach the required 3% target by 2014 or, for that matter 2015, unless we deal with that share of the deficit that is known as structural deficit.

Any deficit arising in real life, therefore, can be decomposed into a cyclical deficit – that share of the deficit that arises due to a temporary recession – and structural deficit. The latter, of course, is the deficit that arises from structural overspending and cannot be expected to disappear when the economy reaches its long run growth potential.

Hence, the extent of our structural deficit is crucially dependent on the assumptions for the natural rate of growth in Irish GDP. So far this year, our Department of Finance forecasters have assumed that the natural rate of growth for Irish economy lies around the simple average for the 2000-2008 levels –close to 3.8% per annum. Their friends in the ESRI are slightly less optimism, predicting that the natural rate of growth is somewhere around 3% of GDP. All of this suggests that the structural component of our deficit is around 8-9% of GDP per annum or under €14bn. The cyclical component is in the region of 3-4% of GDP or up to €7bn. Hence, the current preferred adjustment path to fiscal solvency envisions cuts of €4bn in 2010 and 2011. Thereafter, reckon our mandarins, things will come back to ‘normal’ and Irish economy will miraculously churn out more tax revenue to cover the remaining hole.

But this bet assumes that Ireland is somehow an outsider to the entire Euro area club of smaller open economies. How else can our potential GDP growth be almost 300% above that of Denmark, 250% greater than Belgium’s, 60% above that for the Netherlands and for the Euro area as a whole? Or why should we assume that Irish economy will overshoot potential growth rate in the first year of recovery, when the majority of European economies are expected to reach theirs some 3-5 years after the end of a recession?

If our potential GDP growth is really in line with the small Euro area countries’ average, then our output gap (the difference between the potential and current GDP) is closer to 6% rather than 7.25% that the Department of Finance builds into its forecasts. This in turn implies that our cyclical deficit is around 2.5%, yielding a structural deficit of ca 9.5-10% of our GDP or €16-17bn in 2009 terms.

To get close to a realistically feasible path to solvency, Brian Lenihan should be aiming to cut some €8bn in public deficit in 2010 alone, followed by €3-4bn cuts in 2011 and 2012 each.

This is the real legacy of excessive exuberance with which Bertie Ahearn handed out cash to various Social Partners constituencies. And it is now manifested in purely toxic extent of deficits that cannot be corrected by any means other than savage cuts. The structure of our expenditure – manifested by the fact that some two thirds of it goes to finance wages, pension and social welfare payments – implies that the cuts must happen in exactly these areas.

Painful as this may be, there is simply no alternative. No productivity increases in the public sector will help deflate the actual costs of the sector. The costs that keep on rising. Per CSO’s latest data, 2009 was a bumper crop year for our servants of the state. Average public sector earnings are up 3.2% in a year to the end of Q2 2009, while average private sector wages are down 6.8% over the same time - a swing of 10 percentage points. Survivorship bias – the fact that earnings figures do not reflect the jobs losses and do not net out resulting redundancy payments in the private sector – suggests that the actual earnings growth differential is much wider than that.

Restoration of our economic health at this junction requires swift and significant cut – of the magnitude of 15-20% - in the total pay bill of the public sector. This can only be achieved through a combination of reduced employment and earnings cuts. It should be accompanied by a 10% cut in social welfare and a 30-40% cut in capital spending.

This is an urgent task that cannot be delayed for future Governments to tackle. Since May this year the Government has gone on a PR offensive arguing that the markets have treated Budgets 2009 as serious efforts to correct deficit.

Most of this is political sloganeering. As the chart clearly shows, although markets estimates of our probability of default on sovereign debt have declined in time from a historic peak in February 2009, this decline was far less significant than the overall market gains experienced by other countries with similar budgetary problems. Having peaked well ahead of all other Euro zone countries, Irish CDS spreads have stayed persistently at the top of the common currency area distribution. And there they remain with a significant risk to the upside. 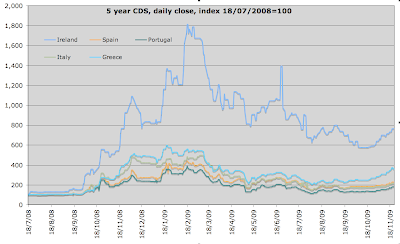 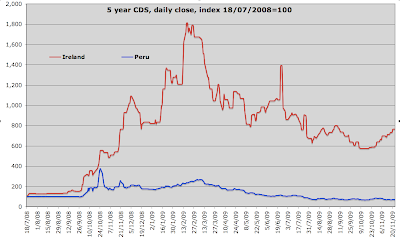 And here is an interesting chart for actual CDSs 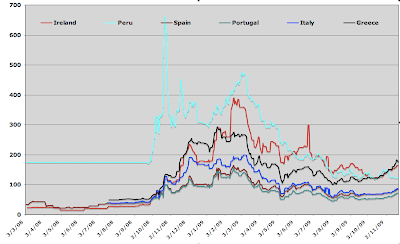 The markets are now putting estimated probability of our default above that of Peru!

To put these into perspective, using OECD and EU Commission latest forecasts, taking €8bn in deficit financing out this year will save Irish taxpayers some €3-5bn in interest payments alone over the next 5 years.

The costs of our inaction are mounting.

Here are two charts on estimated probabilities of sovereign default for various CDSs, using a linear formula (not a more accurate PV of contingent claim =PV of fixed payment approach and no bootstrapping). 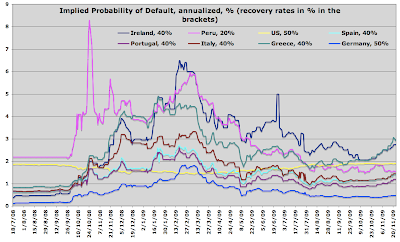 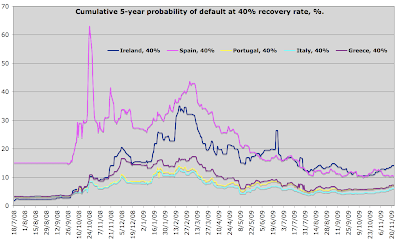 The above chart shows the cumulative probability of default over 5 year term of life of bonds... we are back in double digits and above Spain and Greece...

Posted by TrueEconomics at 8:08 PM