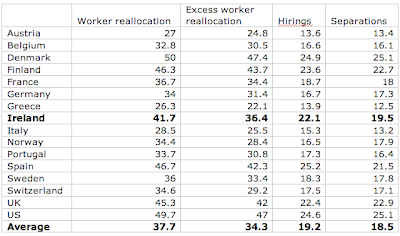 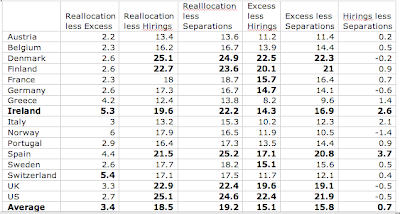 Another table above shows that in terms of differences between reallocations and excess layoffs, hirings and separations, Ireland is sports a difference from the average only in terms of reallocations net of excess, or that component of the probability of changing work status or employer that is not accounted by movements of jobs within the same sector. In this area we have a higher rate than average, most likely reflective of former ICT sector workers being shifted to new sectors in the wake of the Tech Bubble collapse. Another area of difference relates to hirings in excess of separations, which implies that Irish economy was net additive of new jobs at the time at a strong rate. All other parameter readings are average.

So for a pictorial representation next. Higher worker reallocation rates – similar to other growth economies of Denmark, Finland, Spain, UK and US. Similarly higher excess worker reallocation. Slightly above average hirings rates and average separations. 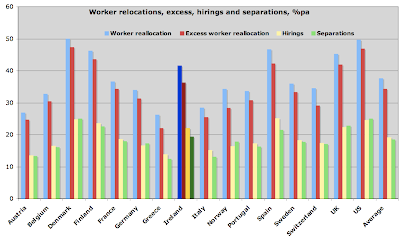 And as far as differentials go: 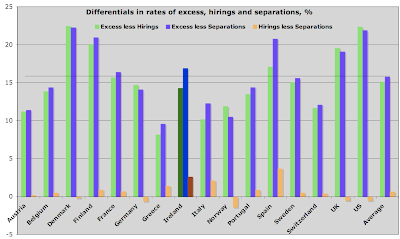 So what about ‘gender issues’ in the workforce? Surely here we have lots of ground to gain as our Irish Times pundits on economy have been busy shouting about various gender gaps and glass ceilings? 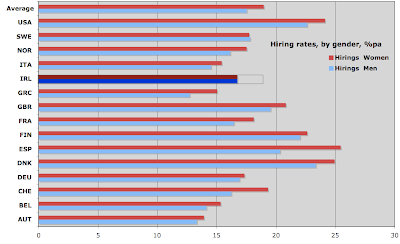 Well, as far as hiring rates by gender go, we are below average for both men and women, and remarkably, there is no difference evident by gender whatsoever. The only other country with such levels of hiring ‘glass ceilings’ is… Sweden. That said, our overall mobility due to hiring was a bit weaker than the average. But not by much. 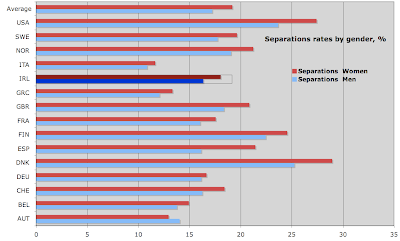 Yes, rates of separation from employer for women were in excess of those for men in Ireland, but both rates were below the group average and the differences across gender lines were less pronounced in Ireland than in… Sweden, Norway, Finland, Denmark, and Switzerland. Either these countries are even more sharkish capitalist economies or there is no evidence of Ireland’s labour markets being much tougher for women then for men. 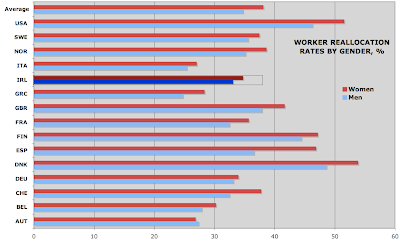 Chart above shows that in terms of gender imbalances in reallocation rates by gender, Ireland was in the below-average tier of the sample countries. And that mobility gap between men and women was smaller than the one found in many other social(ist) democracies of our Europa Land. Average we were in this category as well.

If there was no real need for a radical Government intervention to protect Irish women from sharp labour market practices of employers, what about the famous age gap? May be here there we find a smoking gun? 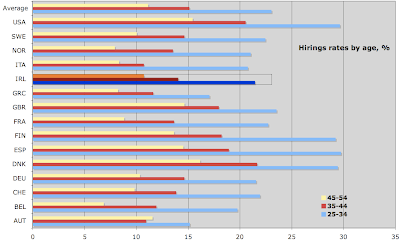 Not really. All age groups in Ireland saw similarly below average rates of mobility due to hirings. And overall age gap was similar as that of the average economy. Nothing dramatic happened here, folks. 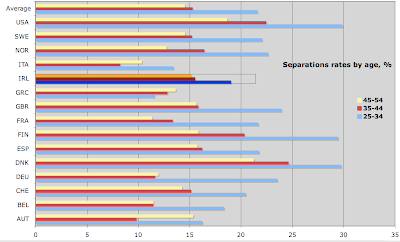 Nor were our separation rates by age category drama-filled either. Below average – reflective of tighter labour markets in general and employers’ desire to hold on to workers in the age of rising wage inflation. Only the older cohort of workers experienced more jobs turnovers than average, and then not by much. For a much younger society than our peers this suggests that there was hardly a difference by age in separations after all. 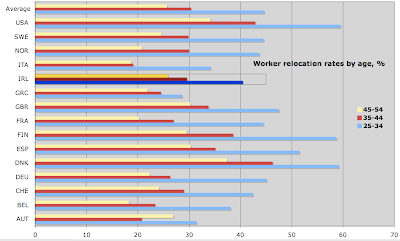 Now, we’ve all heard about our marvelously educated labour force. With so much education, would Irish economy treat various education cohorts differently in the labour market? Afterall, a handful of less educated workers would really stand out in the sea of excellence that is Ireland Inc’s workforce. 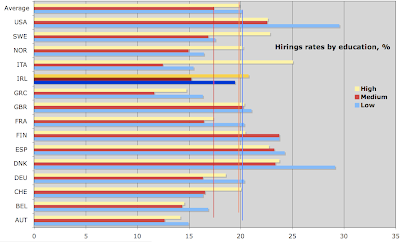 Alas, the rates of hirings were below average in Ireland for all education groups, ecept highly educated. Now, here is a strange thing – if we had a highly educated labour force then, this would imply diminishing demand for such oversupplied ‘commodity’. In turn, demand rocketed. Either we all were working for high-education-intensive companies (MIT Media Labs?) or our ‘high’ levels of education were just average in quality/quantity… 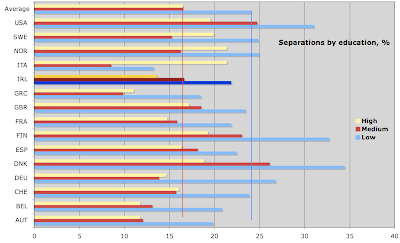 Separations tell the same story – these are movements of workers out of jobs and they are… below average for highly educated and average for medium educated and low for low educated. People seemed to have been relatively happy to hold their jobs.

And so on to reallocations rates: 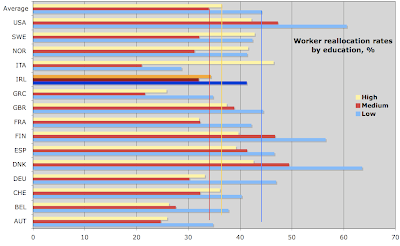 Below average for all…

And so, positing a question: in 2000-2003, were Irish labour markets closer to Boston or to Berlin? The answer, alas would be a disappointing neither. We were, in fact, closer to that inextant Kingdom of Average. Time to stop class warfare?

Posted by TrueEconomics at 9:37 AM

The data is an interesting window on the labour markets in different countries, eg: the Hirings and Seperation data.

However, I think we need to be careful drawing conclusions as to the performance of a certain countries labour market, as there are cultural and structural differences in each, so it is very much apples to oranges.

Ireland may be seen to be average in Hirings at 22.1 and Seperations at 19.5, but the average is boosted by the US, which is not very "friendly" to its workers.

There are clearly cultural differences in Germany for example where Seperations were 17.3 compared with the US figure of 25.1. Ireland's figures are very close to the UK.

What surprised me is how low Greece was, as peple tended to stay in their current jobs. Also Denmark, which is clearly closer to Boston than Berlin on this metric, as well as France. Ireland being average is good.

Overall, the general rule of thumb applies that about 20% of an employers workforce will leave each year in a reasonably operating labour market and economy.

ps: I have not been able to read all your recent posts as you have been very prolific, and I am wondering if you are publisging too much data for readers to assimilate and absorb!