So Exchequer returns for October are in. As usual, charts illustrate: 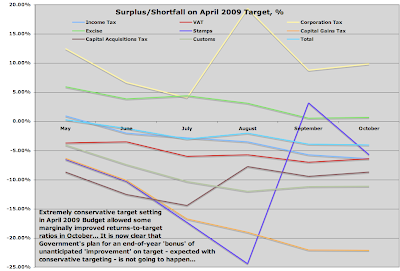 The miracle of 'stabilising revenues' first. Per above chart, stabilisation, across some categories, has been achieved simply by choosing an unrealistically conservative target for October revenue. The reasons for this conservatism are a matter of guess, but:
The Grand Plan backfired: 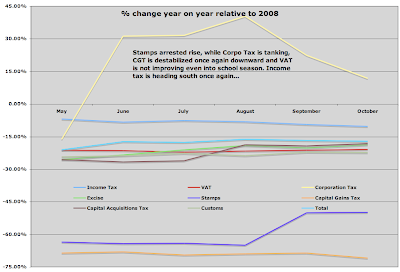 As charts above highlights, tax heads are performing worse and worse relative to 2008 across the board. Worryingly - Corpo taxes and Income taxes are tanking once again and this is before self-assessed tax forms poured in. 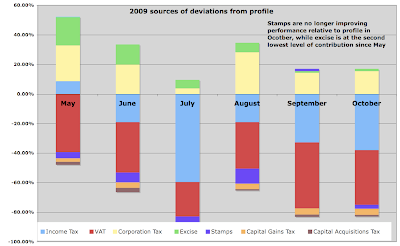 Hence, measured in terms of their respective contributions to meeting the tax profile set out in April 2009 Budget, we are now down to just two tax heads with net positive contribution - Corpo (which will see its positive effect eroded as timing changes imply that Corporation Returns are now all but exhausted for the rest of this year) and a tiny positive contribution from Excise that is about to turn negative. In short, it looks like by November all tax heads will be underperforming targets - which will be a real feat of forecasting, then. 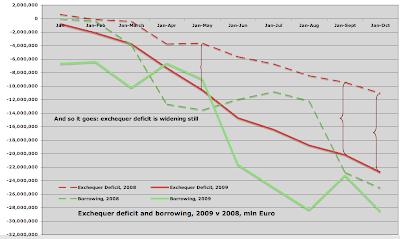 Subsequently, no one should be surprised by the fact that Exchequer deficit is widening on 2008 figure. Borrowing is once again diverging beyond 2008 levels (chart above). And the gap between total receipts and total expenditure is widening (chart below) 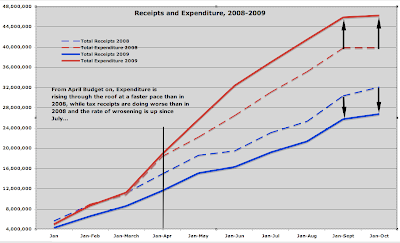 Couple more charts: one below showing just how conservative was October target and how this has led to the so-called 'improvement' in on-target performance. 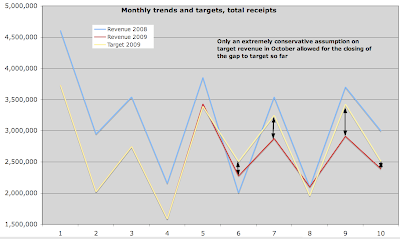 And the following chart shows that the data does not support an assertion that April Budget was successful in arresting or stabilising the expansion of our deficit: 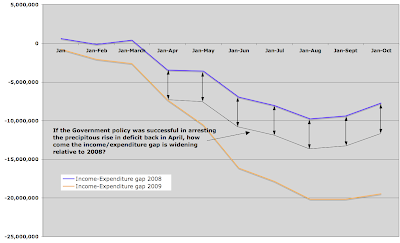 So much, then, for all the brave proclamations about 'making necessary adjustments' and 'taking the right medicine'...
Posted by TrueEconomics at 9:30 PM

Yes. One keeps reading about the 'tough decisions' that the Irish government has taken. What are these other than tax increases? Not tough for the government at all. More stupid than tough and, given the collapse in revenue, not working either. The fact that the government is still talking to ICTU is very telling.

now would be a good time to overhaul out tax system, e.g. vehicle registration tax. This is a Protectionist tax, given that car sales have fallen through the floor, na most new cars are being purchased in the North, with resulting losses to the state