If you missed my today's article in Sunday Times, here is the unedited version below.

Before that, a quick news flash - my source close to DETE has informed me last week that in September-October this year three large multinational companies currently not present in Ireland have told our international investment development agency that they have no interest in locating in Ireland. These statements came after several months of negotiations to attract these companies into Ireland. Significantly, all three indicated that the upper marginal tax rate in Ireland, which inclusive of levies and charges rises to a whooping 56% of individual income was the main reason for them not to locate their European headquarters here, as they deemed this level of tax on executives' earnings to be prohibitive.

As Ireland is facing the prospect of one of its toughest Budgets in history, the debate about what to cut and by how much has firmly displaced all other issues on the news agenda. Different views, arguments and policy proposals abound. Virtually all side one way or the other with the idea that any reduction in public spending will be deflationary in this economic environment. Cut public deficit financing, say proponents of tax-and-spend or borrow-and-spend policies, and you will be cutting consumption, triggering a decline in GDP, and more layoffs.

This argument is not new. Many economists, let alone policy pundits, subscribe to it. But is it really true? If the Irish Government were to reduce public consumption or state wage bill today, will the Irish economy crash?

The debate centres on the question as to how large is the fiscal policy multiplier. To understand it, suppose that the fiscal multiplier is greater than 1, say 1.5. In this case, a €1.00 increase in government purchases raises the aggregate demand for goods and services in the economy by more than one euro, or in example above, by €1.50. If the original euro was borrowed at 5% per annum, then the net return to the economy is 42.9%. Sounds magical? If this indeed were true, economic prosperity for all can be achieved by simply endlessly running ever-rising deficits to finance more and more public spending. Enter SIPTU/ICTU/CPSU programmes for State spending. Clearly something is amiss in this logic.

Well, even in the case of the US – the most thoroughly researched economy in the world - there is confusion as to what exactly deficit financing of public expenditure does in a recession.

In a recent research note Professor Christina Romer, Chair of President Obama’s Council of Economic Advisers, asserted for each $1 spent by the Federal Government in a recession, US economy grows by $1.95. So far so good – borrowing at, say 5% per annum and getting 51.3% return makes sense. So much so, that her own employer – the said Council of Economic Advisers – thought this paper was a grand candidate for publicly justifying President Obama’s stimulus package.

The problem, of course, was that Professor Romer’s estimates did not fully for the fact that the largest part of President Obama’s stimulus came in the form of tax cuts, not spending increases. The former accounted for roughly $66bn of the total spending of $151.4bn in March-August 2009, while conventional public spending accounting for just $30.6bn. The rest of stimulus was taken up by aid to the states ($38.4bn) much of which went to offset earlier local tax increases and Government investment ($16.5bn).

In response to Professor Romer, Professor Robert Barro of Harvard University argued in January 2009 that historically, US fiscal multiplier was very close to 1, suggesting that deficit-financed spending earns no real economic return. And Barro’s findings are echoed by an earlier study by Roberto Perotti of Bocconi University, Italy. Perotti looked at fiscal multipliers for the OECD countries between 1960 and 2001. His main conclusions were that post-1980 there is no evidence of fiscal multipliers being in excess of 1. Over time, with a 5% coupon on a 10-year Government bond, deficit financing for Ireland Inc today, under Perotti’s findings will end up costing our economy at least 62 cents on each euro spent net of any benefits we might receive from growth. Furthermore, Perotti found evidence that government spending stimuli hurt private consumption and investment, whereas tax cuts do not. This suggests that cutting taxes, although not necessarily more productive than a fiscal stimulus in the short run will at the very least be less costly to the economy in the longer term.

So dynamic effects of deficit-financed fiscal stimulus over time do matter. And here lies the crux of our debate: dynamic effects depend on country characteristics. Majority of studies on the matter of fiscal multipliers were carried in the US – a country that hardly resembles Ireland for several reasons. Firstly, it is a large and a relatively closed economy. Secondly, it has independent monetary policy, prints its own currency and has a global market for its bonds. Ireland, in contrast, is a small open economy, with no monetary policy independence, extremely tight and saturated markets for its bonds and with exchange rates that are flexible vis-à-vis its main trading and investment partners (the US, UK and the rest of the non-euro world).

And this brings us to the last point of our tour de force through the world of fiscal multipliers and deficit-financed state spending programmes. To make the most accurate assessment of the potential effects of the public sector cuts proposed for the Budget, we must consider empirical evidence for countries similar to Ireland. A recent (October 2009) study published by the Centre for Economic Policy Research looked at 45 countries (20 high-income and 25 developing), spanning 1960 through 2007. What the authors found confirms the results attained by Romer and Perotti, and paints a picture of just how dangerous the deficit financing myth can be for a country such as Ireland.

For a small open economy, like Ireland, the study found cumulative total fiscal multiplier starts with a negative (yes, a negative) -0.05 effect on economic growth and in the long run (over 6 years) reaches a negative -0.07. In no time does the average cumulative multiplier exceed 0.4%. Now, add to this a realisation that Irish economy operates in the world where the Euro is in a virtual free-float against the Pound Sterling and the US Dollar. The same study estimates that for economies with flexible exchange rates, the impact effect of fiscal stimulus is -0.04 and the cumulative long-run effect is -0.31.

This means that were we to pursue a policy of higher fiscal spending based on deficit financing, as the Men of the Liberty Hall suggest, we would be facing immediate losses of at least between 4-5 cents on each euro of the entire stimulus. Over time – say by around 2013-2015, these losses will accumulate to something in the neighbourhood of 31-40 cents on the euro per annum. And this is before the cost of financing these deficits is factored in.

Even were ICTU/SIPTU were right on our ability to raise funding without any cost to the real economy (although their proposals would imply severe tax hikes for ordinary men and women of this country), Irish economy would still be wasting money if transferring wealth from the so-called rich (aka pretty much everyone with a decent job) to public expenditure.

Love it or hate it, but real world economics simply has no room for our Social Partners’ latest ideas on fiscal management. 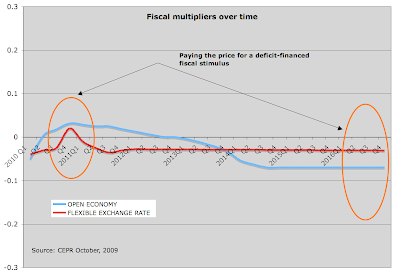 At a recent conference, a French colleague asked me if Ireland is a low tax and low public spending economy.

Focus on 2009 numbers. Due to continued increases in public spending throughout
this year, and to a rapid decline in our GNP, Irish Government spending is likely to account for between 53% and 54% of our domestic economy. In other words, over half of all goods and services supplied in Ireland is being swallowed by the State.

To put this number into perspective, the heaviest taxed economy in Europe in 2008 was Sweden, where the ratio of public spending to domestic economy was just over 53%. Yet, navigating through the recession, Swedes cut their taxes in 2009 as we raised our. Thus, by December 31 this, Ireland will be the holder of the dubious title of the heaviest taxed economy in the EU.

All of this means that Ireland is heading for a grim Christmas sales season shackled not by low consumer confidence, but by a lack of after-tax disposable income.

Posted by TrueEconomics at 2:22 PM

So basically you are saying that stimulus wont work in Ireland. However, are you worried about the effect the proposed cuts will have in terms of deflation, increased unemployment etc?

Not exactly, this does show that stimulus will not work in Ireland, true, but it also shows that any deficit financing scheme will not work in Ireland. Our public spending today is deficit financing. In other words, you have to look at the current levels of spending by the State as if they represent a stimulus. You can also directly price the true economic cost of the current deficit financing - which is a net cost to the economy at the moment of issuance of new debt and will continue to be the cost to this economy through its entire life. Alternatively, you can think of deficit financing of the ongoing spending as an opportunity cost. Private consumption multiplier is in excess of velocity of money, or at least x2 to x3. Public spending multiplier is significantly less than 1 in most of the economies in the short run, while for an economy like Ireland it is negative. Every euro spent by the state today that is deficit-financed, therefore, represents a massive loss to this economy as it:
(1) generates direct loss through a negative fiscal multiplier, and
(2) generates a negative effect on private consumption.

Bank of Ireland said today they would not need new capital post NAMA-
contrary to your analysis that they will need two billion euro.

One last point Constantin, I see Brian Lenihan is going after David
Drumm- notice the "timing" he picked. I wonder is it to distract the
public's anger and fury over Lenihan's surrender to the appointment of
Colm Doherty at AIB
but where the hell is Sean Fitzpatrick.