Eurocoin - a leading barometer of future economic activity in the Eurozone - increased to 0.55 in November, the third positive reading in a row up from 0.33 in October. The reading points to an underlying growth in the Euro area of slightly above 2% on a annual basis. Gains have been led by consumer and business confidence as the main drivers, the stock market and industrial production contributed to a lesser extent. We are now back to H2 2007 level in Eurocoin reading.

So here is the forecast, as promised: 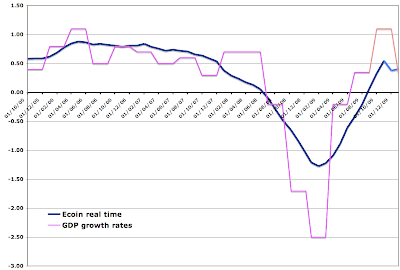 Notice that my forecast assumes ca 1.1% growth q-o-q in Q4 2009 and a dip to ca 0.3-0.4% in January 2010. Not a W, but a moderation nonetheless, driven primarily by what I believe will be a very weak Christmas season across Europe. In Ireland, as always there is an issue of extreme volatility in growth, but I will be watching Christmas sales for signs of serious weakness - there is a distinct possibility of large shut downs on retail and restaurants trade side the other side of holidays into January. Let's hope I am wrong (and I have been wrong in the past - my previous forecast for Q3 2009 Euro area growth was -0.5-1% and it came out at a 0.8 percentage points swing from my closer end of the estimate).

On a less economic side of news:

EU Commissioner for Internal markets for the next 5 years will be one French MEP Michel Barnier. Barnier will take portfolio with responsibilities for financial services. Barnier had so far distinguished himself as trade protectionist with strong opposition to the so-called 'Anglo-Saxon' model of economic development. That is to say he is firmly in favor of rules-based regulation of financial services. This is a net negative development, as currently Brussels is in the process of drafting a massive volume of regulations relating to financial services and such a process of reform requires a very balanced and sector-specific approach. Barnier is hardly fulfilling such a description. On July 28 this year, Le Monde (Barnier's home paper) described the possible appointment of Barnier to the Internal Markets portfolio as equivalent to "entrusting the surveillance of a chicken coop to a fox".

Why a chicken coop & fox analogy? Not because Le Monde is that much concerned over Barnier's credentials as over-regulation driven finance tsar, but because Barnier will be running financial sector across the EU at the time when President Sarkozy has a clearly defined (and publicly expressed) objective to make Paris a bigger financial services centre than London. It will be interesting to see how the battle between Barnier-the-European-Federalist and Barnier-the-French-Politico will be unfolding.

Forbes reports (here): "One former official who worked with Barnier said: 'He has always been very close to the French conservatives. He was close to Chirac and now he is close to Sarkozy. He will know that he is in that position thanks to Sarkozy.'"

If there is any more to add here it is that Barnier was Minister for Agriculture in France between 2007 and 2009 - a post that saw him preside over the most subsidised, most protected and least 'common market' of all sectors in Europe in a country that holds second place only to Ireland in per-farmer subsidies. He now will oversee the most mobile and least protected sector across the EU. Spot the irony...


And since we are on news digest - here is the story that caught my eye. This goes to heart of the debate as to what makes a state a pariah state. After all, Soviet Union used in place its Nobel Prize winners into exile or under house arrest in a remote city closed-off to the rest of the world, it even forced one to turn down his Nobel Prize, but stealing it away from a person? New low for the state that the West is courting with bouts of friendly rhetoric. And what an irony for the Nobel Peace Prize Committee, which awarded President Obama's prize this year in part for his renewing dialogues with rogue states like... Iran (here)...

Posted by TrueEconomics at 8:43 AM