Table shows outflows of Irish-owned investment from Ireland to foreign destinations (negative values) and the share of each destination in total outflows. Note the significant jump in outflows to the offshore centres, which has risen between 2006 and 2007. It will be interesting to see if this trend – moderated in 2008 – resumes in 2009 in the wake of significant increase in taxation burden in Ireland. Per more detailed breakdown in CSO data, the offshore centres received only a modest share of Irish capital in the form of reinvested earnings, and virtually none in equity purchases, suggesting that most of the outflow to these destinations was in form of business investment and cash. 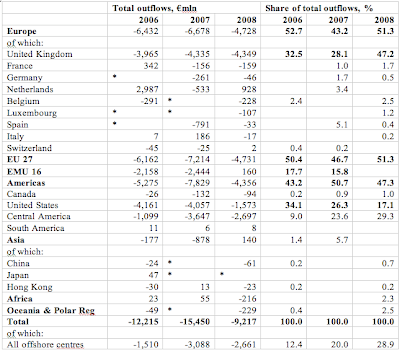 Another interesting feature of this data is that significant outflows continued to the UK in 2008. Margin calls? These related to equity purchases and reinvested dividends and a significant uptick in ‘other capital’ outflows (margin calls covers on buy-to-let and other risky investments covers?).

Over the same period of time, outflow of investments to the US has fallen off the cliff in 2008. Equity purchases in the US peaked in 2007 at almost 5 times the levels of 2006 and then collapsed to a quarter of 2007 levels in 2008. Someone was buying into the top of the bubble in the US stock markets… Meanwhile, reinvested dividends remained relatively stable. Other types of capital have fallen off the cliff from almost €3 billion in 2006 to €746mln in 2007 to €77mln in 2008. Given that the US property prices peaked in 2006, this also suggests that we were buying at the top of the market there. 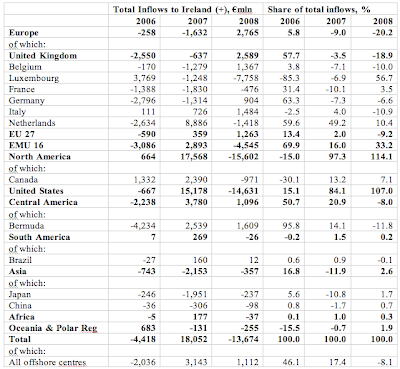 Table above shows inward investment inflows to Ireland. Negative values imply that foreign investors took out net amount of capital from Ireland. Offshore centres sent in about as much as 40% of the inflows from entire European area. Any alarms ringing at the Financial Regulator’s office? Notice dramatic swing from net inflows to net outflow vis-à-vis Lux and the Netherlands in 2007-2008? Equity and other capital outflows dominated here. Tax optimization in action, especially on capital taxes side.

Amazing figures from the US. Between 2007-2008, a surplus of inward inflows of €15.2bn swings into a deficit of net outflows of €14.6bn – a spread of €29.8bn or 17.4% of 2009 GDP! Interestingly, equity and reinvested earnings were still in net positive in 2008, and going strong, so the massive net outflows were the result of something else. Capital flight? Deposits crunch? Losses taking?

The totals suggest that Ireland has bled a massive €36.8bn worth of investments (equivalent to 21.5% of our 2009 GDP) out of the country in 2006-2008 alone. This hardly accounts for the full extent of deterioration in the capital values of the remaining investments by foreigners in Ireland and Irish own investments abroad. But even without taking into account our current crisis, at the peak of our markets valuations in 2006-2007, we were hardly generating much real growth out of our own and foreign investments into the country. Wonder why? Me too.
Posted by TrueEconomics at 11:56 AM