CSO is not the quickest of institutions when it comes to timely release of data, so when it comes to Institutional Accounts, all we have to go for now is 2008 end of year data released earlier this week. Here is my take on it. 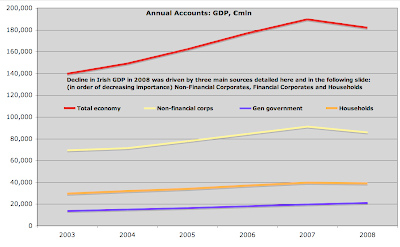 Chart above shows broad GDP composition. The decline in GDP in 2008 is pronounced and it is relatively clear that Non-Financial Corporations lead the way in driving down our gross domestic product. To see this in more details, consider the decomposition below: 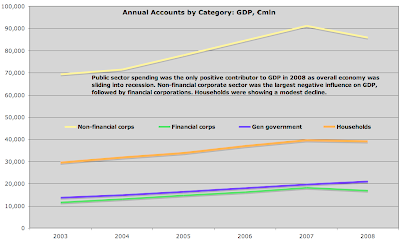 Absent real growth in private sectors, public sector becomes more pronounced. In other words, as overall economy decline, public spending picks up in relative terms. Everything else is tanking. Not surprising, really. But in percentage terms, this is throwing some additional insights (below): 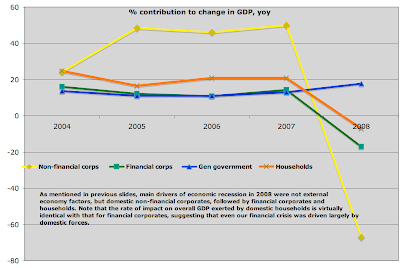 Now, the story of our economic downturn is very much in full view - productive part of domestic economy (non-financial corporations and households and financial sector) is in deep retreat. Non-productive public deficit financing of state consumption is swinging into positive. Also, note that household contribution fall off is pretty much in line with financial sector fall off. This is indicative of the fact that (as I have argued consistently before) our financial crisis was not caused by external forces of credit crunch, but by internal mountains of bad debts accumulated by corporates and households.

Another point from above is just how dire are the conditions in non-financial corporate sector. Only a fool would believe that this precipitous collapse in the relative share of GDP accruing to non-financial companies in Ireland can be repaired by injection of more debt into the system. 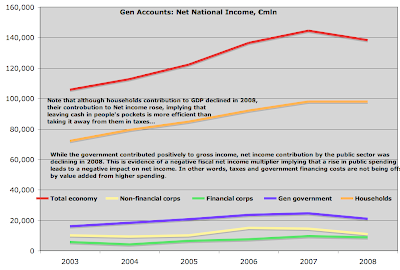 Chart above shows that Net National Income (NNI=GNI-depreciation, GNI=GDP+net receipts from abroad of wages and salaries and of property income), which by its definition nets out along with depreciation some of the effects of transfer pricing has fared pretty much in line with GDP. Interestingly, households contribution to NNI is in excess of their contribution to GNP, suggesting lower depreciation and potentially rising inflows of income from abroad when it comes to Irish households. It also reflects the outflow of foreign workers (either out of Ireland or onto unemployment benefits), reducing income outflow out of the country. General Government line shows clearly that net income multiplier of government spending is negative - which is logical when you consider the fact that the Government borrows from abroad to finance current spending at home. 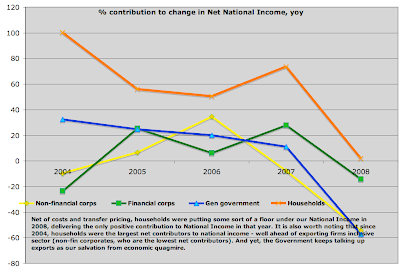 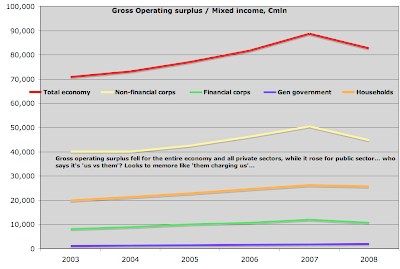 Gross operating surplus in the economy fell in 2008 across all private sectors and rose for Government sector. Why? Because while talking about the need to correct deficit, to cut spending and to take tough measures necessary to rebuild exchequer finances, our leaders were all too keen to actually pre-borrow as much as possible before 2009 hit. 'Do as I say, not as I do' is the motto... 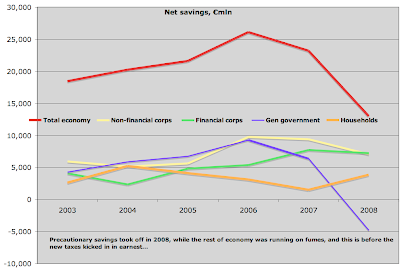 And thus net savings collapsed for Irish Exchequer as net borrowing soared. In contrast, households - scared first by rising joblessness and tanking stock markets and collapsed house prices, then by Leni's VAT measures and Government's inability to act - have moved early on into precautionary savings. Good for them - Irish non-financial corporations, in contrast decided to cut their savings - a sign of debt overhang in a recession. This means that overall, Irish corporations will emerge from this crisis with no spare cash to sustain restart of capital investment. This might be a good thing, given that over the last 10 years, most of Irish corporate 'investment' involved buying up competitors' firms at peak market valuations in a hope that if you make your company bigger, it will grow faster.

External balance has improved, but underlying it, trade flows to and from Ireland have come under pressure: 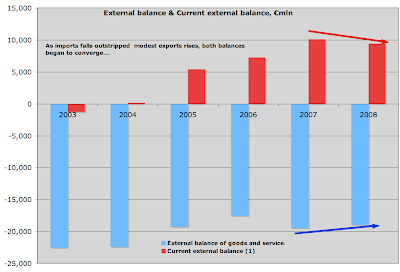 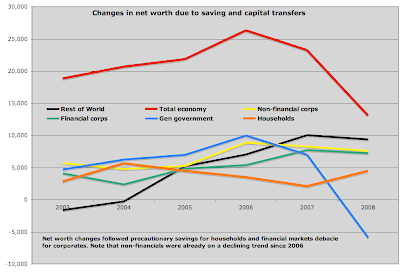 To nobody's surprise, net worth fell off the cliff in 2008 for the entire economy, although household savings allowed for a rise in their net worth position. 2008 marked the first year in modern history when Irish households net worth exceeded that of the Irish Government. Just think about it: the state dependent on taxpayers has had higher net worth than those who financed it... Spot anything here? How about 'fairness' idea our political leaders love waving around. 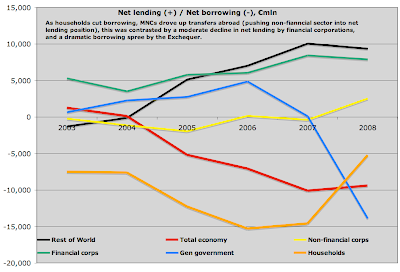 Net lending positions (above) are also self-explanatory. But here is an interesting angle on CSO's data: 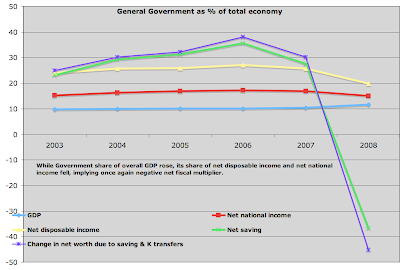