There are many claims flying about our bearded men of Siptu and Ictu nowadays. None are more offensive than their claims that private sector has not been hit hard in terms of wages and earnings by the current crisis. Well, thanks to CSO's inability to collect timely and frequent data, we had to sit back for some time, tolerating these unionist claims. Alas, data for Q2 2009 is starting to show that those of us who said that private sector is suffering earnings declines while public sector is basking in the sunshine of rising earnings were right. Here are the numbers:
Table 1 reports actual average weekly earnings based on CSO data sets. Yep, that's right -public servants make more money than the average managerial, professional and clerical grade in every other sector except financial services and insurance. Note, I separated electricity, water supply and waste management sector into quasi-public sector because it is heavily dominated by massively inflated earnings in ESB and other state monopolies. 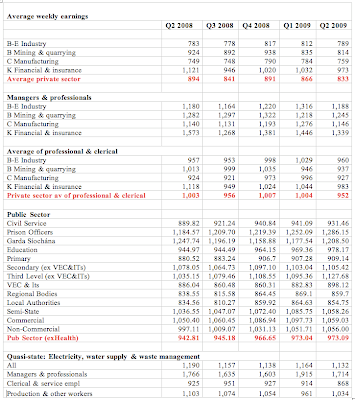 Next, consider average weekly earnings for professional and clerical grades and for public sector overall. The reason for this is that our unionists keep on droning that public sector workers are so superior to the average worker in the rest of economy that they must be compared with higher grades. Forgive my disbelief that, say, CIE's bus drivers are so productive and so highly skilled that they should be benchmarked against branch managers of Irish banks, but let us indulge the Siptu/Ictu crowd: 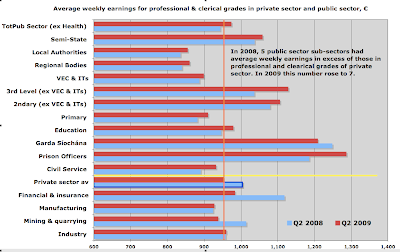 Yes, it says that: between Q2 2008 and Q2 2009 more categories of public sector workers started to earn in excess of private sector average earnings for managers, professionals and clerical workers. And this is at the time when Jack O'Connor and the rest of Unions' leaders are talking about rising tide of income inequality (oh, give me a sec and I will get back to that concept). 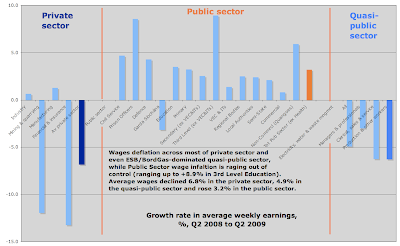 Now, chart above shows that wages have been rising across all (but one) public sector sub-sectors. Average public sector earnings are up 3.2% in a year to the end of Q2 2009, while average private sector wages are down 6.8% over the same time - a swing of 10 percentage points. Happy times for CPSU and the rest of the unions pack.
Of course, years ago, when we had fast growing private sector wages, the unions, CORI, the rest of the social pillar fringe were loudly bemoaning the rising tide of income inequality. So what can we say now? Check out the following table: 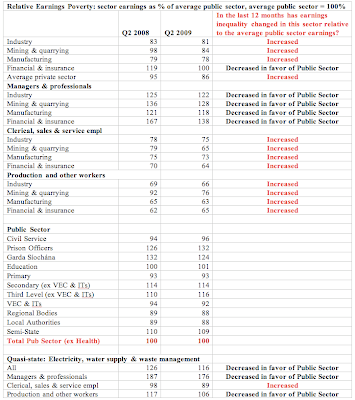 Yeps, that's right, applying Socialists' faulty economic logic, last year our Trade Unions' policies have led to a rise in income inequality between private and public sector in favor of higher income to public sector.
If anything, the latest CSO data suggests that the next month's Budget 2010 should open with a significant across the board cut in public sector wages by at least 10% (to simply undo income inequality that has been generated since 2008), and only then proceed to all other cuts. Have a pre-Budget Addendum on Public Sector Earnings Inequality first, before you cut education, health and even social welfare, Minister.
Posted by TrueEconomics at 1:24 PM

The only problem with this analysis is that it only includes the highest paid industries in the private sector (industry, mining, fin services & mangement). Where are the retail workers, hotels and resturants,cleaners, childcare, etc. 1000 euro a week is a joke, and makes the public sector look reasonable.

Gerard, absolutely correct! CSO, of course, does not care to publish the full data on earnings. As it is, the article is based on two separate CSO reports, each produced at different times. What is telling is that average wages in the public sector are so out of line with reality that, given that the top 5% of our workforce earn above 67,000 euro pa, one must wonder, just what is the proportion of these earners comes from the public sector?

Any chance you could link readable versions of those charts?

Can you put up readable images ?

Ronan, sorry - just realised that for some reason images are not opening in the browser. Will update and refresh. Many thanks for pointing this out.