"For the first time in a year, a majority of respondents—51 percent—say economic conditions
in their countries are better now than they were in September 2008.... [but] only 19 percent say an upturn has begun. This figure rises to a remarkable 33 percent, however, among respondents in Asia’s developed countries."

"A larger share of executives also expects the good news to continue, with 47 percent expecting GDP growth to return to pre–September 2008 levels in 2010 or 2011, compared with 40 percent
six weeks ago." Key point here is that this is an improvement in the indicator, not the actual growth signal (which would require a reading above 50%).

"Although the global news is good, there are marked regional differences; executives in the developed countries of Asia are generally the most optimistic, and those in Europe are the least." This tell us what we all knew - European companies are suffering still through the remnants of old pains, banks are yet to suffer most of their pains, and households - well, households in Europe are in a perpetual pain given sticky unemployment and slow consumption growth and household investment. Thus: "Everywhere except Europe, more executives describe the economy over the next several months as “battered but resilient” than say it is frozen, stalled, or regenerated." (see pic below)

So much for the European Century story.

But what are the causes of this pessimism in Europe / optimism in Asia scenario? One can speculate:

For example, despite all the crises, all public spending and monetary easing, business leaders worldwide still see Government regulation as one of top three problems (chart below). 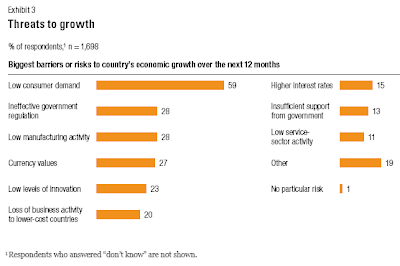 What this tells me is that structural issues that have precipitated the current recession have not been addressed. Can one be out of crisis when the causes of crisis in the first place remain intact? 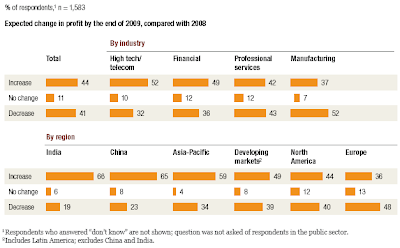 I am not sure how you feel about this, but it makes me very uncomfortable for several reasons:
Now take the outlook for 12 months ahead: 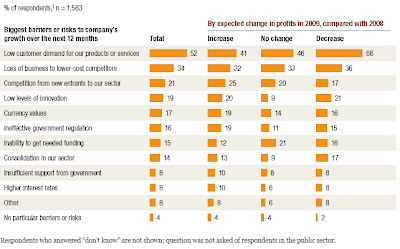 Let's look at this closer:
We can go on, but you can see where all this is leading us -
This is where optimism is now resting globally. We are, therefore, back to the paradigm of "Smaller Governments, Happier Economies"... and healthier households, one might add?
Posted by TrueEconomics at 9:13 PM

Hi Constantin,
McKinsey report is good but your analysis is the icing on the cake.
I see the Dow Jones shrugged off America's unemployment rate of 10.2%.
I guess once AIG, CITIGROUP and Bank of America get "free money" from American taxpayers to wipe out their debts., investors start buying.
A bit like in Ireland with Brian Lenihans NAMA, AIB technically bankrupt yet you had every tom,dick and harry buying AIB shares at 27 cent.