Last time I updated the numbers for global Covid19 pandemic, we were starting to spot the early signs of a new wave, Wave 4 emerging in new cases counts. Now, sadly, we can confirm exactly this development. 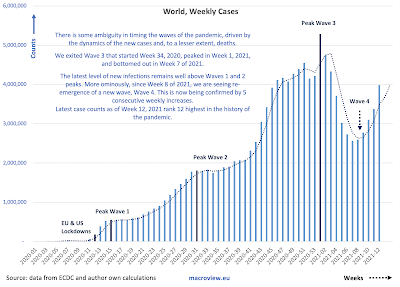 The virus does not care much for the bloviation of political leaders around the world. It does not care for Joe Biden's plans for the Fourth of July or State leaders' dreams of the Spring Break raves going on. It doesn't give a damn is European political establishment is running around the place like headless chickens, constantly re-jigging and gerrymandering performance and risk metrics in a desperate attempt to appease one side of electorate having previously tried to appease the other. The virus might care about the rates of vaccinations, but, hey it isn't worried too much: the rates are abysmally low (especially in Europe), and virtually in-extant in the emerging markets. If anything, with all this circus of 'policymaking' around, the virus is comfortably mutating. And, as mutations go, the ones that matter are the ones that reduce efficacy of our already senile public health interventions.
Aptly, the lags between the new wave launching in case numbers and the new wave starting to rise in deaths counts are pretty much identical to what we have seen in the past: 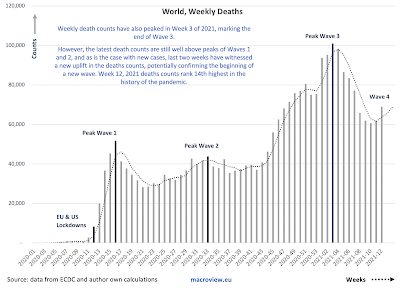 Yeah, right folks, deadliness of the virus is also staying put - steady as it has been going since the start of the now-firmly-forgotten Wave 3: 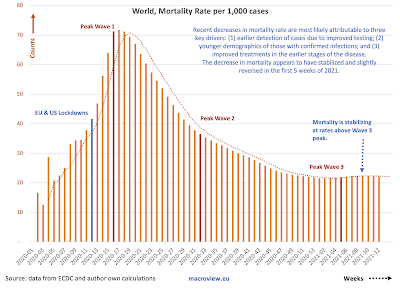 You get the view, right? The dressage of politicos promising 'relaxation' of controls is once again being followed by a blowout of the pandemic. And, in case you wondered, unless your version of 'relaxation of controls' involves gulping warm beer on Florida beaches during the Spring Break, don't bother: real constraints are still in place. Sure, Sam Jr can go to school. Sure he won't see much improvement in his studies, sure you do get a few hours of daily day-care-by-teachers so you can ... wait... do what? Hit the Walmart? Cause you either have a job working from home, you have a job working in quasi-normal environment pre-pandemic-style, or you won't have a job, since 'opening' doors ≠ getting customers into them.

Posted by TrueEconomics at 2:42 AM