In the first part of the series of updates on the U.S. labor markets, I covered continued unemployment claims (https://trueeconomics.blogspot.com/2021/04/2421-us-continued-unemployment-claims.html), followed by the second post covering labor force participation and employment-to-population ratio (https://trueeconomics.blogspot.com/2021/04/2421-us-labor-force-participation-and.html).

Now, consider total non-farm payrolls - a measure of jobs present in the economy: 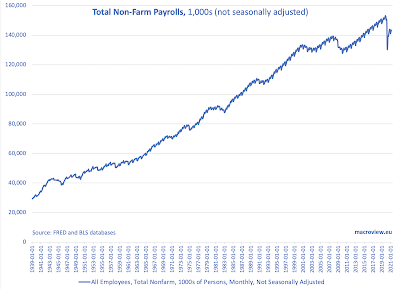