Now, the last of the series of posts on U.S. labor markets, concluding with America's Scariest Chart, plotting the index of employment (jobs) in the U.S. based on each recession-recovery cycle: 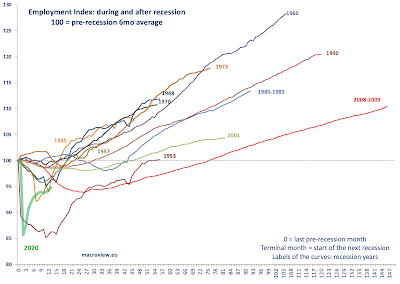 Despite some positive headline numbers on some labor market metrics, jobs creation in the U.S. is not  progressing well-enough to claim any end in sight for the Covid19-induced recession. Current reading for jobs index, relative to pre-recession highs is woeful. So woeful, today's state of U.S. markets ranks as the second worst jobs recession in modern history, so far, worse than the Great Recession.

Good news is that in March, pace of recovery accelerated from a major slowdown experienced in the first two months of 2021. The bad news is, unless this pace is sustained, we are risking a scenario where unprecedented policy (fiscal and monetary) supports unleashed since the start of 2Q 2020 will be associated with a jobs recovery that is second-third worst in the modern history of U.S. recessions. Time will tell.

Posted by TrueEconomics at 7:13 PM