Now, lets take a look at the data for External Debt maturity profile for the economy. The reason for why this is of importance is that currently Russian enterprises and banks (even those not covered by the sanctions) have effectively no access to dollar and euro funding in international markets, making it virtually impossible for them to roll maturing debts.

Chart below shows the quantum of debt maturing over the 18 months between January 2015 and through June 2016. The total amount of maturing external debt to be funded by Russian state, banks and enterprises is USD138.796 billion. 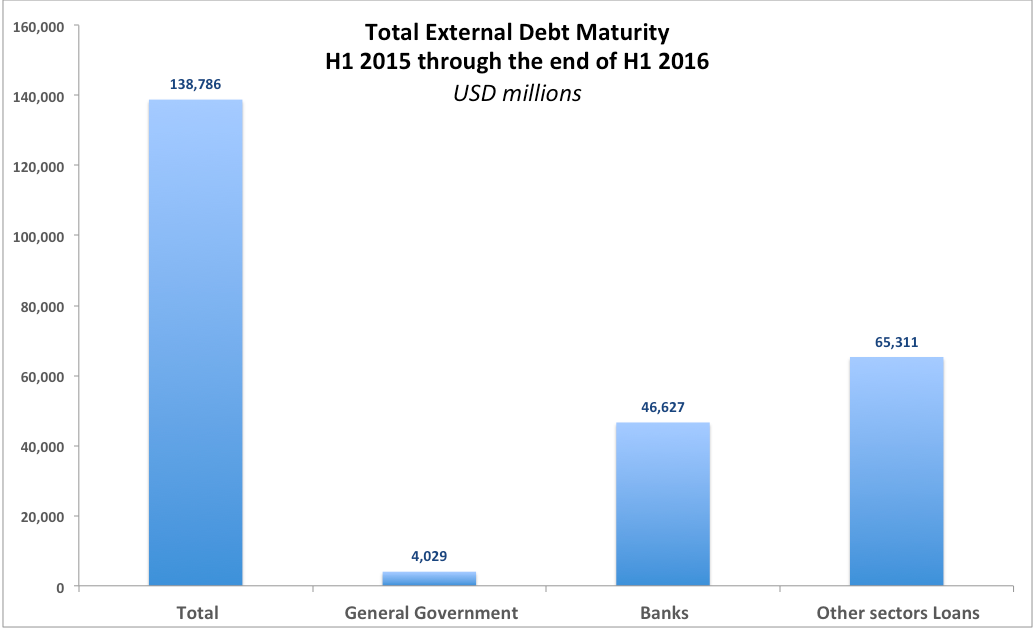 Of this, just USD4.03 billion is Government debt (or just 2.9% of the total maturing debt). Which pretty much means there is no public debt sustainability issue in sight as the result of the sanctions no matter what debt ratings are issued to the sovereign.

Almost two thirds of external debt coming due over the next 18 months is Non-financial Corporate loans (USD65.311 billion or 63.5% of the total). This excludes debt liabilities to direct investors which add additional USD21.245 billion to the above total for the sector and the above total maturing debt. However, as it is written against the equity holders, these debts can be restructured separately from the direct and intermediated debts. Again, H1 2015 represents the highest burden on debt rollover/repayment with USD25.41 billion of loans maturing. This declines to USD21.1 billion in H2 2015 and to USD18.8 billion in H1 2016. 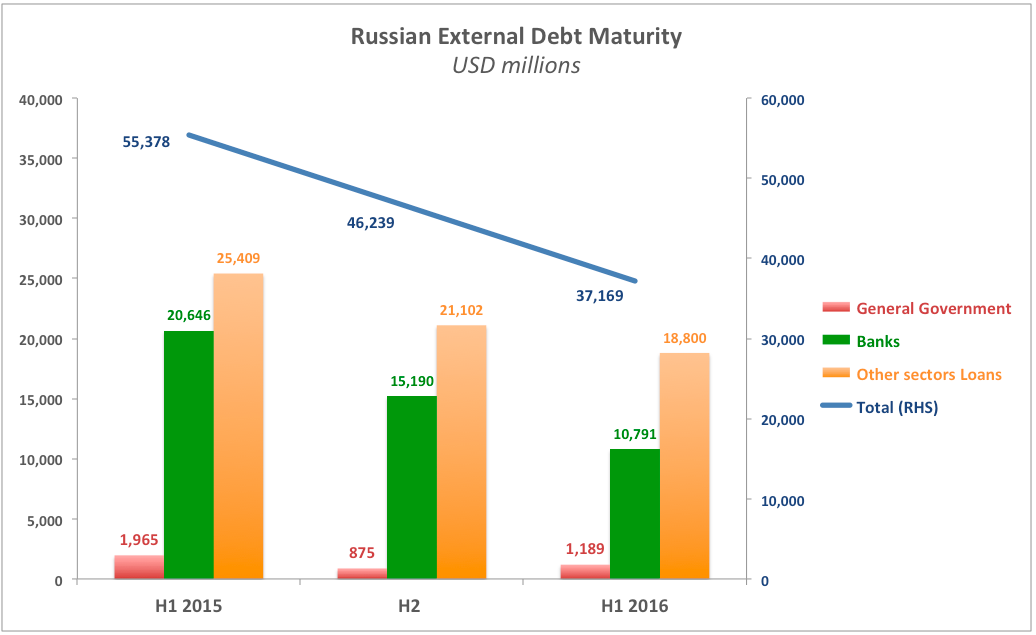 So to summarise, Russia is facing steep repayment schedule on non-Governmental debt in H1 2015, declining in H2 2015, with even more benign demand in H1 2016.  While Russian Central Bank has funds to cover the above volumes of redemptions, even allowing for adjustments to the funds for liquidity risk, the quantum of debt maturing in the next 18 months is high and will require some significant strain on cash flows of the enterprises and possibly significant injections of funding from the state.

The obvious question is: how much equity will migrate from private ownership to state ownership in the latter case.
Posted by TrueEconomics at 10:17 AM

Dear Constantin, thank you for your interesting post. Yet, I believe that the sharp rouble depreciation is to pose a risk to the Russian banking sector. While a weaker rouble boosts the revenues of the government and corporate sector via higher export revenues of oil and gas, the revenue stream of the banking sector will not go up with a weaker rouble, but the payments for foreign currency debt will. http://goo.gl/24DbLZ